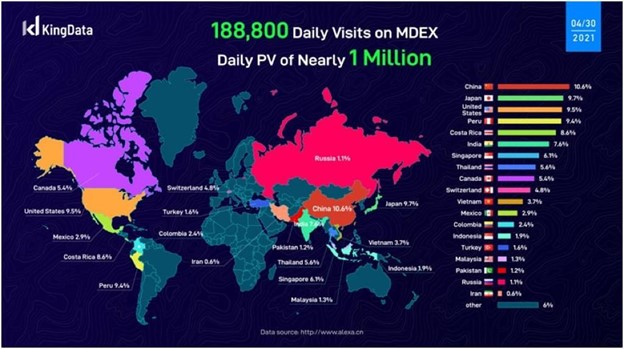 Reasons Why MDEX May Overtake Uniswap

DEX systems are decentralized exchange systems or platforms which provide anonymous opportunities to exchange cryptocurrency. Mdex (MDX) is a brand-new trading system in the DEX protocol. Mdex was launched in the month of January only of this year i.e., 2021. The grand entrance of this unique DEX system was immediately followed by its increasing popularity that was marked by it gaining the number one position in the digital exchange market.

It is only been very few months since the arrival of Mdex, yet this has already started overtaking slowly the DEX system supremos and the top players in the market like Ethereum’s Uniswap and SushiSwap, Binance Smart Chain’s PancakeSwap, and also the 1inch exchange in terms of popularity, gaining the number one rank among the DEX systems overthrowing Uniswap as in March 2021.

Slippage happens in the cryptocurrency trade market when the trader has to deviate from his expected transaction price and has to go for a different price due to an unpredictable shift in the price of the particular order between the time of the placement of the order in the market and the finalization of the trade.

Mdex very efficiently slips this slippage problem, literally, because of its unique developmental features that are designed to employ an automated market-maker i.e., AMM which aids in the implementation of low slippage amounts effectively for potential exchanges.

What makes this path breaking DEX system unique from the others is that this is developed on the basis of the dual chain model system.  Mdex works standing on both the Ethereum network and the Huobi Ecological Chain (HECO) network that efficiently allows this new DEX system to get the benefits of both the systems. The super-attractive low transaction fees involved in HECO exchange procedures and the beneficial deep liquidity feature of the Ethereum ecosystem collaboratively aid the Mdex system to work proficiently and effectively in the favour of the customer.

Mostly all the majority of the decentralized finance projects make their base on the Ethereum blockchain network as ERC-20 token assets, but taking into account some of its ongoing problematic status-related features like highly expensive and increasing gas fees, reduced transaction speeds, etc., the world’s no. 2 crowned blockchain ecosystem is somehow going down from its charm and is on the verge of losing its fellow DEX project members soon.

It is worth mentioning here that one of the bests in this field, Uniswap based on the Ethereum ecosystem also suffers from these downsides and thus is evidently losing popularity. On the other hand, Huobi Ecological Chain i.e., the HECO ecosystem is constantly increasing its reach and development, slowly but aggressively acquiring more and more of a firm place in the cryptocurrency environment. Now Mdex being a trading platform mainly built on the HECO network is surpassing all the other conventional DEX systems including Uniswap quite efficiently in both the fields of speed and cost.

Paying extra amounts as transaction fees in the DEX trading protocol can be efficiently avoided in Mdex trading platform. Several instances on Mdex transactions are there where exchange trading happened with zero amount of transaction fees, even sometimes resulting in the customer getting rewards for effective trading which as a matter of fact in the end settles down the transaction cost.

This means here in Mdex, the concept of negative transaction money is very much possible. Recent reports depict that MDEX has already handed out Its users an attractive amount of $280 million in the category of transaction mining rewards and also $200 million as liquidity mining incentives.

A tabular comparison between Mdex, Uniswap, and Pancakeswap systems of DEX trading is given below.

The current digital trading world looks for efficient trading platforms which offer the best of the features. Mdex being a DEX system cryptocurrency trading platform is providing its users superior speed & security, low to null transaction fees, advanced protocol compatibility, and much more.

Thus, Mdex provides a better form of cryptocurrency exchange built on the top of the network platform of HECO showing user-beneficial traits along with a token handling method the following repurchase and burn mechanism.