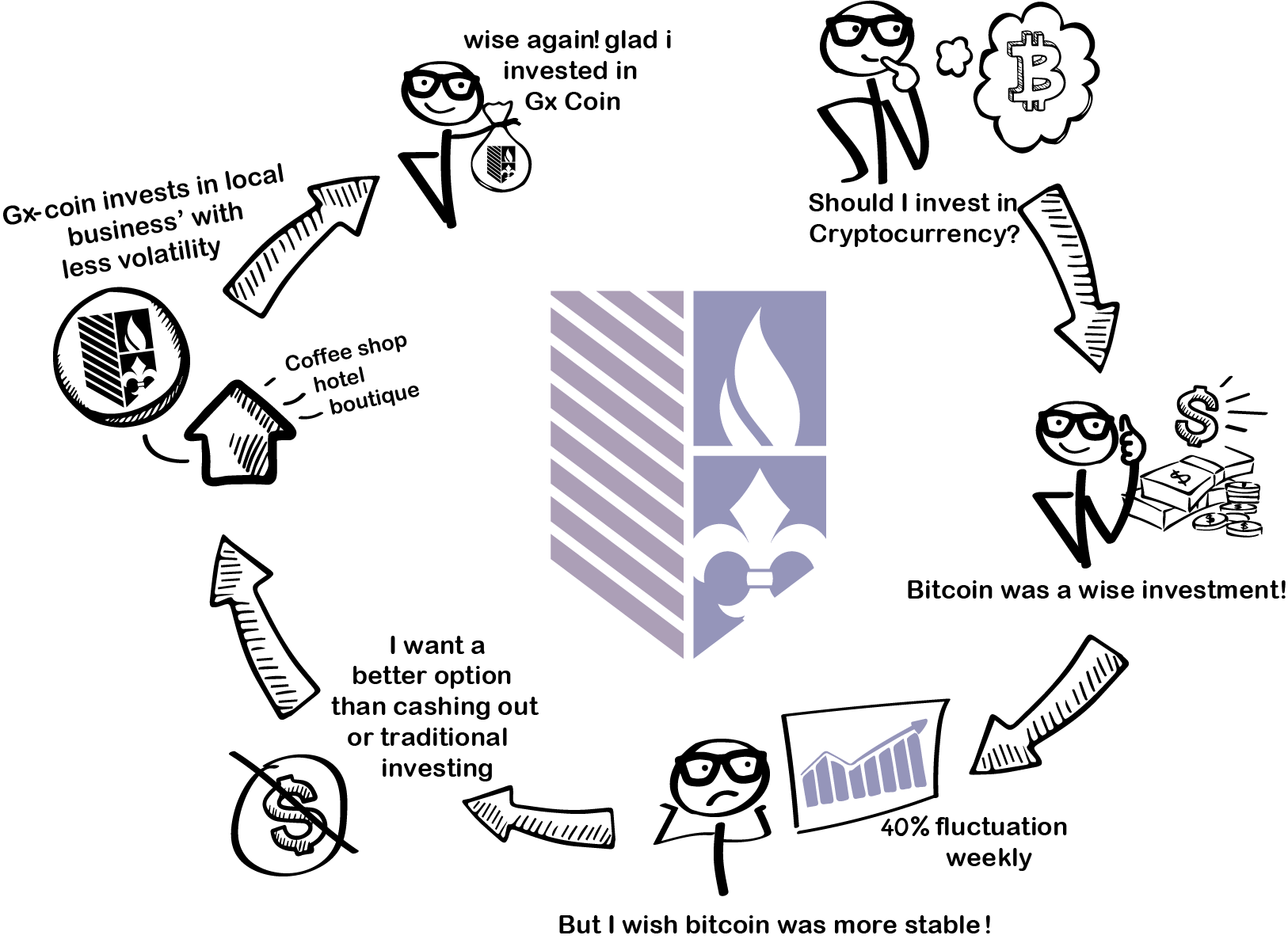 228 years after French revolutionaries stormed the Bastille, another French Revolutionary is taking cryptocurrency by storm.

Fabien Dureuil and partner Duane Kirkpatrick are bringing more than a half century of VC and business development experience to a new Small Business based crypto coin called “GxCoin.”

Dureuil and Kirkpatrick’s Venture Capital Firm, Genevieve Co, have recognized a chasm in the American economy, separating the twin forces of economic growth—small business and the middle class.

On one side of the chasm are small businesses.  These businesses account for almost of half of the United States GDP and 70% of American jobs, but 82% last fewer than 5 years and half of those closures are due to cash flow.

On the other side of the chasm is an enormous pool of prospective capital, middle-class investment.  America’s middle class are limited in their investment options and they’re participating in the traditional stock market at near record low rates (http://www.gallup.com/poll/190883/half-americans-own-stocks-matching-record-low.aspx). All told, almost 50 million American households have net worths above $100,000 but below $1 Million, which is the threshold for investment in venture capitalism (not including the value of one’s home).

These twin engines of American Economic Growth have the capacity to solve each other’s problems and GxCoin makes it possible.  Middle-class and upper-middle-class investors recognize the enormous potential in cryptocurrency but seek more stable and predictable funds.  Small businesses need more investment capital in order to realize their potential.  GxCoin solves both problems by creating a bridge to venture capital. “The emergence of services based on smart contracts, such as Bancor, represents a breakthrough in creating liquidity and stability,” says Dureuil, “while small business is, and will always be, a good way to protect token owners against speculation and inflation.”

Here’s how it works.  GxCoin is an Ethereum token designed as a distributed venture capital fund for small businesses. Under the guidance of Genevieve, the GxCoin organization will audit and score businesses on proven criteria such as availability of financial documents, debt, state of litigation, executive personalities, business plan and industry research.  If accepted, businesses will be presented to token holders in an advisory role to approve decisions by voting, and those officially chosen will receive monetary funding in exchange for an equity stake, along with assistance from various members of the community for communications, marketing, and business development.  Genevieve also works with the businesses’ executives to create their own token, prepare a strategic business plan, and create the roadmap necessary to succeed.

With GxCoin, the community shares resources, knowledge, and ideas and provides real-time feedback to participating businesses. This decentralization empowers businesses to be more active and aware, facilitating contributions directly to the local economy and empowering anyone to own part of these small businesses.  “Small businesses are the true wealth of our society and economy,” says Dureuil, “Genevieve is putting forth our best effort to catalyze and unleash this locomotive by combining the best of technology and finance.”

GxCoin has made investments in two businesses so far, with an additional four in the audit stage.  Depending on the total funds raised in the GxCoin crowdsale, investments may be made in up to 40 different companies and in amounts up to nearly half a million USD each.

Presale for GxCoin will end 12 am PST July 24th. During this limited period, GxCoin Tokens can be purchased for $0.66 USD exclusively from the Genevive Co website.

Specializing in wealth management and venture capital, Genevieve Co Works with clientele on a global basis from its headquarters in Salt Lake City, Paris and Singapore.  Genevieve founders have managed Venture Capital operations for more than 26 companies ranging from small businesses to publicly-traded corporations spanning 12 countries and 4 continents.