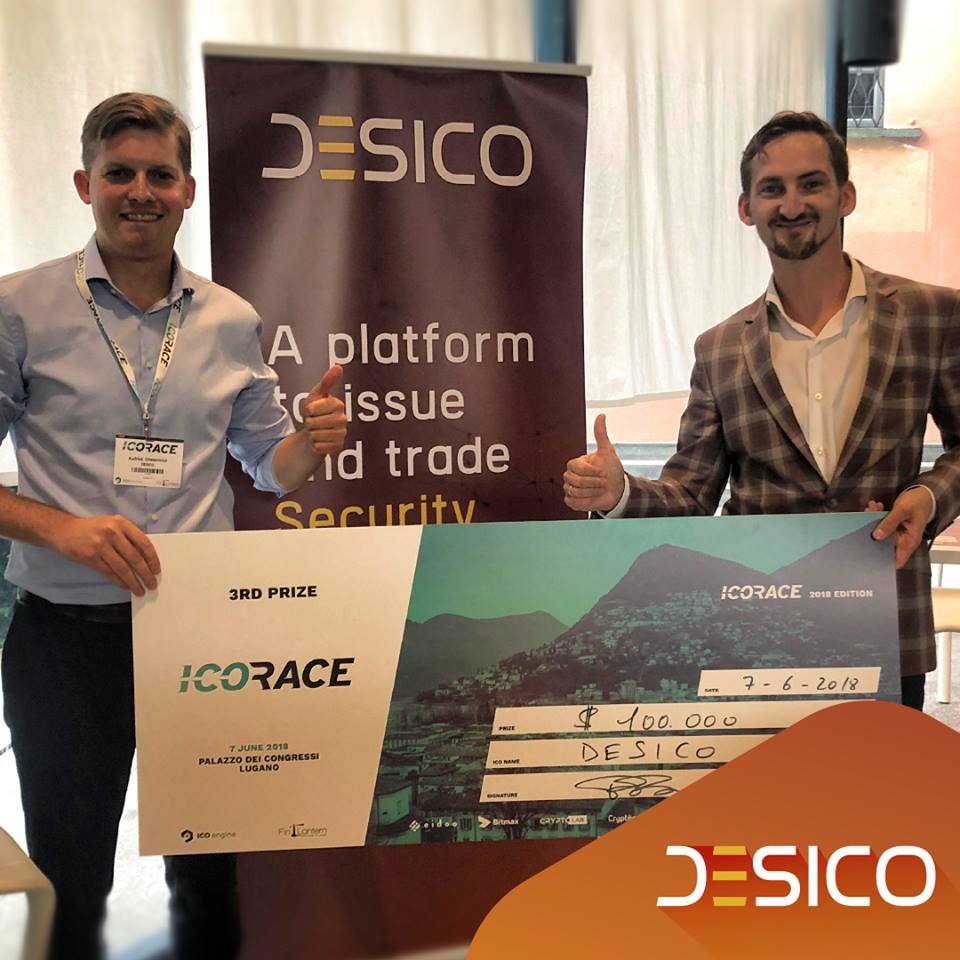 As a result of its game changing business model of issuing and trading fully legally compliant security tokens, DESICO ranked an outstanding third from 160 ICO-funded startups in the recent ICO Race 2018 competition in the southern Swiss city of Lugano.

ICO Race is a competition where the world’s most promising ICO-funded startups come together to pitch their business models to a panel of internationally-recognized ICO, blockchain, and finance experts.

The pitch made by DESICO CEO and co-founder, Laimonas Noreika, was enough for the panel to rank DESICO an outstanding third from 160 ICO-funded businesses who took part in ICO Race from the initial application stages, to the final pitching phase where the most-promising ICOs in attendance compete for a share of the $1m USD total prize. On top of gaining international recognition from the blockchain and fintech communities as a result of its bronze medal finish, DESICO will receive $100,000 in funding for the development of its business model, plus a $100,000 discount on products from the ICO engine accelerator.

As part of its legal compliance and assistance in the facilitation of the crowdfunding process for ICOs, DESICO will operate an in-built exchange. This exchange will provide immediate liquidity to any security tokens issued by any business listed on the DESICO platform, and be subject to the regulatory supervision of the Bank of Lithuania, which is under the control of the European Central Bank.

DESICO will also receive a European e-money licence, or have direct access to the services of an institution in possession of one. This will allow DESICO to execute payments and manage payment accounts. Therefore ICO-funded businesses using DESICO will be able to manage both their crypto and fiat holdings. DESICO will also give these businesses the opportunity to exchange their cryptocurrencies into fiat as way of developing their business.

“To rank amongst the top-three ICOs at ICO Race 2018 and be recognized by experts as one of the world’s most promising ICO-funded startups is a huge step forward for DESICO,” said DESICO co-founder and CEO Laimonas Noreika. “This achievement underlines that security tokens are the next big megatrend in crypto, and the industry needs legally compliant security tokens.”

DESICO’s achievement at ICO Race is not the first time it has received international acclaim for its business model of aiming to make security tokens a leading asset class of the future. In May 2018, The Ministry of Finance of the Republic of Lithuania stated that “DESICO is expected to foster Lithuania’s fintech and blockchain communities by promoting the settlement of global blockchain and fintech businesses in Lithuania.”

The DESICO token crowdsale will begin on 20 August 2018 and end on 01 November 2018. To keep up with the latest news and developments from the world of DESICO and the future of security tokens, sign up to the DESICO Telegram channel, and head to the website to sign up to its weekly newsletter.