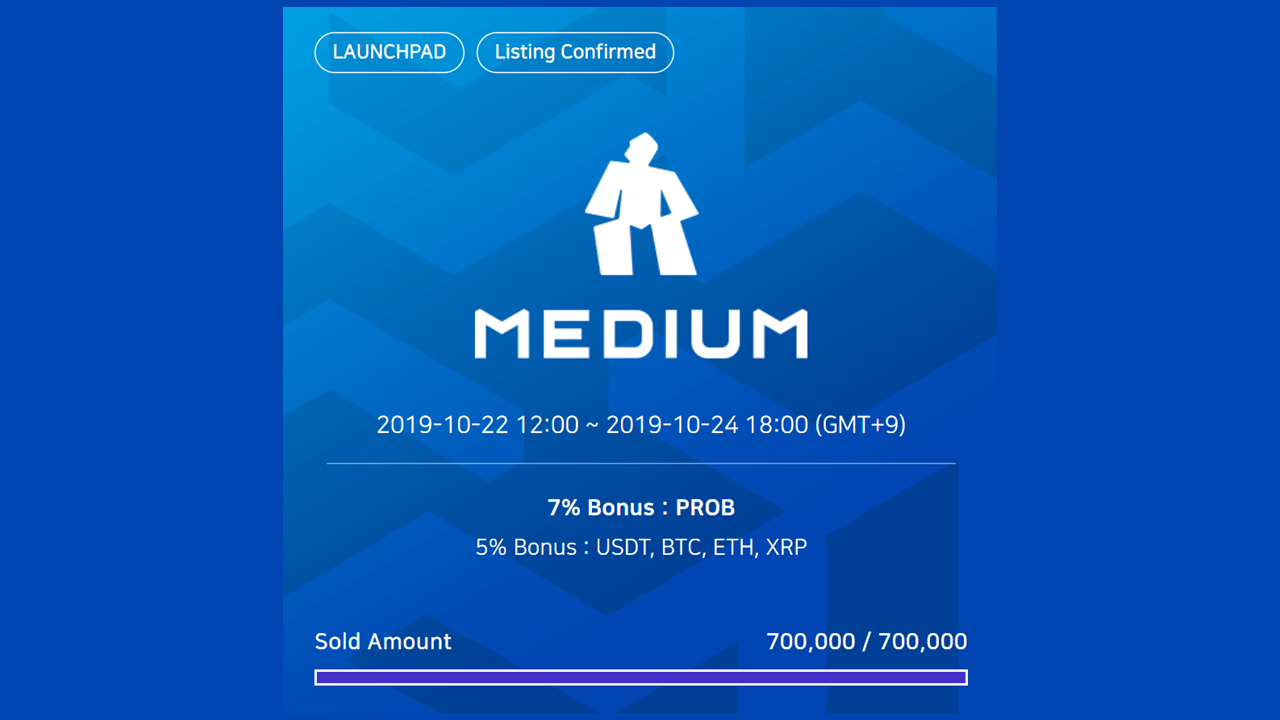 On October 22 at 12:00 KST, 4th generation blockchain Medium successfully sold out their entire allocation of 700,000 tokens and raised ~$350,000 during their Premium IEO on ProBit Exchange, one of the top local platforms in South Korea. It took just 40 minutes for all MDM tokens to be purchased along with the standard bonus features that have become a staple of their IEO packages.

Up next for the project is listing with many investors who missed out on the Launchpad looking forward to the opening of secondary markets for trading pair MDM/KRW on October 28 at 15:00 KST with wallet deposits opening up 3 hours earlier at 12:00 KST. Listing provides another opportunity of purchasing and trading for those who missed out on earlier rounds of token purchasing with readily available liquidity.

Secondary market offerings were a key component of strong ROI for previous Launchpads including SPORTX returns of 200% ROI, CPUcoin seeing a 40% jump, and even standard IEO offerings like AXEL delivering 400% for their loyal investors.

The resounding success of Medium’s Launchpad will help them achieve this very goal and promote widespread adoption as ProBit’s Launchpad slots continue to be highly pursued due to its strong track record of success in both primary and secondary markets.

The exclusive Launchpad IEO feature has already seen a string of success for previous projects due to the extensive and aggressive marketing initiatives aimed at producing global exposure for the few handpicked projects that manage to be selected. IEO has become ProBit’s calling card as they have orchestrated multiple sellout campaigns including $1,000,000 for Boltt, $200,000 for Steemhunt, $500,000 for SPIN Protocol, and $300,00 in Linux, all within the combined duration of a day with several rounds selling out in seconds.

Starting on October 29th, ProBit Exchange will introduce increased referral bonuses of 10-30%, a new VIP membership structure, decreased trading fees, and a new 10% discount on trading fees for referrees signing up with a referral code. With the young exchange rapidly approaching the one year mark of business operations as one of the top 30 exchanges, ProBit is now making inroads to global markets including Brazil, Indonesia, and Russia as one of the top international exchanges.