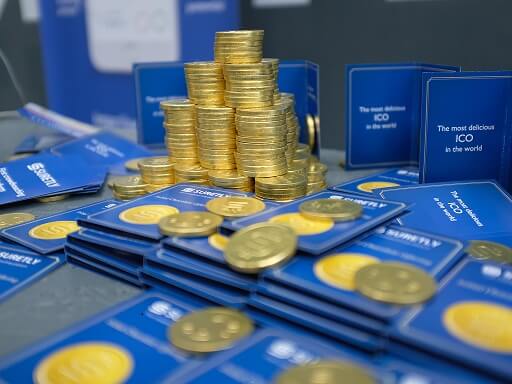 NYC-based startup Suretly, which raised $350K during preICO round this May, launched an Initial Chocolate Offering.

The event took place in Copenhagen, Denmark during Money2020 conference. All guests, who has visited Suretly’s booth, were gifted with a chocolate souvenirs shaped in SUR-token. Each token was packed in the individual memorable wrapping with the future Suretly ICO information.

We decided to bring a new meaning into the popular term of ICO and give an opportunity to feel a real taste of a true ICO campaign, – said Eugene Lobachev, Suretly founder, –

Our choco-token are made of delicious alpine chocolate and all cryptoinvestors will like the taste of it.

Suretly is a unique crowdvouching platform that offers an alternative to a conventional P2P lending practice. The crowdvouching model followed by Suretly works in conjunction with microfinancing organizations, where investors can vouch for a borrower by offering assurance to repay a portion of the loan amount in case of default.  In return for their guarantee, they will receive compensation based on the borrower’s credit rating. A decision of vouching process is made just like on Tinder: right swipe for Yes, and left swipe for No.

As a guarantee for future repayment Suretly will use not only fiat money, but also cryptotokens called SUR-tokens. The ICO of Suretly will be initiated by Singapore’s partner and starts on July,11 and there are lot of reasons for tokens to be sold very fast –  1,5 month ago the team raised about $ 350 thousand dollars, selling 50 thousand preSUR tokens with a significant discount, during Pre-ICO campaign.

The name of the platform is a mixture of two words “surety” and “surely.” The company was launched in Russia in summer 2016, and the team is now based in New York, Moscow and Novosibirsk. So far, only a demo version of the product is available in the U.S.

Two months ago Suretly has been nominated for the Benzinga Global Fintech Award in the “Best Lending Platform, Tool or App” category.