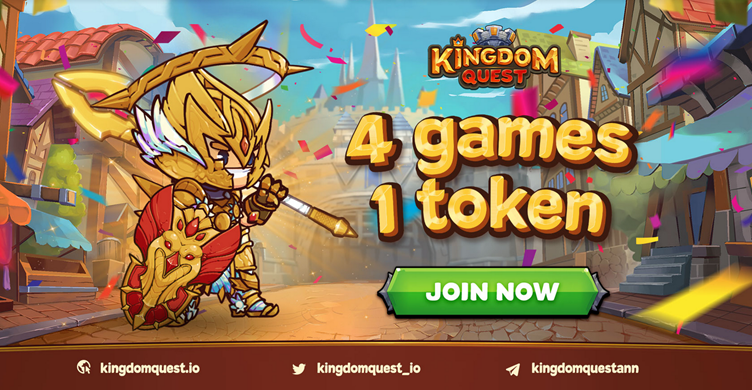 Kingdom Quest’s initial dex offering (IDO) of Kingdom Gold Coin ($KGC), a utility token for its GameFi ecosystem, will be open for registration on August 15th, 2022, with the IDO taking place on August 19th, 2022. Kingdom Quest has partnered with Shima Capital, Icetea Labs, and HuobiNFT. Following the token release, Kingdom Quest: The Beginning, a puzzle-based role-playing game (RPG), will go live on the Avalanche C-chain blockchain soon after.

Founded by a team of experienced and enthusiastic game developers, Kingdom Quest is a casual-game bundle absorbing blockchain technology. With the Enjoy And Earn model combining Play-Own-Earn and Free-to-Play, Kingdom Quest players can experience various game titles within an ecosystem that shares a native token and NFTs, and in-game assets can be exchanged among games to perform tasks and missions.

From the outset, $KGC can be used for specific utilities including:

Governance: KGC holders will be able to join the decision-making process on the development of Kingdom Quest products by voting for game-changing, monitoring the transparency of in-game activity, community treasury distribution ratio…

Crafting and unlocking NFTs: KGC is used as a fee for players to merge NFTs from NFT shards received during gameplay, as well as unlock locked items.

In-game activity and fee: KGC is the digital token circulated in all game titles in the Kingdom Quest ecosystem, which players use to purchase in-game items and energy, enhance heroes, upgrade skills and participate in special events.

Purchasing: KGC will be used for trading NFTs and in-game assets on the Kingdom Quest marketplace

Staking: Owners of KGC can “stake” them to earn interest, limited NFTs, perks, and privileges.

From now to 2024, Kingdom Quest will release 4 games in turn including Kingdom Quest – The Beginning which will be mainnet in September; “Forgotten Waterworld” – a farm game with Beta at the end of 2022; “The Vast Claudia” – an MMORPG title; “Defense of the Heroes” – a Tower Defense.

Kingdom Quest IDO will take place on August 19 on the launchpads: PoolZ, DoDo Dex, True PnL, Paragen, and MetaverseStarter. Register for IDO Whitelist and follow the evolution of the project on Twitter and via the server Discord.