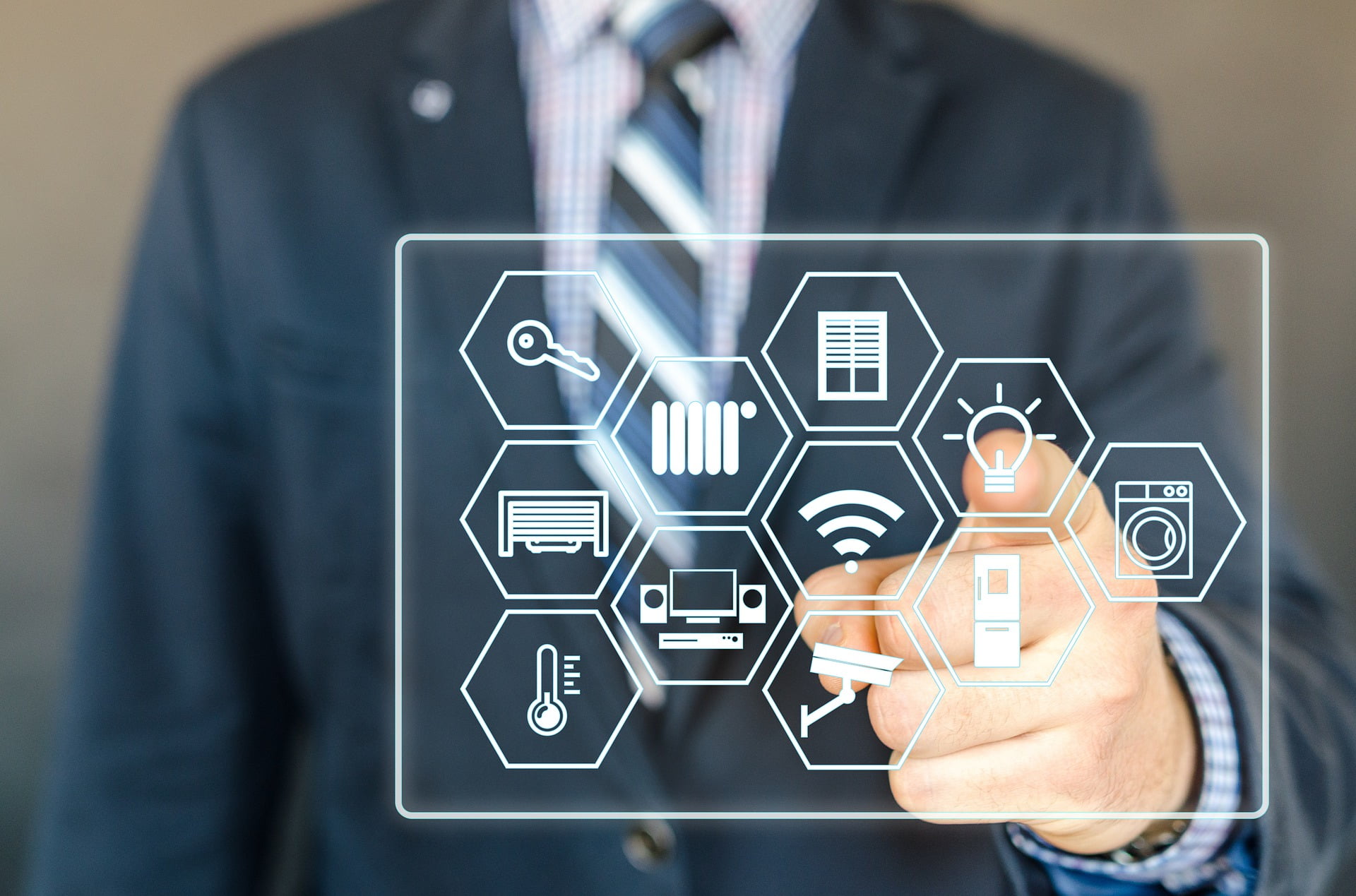 These Dapps Are Worth Looking Forward to in 2020

A decentralised application (or, DApp in short) is a computer or mobile application that runs through a distributed computing mechanism usually over a public blockchain like Bitcoin, Ethereum, EOS, TRON, V Systems etc. The distributed architecture of a DApp ensures that it cannot be shut down by a single actor and would need majority node participants to have consensus for any decision. Sometimes the term “DApp” is used in concurrence with “smart contracts” though they are not interchangeable. DApps use smart contracts to execute functions in a trustless manner. 2019 saw a major uptick in DApp users, with 2.77M new users joining the ecosystems across segments such as finance (DeFi or, Decentralised Finance), social media, gaming, gambling etc. Here are some DApps that are in the running for a great 2020.

DeFi apps, especially those based on Ethereum, have seen the most spectacular growth last year. Simple nifty platforms that allow users to lend, borrow and stake cryptocurrencies at the click of a button have been the flavour of the season and will continue to make headway into 2020. One of the most promising among these is Ethereum Foundation grant recipient Uniswap which is an automated protocol for swapping, trading and staking (lending) Ethereum and ERC20 assets. Anyone can create a market for an ERC20 token by staking (pooling) $ETH and equivalent amount of tokens which others can trade from, thereby creating a trading pool while the stakers earn a fee from the trading activity. As on 24th Jan’20, Uniswap has a trading volume of USD 1.6M+ and its pools have USD 44M+ in $ETH locked up or staked which is a testament to market confidence on the platform. 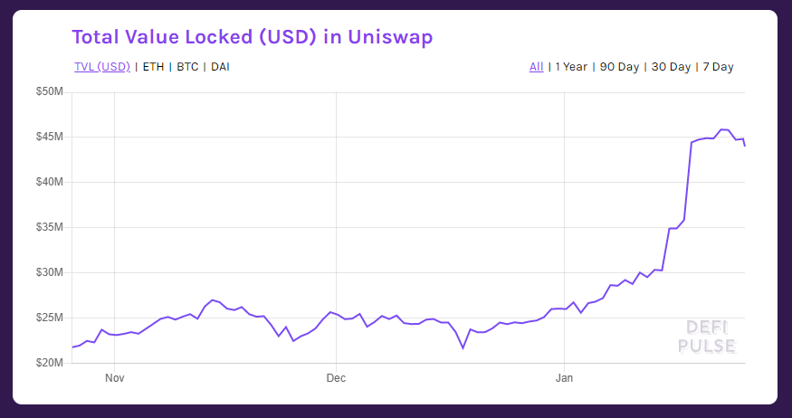 As political uncertainty, protectionist policies and brinkmanship gain ground, there have been growing instances of authoritarian regimes across the world clamping down on freedoms through restrictions, censorship and surveillance. Consequently, there has been higher adoption of technologies that empower individual freedoms. One of these are dVPNs or, decentralised Virtual Private Networks. dVPNs allow users to transact data over public networks privately in a trustless manner, usually through blockchain governance. In 2019, VPN applications were downloaded 480M times which is a 54% rise compared to last year as per a latest report. And this trend will continue in 2020 with platforms like Tachyon Protocol having launched their VPN service alpha version in Q42019 already. Backed by global VPN brand, X-VPN, Tachyon is built on the V Systems blockchain and is led by Proof of Stake inventor Sunny King. With nodes being set up across all continents (except Antarctica), the network is set to be in place through the year in order to be sufficiently distributed.

The end of 2019 saw a slew of censorship-related events from centralised platforms like YouTube suddenly removing hundreds of crypto-related videos without a recourse, Google banning Ethereum wallet Metamask from Play Store for a policy that didn’t apply to Metamask etc. Though most of these punitive measures were reversed subsequently, it brought fore the ills of centralisation especially when it comes to content creators. Subsequently, censorship-resistance has been a growing call. DTube, built on the STEEM blockchain, is a decentralised alternative to YouTube. With a feature to import content from YouTube, DTube allows creators to seamlessly shift to it. With close to 70k unique users already, the platform is poised to make an impact in 2020.

The start of 2020 saw a bombshell of a news in the form of Microsoft revealing in a blog post that back in December of last year a security breach leaked out customer support data that included information such as email addresses, IP addresses etc. Cloud breaches like these have been far too common in the past few years. While governments and authorities often seek data sovereignty in light of such events, it turns out that those demands are geography-specific and would end up creating administration-owned centralised repositories waiting to be hacked. Personal data sovereignty is more in line with what is needed. Opacity is an anonymous file storage solution on the blockchain that has been gaining traction. Only end users have access to their stored data through private keys or, what is known as Opacity handles. It’s zero-knowledge cloud storage means no one can look up your stored content, not even the platform itself.

Every year, we see a multitude of wallets and tipbots making their way to crypto – some custodial, some not. While some of these wallets have gone on to build userbases running into millions, there aren’t many popular tipbots or peer-to-peer platforms where cryptocurrencies can be exchanged instantly. This is because blockchains still haven’t scaled to the point of getting to zero latency transactions. ParJar provides a simple solution to this by settling P2P transactions (or, tips) off the blockchain (thus making them instant) while deposits and withdrawals to and from balances continue to happen on-chain. As a result, this is the only product in this list which is a combination of a centralised and decentralised architecture and is hence not a pure DApp. However, launched in 2019, it has turned out to be hugely popular with 25k daily active users and 750k+ completed transactions (tips, deposits, withdrawals) already. ParJar currently runs only on Telegram and supports $BTC, $ETH (and a list of ERC20 tokens), $LTC, $DOGE and $BCH.

And finally, while gambling is easily a high-risk activity and low on recommendation lists, the following DApp has been raking in new users every day and getting high engagement nonetheless. So if you’re into e-gambling or raffles, here’s something that could catch your fancy:

Even though DeFi has gained a ton of new users last year, gambling continues to be more popular and captures the highest volumes among DApps. As per a recent DApp.com report, this segment saw transactions totaling USD 6.71B (in 2018 it was USD 3.39B). TRON leads this category with its DApp WINk seeing consistent engagement from users. Formerly known as TRONbet which was the first DApp released on TRON, WINk is a decentralised gaming/gambling platform that was launched on Binance last year after a rebrand. In spite of its high-risk nature, it has seen consistent growth in user numbers and transaction volumes over time and will possibly continue to be so in 2020. 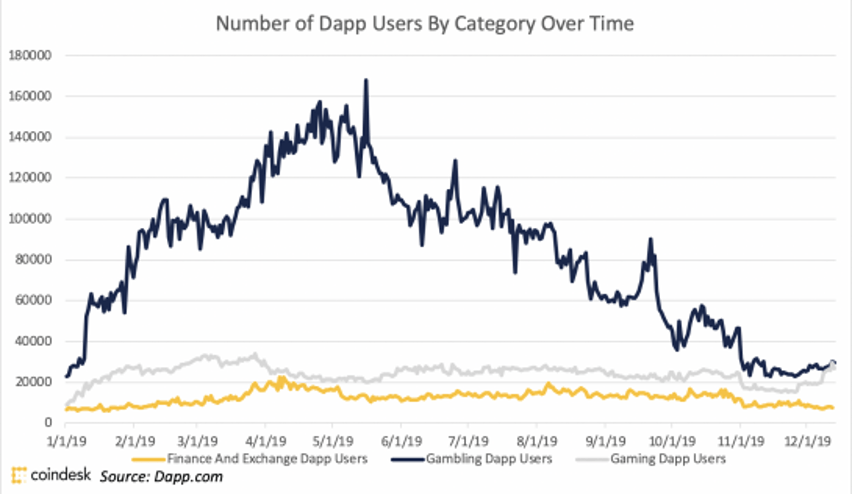