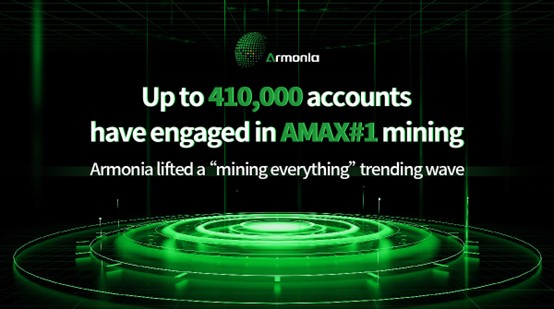 Up to 410,000 Accounts have engaged in AMAX#1 mining, Armonia lifted an “Everything Farmable” trending wave

Until the end of AMAX#1 mining on September 16, Armonia’s first mining pool made a great hit, which broke the industry record and also led ”Everything Farmable” to become an industry hot topic. It is estimated that up to 410,000 Accounts have engaged in the AMAX#1 mining, among which the strongest miners mined 220.6 AMAX with 130,900 APL, and 5000APL tier mining pool rewards were snapped up within 3.5 hours. This outstanding success of Armonia AMAX#1 highlights the unique value of Armonia’s concept of “Everything Farmable”, and also shapes the prosperous future of “Everything Farmable” in the blockchain industry.

As the height of the mainstream blockchain like BTC and EOS continues to rise, the mining arithmetic power is becoming more and more concentrated. Along with this, it leads to the increased difficulty of mining and the threshold of participation. In order to address the pain points of the current blockchain industry and endow more people with opportunities to participate in the construction of blockchain, Armonia innovates the traditional mining model and realizes “Everything Farmable” through converting user ecosystem behavior to ecosystem construction.

As it is known, the realization of Armonia’s “Everything Farmable” relies on a dual flywheel model. On the one hand, users get APL rewards by using xChain, APLink,NFTOne, MetaDAO and other Armonia ecosystem applications or picking apples in the “farm”. On the other hand, users can put APL into the ecosystem construction mining pool to get AMAX rewards. As the Armonia ecosystem applications become richer and richer, users can get APL in more diverse ways, and they will earn more lucrative AMAX rewards by putting APL into the ecosystem mining pool. All participants can share the dividends of the development of the Armonia ecosystem, thus creating a virtuous cycle of Armonia’s ecosystem building.

Driven by Armonia’s dual flywheel model, users enthusiastically participated in the mining campaigns. Armonia AMAX#1 mining pool, since its official launch on August 28, has quickly lifted a mining rush among users and set off a boom in the blockchain mining industry. In this mining campaign, the 5000APL and 500APL tier mining pools were the most popular, of which the 5000APL tier mining pool was the first to be mined and the reward finished its claim within 3.5 hours, setting a new record for the industry mining. The top 10 miners redeemed a total of 765,400 APL with an additional reward of 57 AMAX of each, demonstrating the hardcore strength and activeness of miners, and showing that the majority of users are optimistic about the prospects of the Armonia ecosystem application.

Standing at the new outlet of the industrial revolution, Armonia is continuously increasing its investment in technology research to solve cross-chain security issues. Through its child and parent chain platform technology, Armonia creates a muti-application ecosystem, bringing rich and diversified application scenarios for global blockchain users.

According to the ecosystem construction plan, Armonia ecosystem mining pool will be opened from time to time, which is expected to open once every quarter. As xChain, APLink,MetaDAO, NFTOne and other ecosystem applications launch online in the subsequent plan, users are encouraged to experience these ecosystem applications to obtain and accumulate more APLs. By then, the AMAX#2 mining pool will be officially opened for mining, and users will have the opportunity to redeem in priority and get the best benefits first.

In the future, Armonia will continue to work with more developers to develop ecosystem applications and join hands with more users to participate in Armonia’s ecosystem construction, making “Everything farmable & Everyone mining” become a new lead in the blockchain industry.