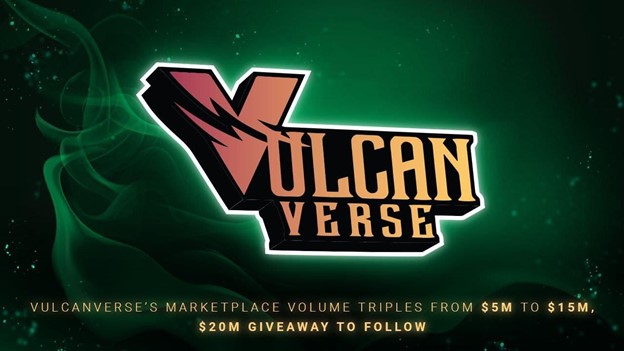 The gaming platform is positioning itself as a pioneer in NFT-based gaming, an area that has recently seen a huge surge in interest as a result of the wider NFT-mania that permeated the cryptocurrency market earlier this year. VulcanVerse expects to capitalize by converting this newly-found interest in online gaming into increased adoption for its own unique virtual world.

With that aim, VulcanForged, the project behind VulcanVerse, has made several integrations with other blockchain-based platforms, including Polygon (formerly Matic), to broaden its reach. The team recently completed a sale for the platform’s native token, PYR, aimed at stimulating activity in its in-world marketplace. VulcanVerse wants to establish itself as a leader in decentralized gaming.

Indeed, both have increased demand for VulcanVerse’s fantasy platform. PYR completed a successful token sale just over three weeks ago which led to a threefold increase in the volume from $5 million to $15 million on the platform’s marketplace, Vulcan Marketplace. The marketplace, which allows users to trade NFTs used in the fantasy game, is now one of the top five NFT marketplaces in the cryptocurrency space as a whole.

As well as arctic as the native currency for the Vulcan Marketplace, PYR is also a utility token that can be used for staking, fee settlements, DeFi game launchpads, platform pools, and play-to-earn benefits as well as discounts for items on the Vulcan Marketplace. PYR is now available on Uniswap and Quickswap DEX.

In addition to sound economic performance, both for PYR and the platform’s own marketplace, VulcanVerse’s team has been pushing ahead with a number of integrations to sure up the platform’s infrastructure, as well as attract new users. The team has partnered with several leading blockchain platforms, Arkane Network and Polygon. The most recent Polygon partnership sees PYR launched on the Polygon network via an adapted version of the network’s Plasma feature, a layer two solution that aims to fix Ethereum’s scalability issues. The objective is to ensure VulcanVerse’s infrastructure can handle any increased output generated by an expected influx of users as the game expands as well as gain support from more established projects.

In a bid to incentivize even more growth, the VulcanVerse team is conducting a $20m PYR giveaway, the details of which can be found here.

As well as good macro-performance, VulcanVerse’s gaming world is a carefully scripted and rich environment itself. Land is integral to the in-world gameplay, with users able to buy plots of 20×20 square meters to build on or sell later at a higher price. Although new users can explore the universe without owning land, certain features of play are only available to landowners in order to encourage the evolution of the environment through building.

Each plot of and the tools used to build on land are associated with specific “levels” all themed after Greek mythology. Users unlock these levels in gameplay, with each new level producing higher-value land and a more complex set of building tools.

As well as land, the VulcanVerse hosts NFT-based creatures called Vulcanites. Each Vulcanite is unique, has a tailored lore and set of skills that can be upgraded. They can be used to forage materials, compete for exclusive NFTs during treasure hunts or participate in community-led mini-games and side-quests. To balance world-building and interactivity, they provide benefits for their owners and help them level up but cannot be used to negatively affect others (e.g. they cannot attack players unless it’s part of an event).

Vulcanites can be traded as 2d game cards on the VulcanMarketplace where users can browse other users’ Vulcanite stats.

VulcanVerse is a virtual world set in the Greco-Roman era. It is a stand-alone game that uses blockchain technology to enable users to truly own their land and assets. Its detailed lore is written by the authors of Fighting Fantasy, a series of successful single-player role-playing gamebooks created by Steve Jackson and Ian Livingstone. Additionally, the virtual world boasts complex gaming tools and multiplayer game-playing functionalities.

VulcanVerse is blockchain-based, with key items in the virtual world existing as NFTs on a purpose-built blockchain. Its virtual world can be accessed via a downloadable application that recently became available on Google’s Play Store.

The team behind the virtual world consists of a number of veteran online gaming developers and enthusiasts, selected from a wide cross-section of gaming companies including Vulcan Forged, Serv Reality, Spark Labs, and Fabled Lands Ltd.

For more information on how to become part of the VulcanVerse, visit their website here.

VULCANVERSE is the source of this content. This Press Release is for informational purposes only. The information does not constitute investment advice or an offer to invest.