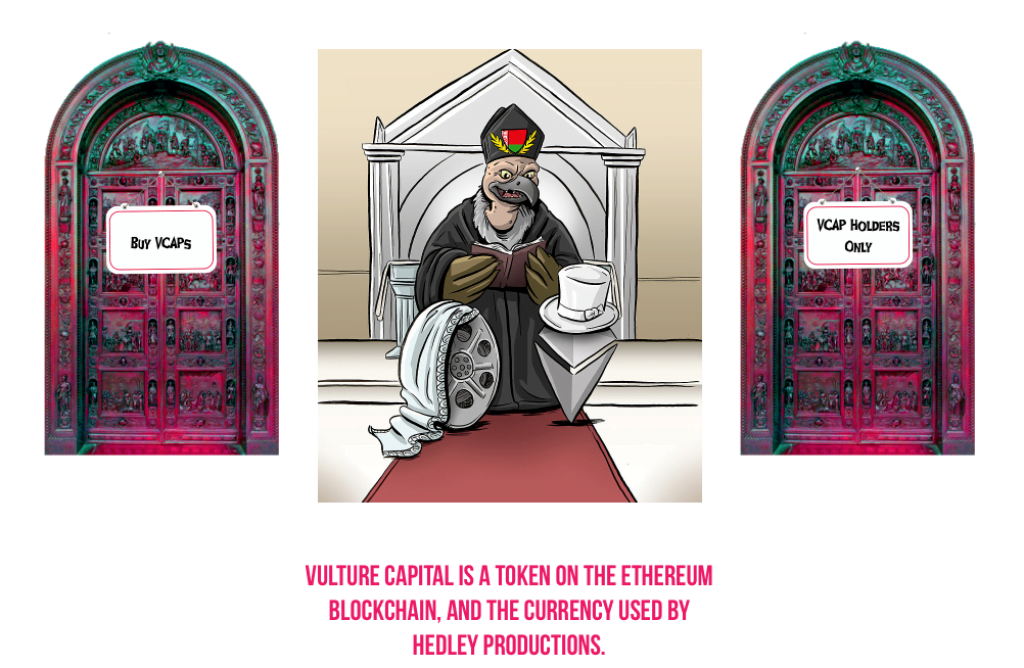 October 21, 2016, New York – Hedley Productions is happy to announce its success in introducing cryptocurrency to the film industry through its VCAP crowdfunding campaign. The VCAP campaign has so far raised the minimum required amount to start the pre-production and casting process for its upcoming feature film, Listen Carefully. With Hedley Productions continuing to raise the required amount through ongoing VCAP crowdfunding as well as new film and tech investors, the shooting has been moved to March 2017 from the later part of this year. To show transparency and accountability, the VCAP community was consulted before changing the shooting dates and agreed upon this change.

The initiative to create awareness about the use of cryptocurrency in filmmaking though Vulture Capital has been a new experience for all those involved. Vulture Capital has already gained a community of loyal followers who it believes will be instrumental in promoting, supporting and investing in VCAPs toward the Listen Carefully project. Hedley Productions intends to maintain maximum engagement with VCAP holders and other investors to ensure that they are constantly updated about and approve of any new developments.

“While we got some very loyal VCAP pioneers during the crowdfund, the majority of what we raised to date was through companies with a focus on Bitcoin and Ethereum. Now that we’re expanding and showing more of what we’re going to shape into, we’re hoping to have more individuals buy VCAPs, because that’s how we can really start to have fun with people voting for the next feature and using Hedley Productions as a platform to let people know what they’re doing in the crypto space.”

While Vulture Capital initially focused their investment efforts on the cryptocurrency community, they slowly began to garner the attention of the film industry where the first indicator of VCAPs success has been in the intersökest of industry professionals, who readily agreed to work on Listen Carefully out of sheer enthusiasm.

“Other than the director, we waited to tell most of the team what we were doing with funding for Listen Carefully. We wanted to be sure it had a chance of working. But as were started to sell VCAPs, we told some of the people we were looking to bring on to the team. Now some of the artists, performers, and the composer committed not just because they loved the project, but because they loved the idea of finding new ways to make film,”

To support the emerging Hedley community, Vulture Capital has merged its website with that of the production company, along with a dedicated members area to offer VCAP token holders an insight into the potential uses of VCAP. In the member’s area, VCAP holders can gain exclusive access to live feed and updates from Listen Carefully’s sets, Hedley Production content and news updates. With VCAP gaining more traction, interested investors can still make use of the ongoing crowdfunding campaign to invest in Listen Carefully and be part of the VCAP community.

Vulture Capital is a cryptocurrency token used by Hedley Productions. The VCAP is built upon Ethereum and it is being used to raise funds for the company’s upcoming project ‘Listen Carefully’ through the ongoing crowd sale.

Vulture Capital is the source of this content. Virtual currency is not legal tender, is not backed by the government, and accounts and value balances are not subject to FDIC and other consumer protections. This press release is for informational purposes only.