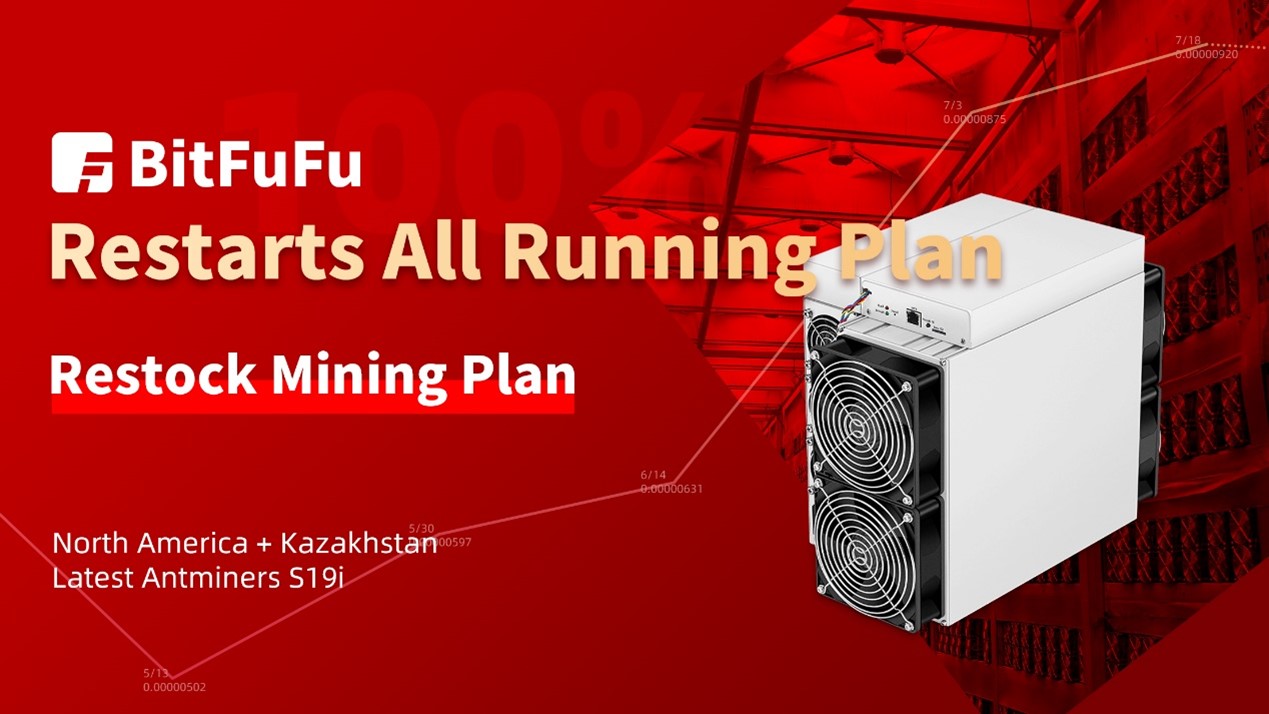 Since May 30, the BTC mining difficulty has lowered for 4 times in a row. The mining rig migration is continuing, leading to a surge of incomes in mining farms outside China. With the early layout of mining farms outside China, BitFuFu takes the lead to restart running plan and restock new mining plans. As the first cloud mining platform that restarts running plan in the industry, BitFuFu provides users with a mining feast from a drop of difficulty.

Thanks to its forward-looking layout in the mining farms outside China, BitFuFu outpaces other platforms to restart the running plan.

From the end of May, the shutdown of numerous mining rigs has resulted in 4 consecutive declinations of mining difficulty since May 30. The cloud mining industry has not been spared and several platforms refunded affected mining plans. Related losses were borne by users, and some platforms even directly took related businesses off the shelves.

At this point, BitFuFu has signed a ten-year strategic cooperation agreement with Bitmain and pre-booked loads from several mining farms outside China to quickly switch mining plans purchased by users to these mining farms for operation and safeguard their interests.

BitFuFu speeds up its mining rig migration and strives to restart the running plan. One aircraft can transport about 4,000 sets of mining rigs. To migrate mining rigs at the fastest speed, BitFuFu takes comprehensive actions and charters planes to deliver mining rigs to Kazakhstan, North America and other places for several times. In addition, this platform assigns special persons to maintain 24h communication with logistics, airports, customs and mining farms for timely negotiation and handling of problems in any link. All these efforts ensure a seamless, efficient and smooth connection between transportation, customs clearance, and installation of mining rigs.

It takes only around one week for the first batch of BitFuFu mining rigs sent to North America from takeoff to power-on. BitFuFu has successfully migrated tens of thousands of mining rigs in less than one month to restart all running plans with little impact on sold operating orders. All delivered mining rigs are the latest Antminers S19i, including 20,000 sets and 80,000 sets to mining farms in North America and Kazakhstan respectively.

Thus, BitFuFu becomes the first cloud mining platform that restarts all running plans in the industry.

The hashrate output per unit has risen substantially as mining difficulty declines. According to BTC.com, before the plunge on May 30, the income of per T (PPS) was 0.00000502 BTC, which soared to 0.00000920 BTC on July 20 by 83.27%. The currency-based incomes of mining rigs operating in mining farms outside China are rocketing.

Currently, loads in mining farms outside China are basically saturated, and newly-built or expanded mining farms won’t be put into operation until the end of this year. BitFuFu’s existing mining farms are available for immediate mining, and users can share the dividends from increasing output within the window period with lower mining difficulty. The new mining plan restocked by BitFuFu are sought after among users.

In addition to hashrate plans, this giant platform also unveils the combined service of spot and mining, which is sold out within 1 hour after pre-sale. Users can deliver a series of operations to BitFuFu, such as selection of mining rig, transportation, putting on shelf, operation and maintenance and accessing to pools. BitFuFu not only makes mining simpler but also offers users with advantageous prices and low electric charges through platform batch purchase.

Benefiting from full support of the mining behemoth Bitmain, BitFuFu can ensure mining rig supply with a beforehand layout of mining farms outside China and become the first platform to restart running plan in the industry. In February 2021, BitFuFu announced a strategic partnership with Bitmain to receive premium mining rigs and pools from Bitmain. In April of the same year, BitFuFu gets Bitmain’s strategic investments and gains further fund and resource supports. In the future, BitFuFu and Bitmain will join hands to debut and supply a new generation of knock-out products across the world.