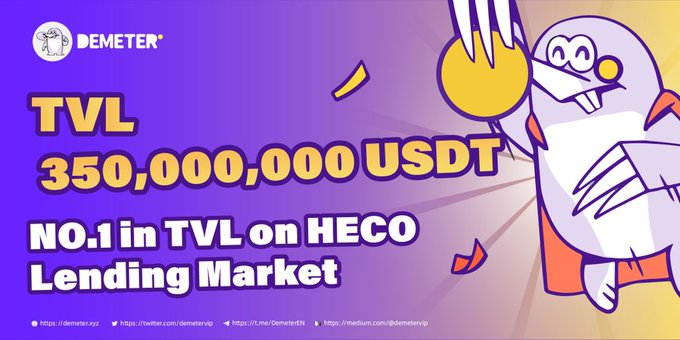 On September 13, MDEX successfully launched its new IMO for Demeter, a decentralized stablecoin market protocol, under the innovative IMO mechanism. More than 6,500 participants got involved in the launch, with more than 23 million MDX and more than 1 billion xMDX being staked. The total staking amount exceeded 350 million USD. Users on this platform will claim their new assets with one click at 20:00, September 17, and the principal can be withdrawn at the end of the lock-up period.

I. How important is the Maker on the Heco public chain?

Therefore, the fast-developing Heco public chain needs high quality decentralized stablecoin protocol to tamp the stability of its ecology value and expand the consensus. Demeter, as the phase II MDEX IMO project, may get multi-dimensional support from Heco in the later stage, as it will officially launch on Heco on September 18.

Similar to Maker, Demeter has two core functions: deposit + lending and stablecoin. Demeter also implements the dual token model of “stablecoin (DUSD) + governance token (DMT)”, there it achieves a high degree of transparency through a more complex mechanism designed to better protect users’core rights. In terms of product details, Demeter has made significant improvements on the design of MakerDao.

For deposit and lending, Demeter has improved the interest rate model and collateral coefficient of DeFi lending protocol. Moreover, Demeter has established a refined credit grading system which incorporates all existing crypto assets, and introduces richer crypto asset types such as LP assets, collateral assets NFT-fi assets, etc. Under the premise of ensuring security, Demeter provides maximum convenience for users by making the lending model between tokens highly compatible, and controlling the rate and volume of interest through smart contract. For Demeter itself, these innovative improvements are made to satisfy the needs of the market.

On top of that, to guarantee security, Demeter’s minting of lending/stablecoin is completed through over-collateralization. Demeter has established its “line of credit”by allowing borrowers to deposit tokens or synthetic assets into Demeter. Each underlying asset generates a collateral factor that represents the value of the assets staked by the user and corresponds to the percentage of available loans. Moreover, the loan interest rate varies depending on the supply and demand of each asset. If the borrower’s available credit falls below 0, the collateral will go into liquidation and be sold to pay off the debt.

The core feature for a stablecoin is that it keeps a stable price. The stability of DUSD’s price is guaranteed by two main innovative regulation mechanisms.

Demeter is expected to have even larger potentials with its advanced product design and a highly-optimized mechanism of token allocation and circulation.

Taken together, the multi-dimensional integration of concept, application, mechanism, tokenomics,and governance mechanism allows DMT to be a high quality token. Moreover, the latest IMO campaign of MDEX will expose DMT to users in advance.

IV. the Hunter program helps MDEX to become the discoverer and incubator of quality projects

Both decentralized stablecoins and decentralized transactions belong to the core DeFi protocol in the public chain ecology. Through the second phase of IMO campaign, the integrated advantages and synergy effects between MDEX and Demeter began to emerge. MDEX and Demeter are inseparably interconnected to bring out the effect of 1+1>2. Coinwind and Demeter are just the early representatives of the quality projects that MDEX and MDEX have mutually empowered, while the Hunter program, which was launched by MDEX at the end of last month, will continuously feed MDEX with Various quality projects.

The official announcement shows that the proposed total amount of the Hunter program is $10 million, which will give priority to funding projects in line with MDEX’s philosophy, and then focus on supporting high-quality projects themed on Metaverse, DeFi, GameFi, NFT, etc. When selecting popular projects, MDEX Foundation will take into account the condition of projects’ team, the projects’on-chain data, community infrastructure, and the innovation and growth space of the projects.