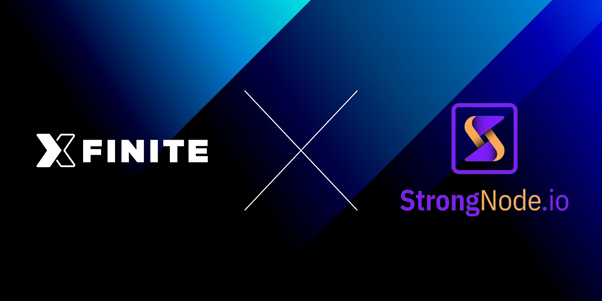 Singapore, August 30th, 2021. Xfinite partners with StrongNode.io’s  Node-as-a-Service (NaaS), a software venture and innovations lab. StrongNode has a unique approach to distributed edge networking by harnessing idle resources from digital devices in your home and office to build a strong, on-demand, and scalable network.

This partnership aligns with Xfinite’s global roll-out strategies. StrongNode.io technology will bring the processing of data closer to end-users to drive frictionless and finely-tuned compute power and also help expand the user base of Xfinite.

StrongNode.io is upending the traditional cloud computing paradigm and advancing decentralized networks while creating the best value and earning potential for Xfinite digital users. StrongNode.io CEO Daniel Saito is known for his work at NewsCorp, SEGA, and NTT DoCoMO.  One of his several exits was MySQL Database $1B+ exit to Sun Microsystems in 2008.

“Our last-mile edge network empowers Xfinite’s audience while reducing latency for its core products.  There are many projects that we will announce in the coming months. Xfinite leadership has aligned visions with our infrastructure plans,” stated StrongNode.io’s CEO, Daniel Saito.

“We have been hunting for decentralized node providers to align with our decentralized vision for our ecosystem participants, and we have strong faith in StrongNode as they can deliver the kind of scalability that we require. Their innovative software will enhance our strategies to reach our goal to bring our users the best possible experience and increase trust in our infrastructure choices,” stated Parag Arora, Chief Strategy Officer of Xfinite.

Xfinite is a leading blockchain-based platform designed to re-establish trust between consumers, content creators, and publishers. Through the use of viewer-based rewards, the Xfinite ecosystem helps the media and entertainment industry combat advertising glitches by increasing transparency and creating a new habit of engagement. For more information, visit xfinite.io

StrongNode.io is a Node-as-a-Service software venture and innovations lab that powers companies globally through its next generation of edge networking by uniquely harvesting a trifecta of idle compute resources and leveraging new blockchain technologies. We are delivering an on-demand, secure, and scalable node technology that will fundamentally reshape the future of how increasingly valuable compute resources are accessed and monetized. We are pioneering a new paradigm in digital connectivity. For more information, visit: strongnode.io