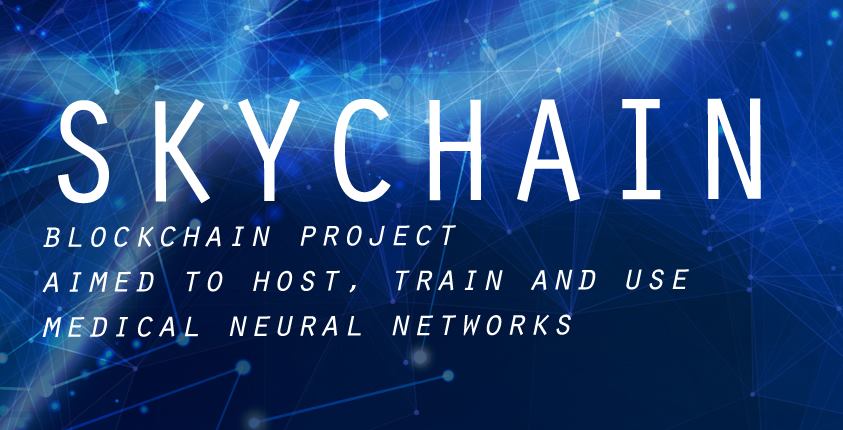 Artificial intelligence promises to transform our lives in just a few years. Alas, the healthcare industry currently lags far behind in terms of using AI systems. The reason is a lack of infrastructure to bring together healthcare big data owners, AI developers, and consumers into a single ecosystem.

Healthcare AI developers spend 95–99 percent of their budget to buy or license healthcare big data to train their neural networks. In most cases, startup companies specializing in that area can afford to buy only relatively small amounts of data, paying millions of dollars for them. As a result, their neural networks are usually undertrained and can detect only a few diseases.

Skychain Global will build the necessary infrastructure based on blockchain technologies. Its key idea is using smart contracts to facilitate interactions between healthcare big data owners, AI developers, and consumers. AI developers joining the Skychain ecosystem won’t need to buy big data, which will reduce their neural network training costs by a factor of 100. Each trained neural network will be locked forever in a smart contract and will be only available for use as a service. Each consumer using a neural network will pay a per-use fee, which will be automatically split between its developer, all the data providers whose data was used to train the neural network, and any other involved parties.

It’s a revolutionary approach that will reduce the healthcare AI training costs by a factor of 100. The opportunity to monetize healthcare big data will draw data owners to the Skychain ecosystem. As a result, there will be more highly accurate neural networks, which will increase the value of Skychain for the end users, that is, patients and doctors.

Skychain Global is pre-selling its tokens, SGH. The pre-sale ends on January 7, 2018. The tokens are currently sold at $0.50. During the ICO phase, they will be sold at $1. Then the SGH tokens will be converted into Skychain’s internal currency, Skychain Global Coin (SGC).

The important thing is that the project is based on existing, proven approaches and technologies in the area of artificial intelligence and big data. Skychain intends to create a data market using blockchain technologies and smart contracts, so that big data can be provided as a service for AI deep learning.

The future of artificial intelligence in healthcare

Currently we are only talking about medical diagnoses made by AI systems on par with the best doctors in their field of medicine. But accumulating vast amounts of healthcare big data in the Skychain machine learning ecosystem promises to bring unprecedented opportunities in the future. For example, artificial intelligence may be able to evaluate the effectiveness of a pharmaceutical drug or treatment regimen based on a billion case histories, discover new diseases, or develop the most effective treatment regimen for a patient. It might even be able to develop new pharmaceutical drugs and approaches to treatment! But if we want any of that to become possible, we need to accumulate massive amounts of healthcare data in the single ecosystem and make all of that big data easily available for neural network training. That’s the problem the Skychain project is going to solve!