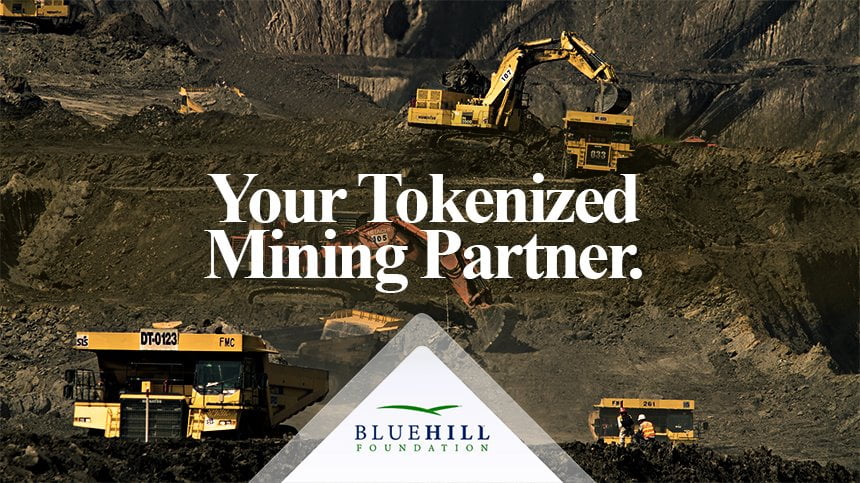 The Swiss-based company Blue Hill Mining is about to launch an STO funding operation after having discovered potentially one of the biggest copper reserves in Asia, not to mention the added discoveries of Nickel, Cobalt and…Gold.

Blue Hill Mining, a company based in Degersheim, located near the Crypto Valley in Switzerland, is about to launch a Security Token Offering in order to raise funds to further explore one of the world’s potentially biggest copper reserves. The Blue Hill Mine area is 70 times the size of the principality of Monaco and is located in Mongolia in between the two industrial giants, Russia and China.

After 8 years of geological research and planning, the Blue Hill Mine is showing not only a potential massive copper reserve but other precious minerals such as Gold, Nickel, and cobalt. The name “Blue Hill Mine” comes from the amount of oxidized copper on the surface, which gives it that blue-turquoise colour like its neighbouring mine Turquoise Hill. Turquoise Hill lies on the same metallic belt, which as of today is one of the largest copper deposits in the world.

The Goal of Blue Hill Mining

Blue Hill Mine’s goal is to further explore with continued drillings at greater depths to discover additional mineral ore bodies. This will dramatically increase the total amount of minerals and most importantly bring these estimated mineral deposits to proven International Standardisation for the reporting of the Mineral Resources and Ore Reserves using the world’s best advisors in the mining industry.

By merging the mining industry with Blockchain, “Blue Hill Foundation” found smart solutions for some of the hardest problems and issues in the traditional market by developing the first Blockchain fair-trade platform for raw materials of ethical origin, called “Blue Hill Platform”. This platform will bring direct benefits to fair trading, ethical mining and the economy by implementing policies approved by the Human Rights Committee. Blue Hill mining will accomplish this by directly connecting final consumers with mine owners, cutting out middlemen and representing a saving of up to 30% on raw material costs. The added benefit of this platform is the mineral traceability on where and how the raw materials were mined, that is still ineffective and opaque the traditional way.

Blockchains are where digital relationships are being formed and secured. Initial coin offerings allow startups to raise funds in exchange for cryptocurrencies.

The traditional sector has the Simple Agreement for Future Equity (SAFE), through which qualified investors can buy future equity in a company similar to a warrant. In crypto, there are Simple Agreements for Future Tokens (SAFTs) which allows investors to buy tokens that will be received at a later date and use them as utilities on the project’s platform. For the latter, even if the tokens were distributed, in most cases the underlying platform failed at implementation. What value do these tokens have in this situation?

That’s where security tokens come in to help investors. Any tokens backed by external, tradable assets may be classified as securities and, of course, be regulated as securities. In our case, if the token is issued by a company whose valuation can grow over time (depending on its performance), the owners of these digital assets inherit programmable ownership rights of the underlying company. An investment that is now protected by the securities laws.

“When investors are offered and sold securities, they are entitled to the benefits of state and federal securities laws and sellers and other market participants must follow these laws,” as stated by Jay Clayton, Chairman of The U.S. Securities and Exchange Commission.

Investing in a traditional sector such as mining used to be a relentless journey where brokers, financial advisors, and lawyers were involved, on top of you being classified as a qualified investor. For Blue Hill Foundation to make it possible for anyone in the world, with an Internet-powered device, and as little as €247 (~$277) to be able to invest in a large-scale mining operation, the use of the blockchain is essential.

The B.H.Foundation is managing a PRE-STO. As stated before, the BHM-Token is the digital proof of co-ownership of the Blue Hill Mine. It’s a security, a fully regulated, asset-backed token. And by securities law, it is available only to qualified investors, right? Exactly. That’s why, for you as a mainstream investor, the B.H.Foundation comes with another token, BHF-Token, an unregulated yet asset-backed token digitally available to purchase by anyone on their website prior to the exclusive STO via Blue Hill Mining.

Why Should You Buy it?

By bringing the estimated geological results already performed to international standards can bring the value of Blue Hill Mine to 334 times its current value. This will activate the buyback plan, in which each token will be re-purchased at 30 US dollars via Listing in the Toronto Stock Market.

A limited amount of BHF-Tokens is available today allowing you to take full advantage and to participate in the real mining industry. For the first time, the profit is in the hands on the individual token holders rather than the corporate giants, thanks to the transparent blockchain technology. Visit bluehillfoundation.com and acquire your BHF-Tokens at preferential price starting at 0,06 US dollar per token.