The Crypto Wire From New York To Las Vegas 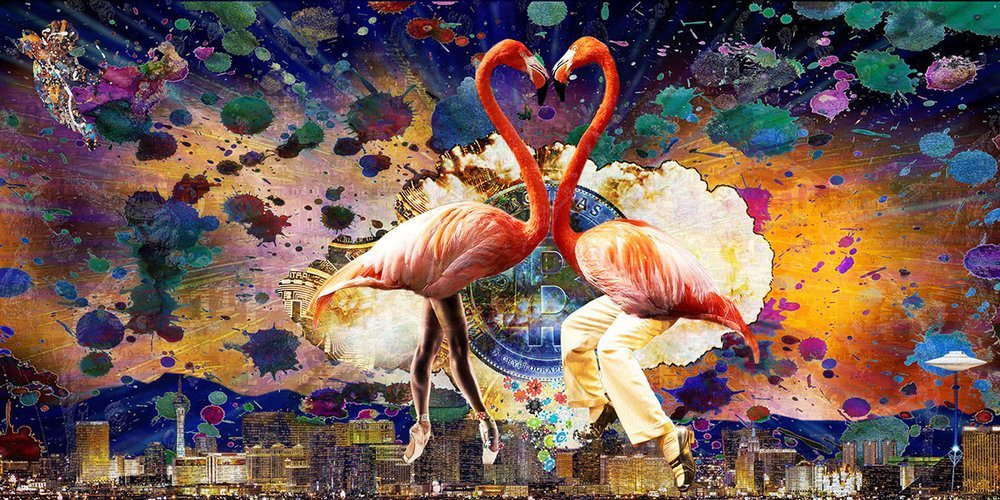 Watch the associated video through this link

The brand-new work “It Used To Be Wired” was made for Consensus 2018. The essential idea was to capture the crypto crossroads New York is currently facing. It also honors the tradition of the avant-garde in art there. This mixed-media canvas print with oils on top is now the most valuable one-off piece in my Art For Crypto portfolio at 3.9 BTC. When conceptualizing this piece I first thought about the lasting frontier spirit of New York, the artists who have lived there and pioneering moves in Bitcoin really starting from a humble transatlantic pizza transaction. No matter what you think about 9/11 a part of its ghost is inescapably linked to the 2008 financial meltdown and the birth of digital currency. Outside perhaps London, one struggles to think of a city more relevant to the global finances than the ‘City That Never Sleeps’. In truth, the inner city of London does not come to mind before Wall Street to most. How long will it keep that status though? It will be a balancing act. In this art piece the iconic island skyline is transformed by blockchain code but this time Philippe Petit is not walking in between the WTC buildings as the man on a wire. He is walking from the Freedom Tower to the digital unknown. There are many blockchain ventures there but many are moving out of NY and the United States due to a lack of entrepreneurial support. The question remains: “Will New York keep its pioneering spirit or drive out the future of finance?” The proceeds from “It Used To Be Wired” will all go towards producing two shows and an art exhibit at the World Crypto Con, the world’s largest crypto conference in Las Vegas. It includes a main stage performance, an opening ceremony show, and a 20 volume art piece exhibit during the three-day conference. It will feature here as well as on multiple crypto media with supporters well displayed from big screens and pull up banners to documentary features.

For a sake of a price reference, should you think this piece is pricey, remember that this #699606 Krypto Kitty here goes for a cool 0.8 BTC. The Wire to Vegas

Another art piece just released on my platform is “Beyond Moon” that is a full-on tribute to the coming conference and the impact crypto is having on the famous playground. The same goes for this piece that all proceeds go towards making the WCC shows a phenomenal experience.

The research of this piece took me to some very interesting places. Vegas is known as the default adult playground where you get to leave your responsibilities behind you. As we know from Pinocchio this is not, of course, the whole story even if the fun and glamour are real too. The whole place was born due to the Hoover dam having been built close to it to produce energy. The synergy with crypto was a joy to dig into as there was an abundance of material there. The Flamingo hotel is a big part of the birth story as well as falling in love so the central birds are a tribute to that. Nuclear weapons used to be tested about 40 miles off the strip for a long time so this time the explosion is crypto becoming a part of casino operations as well as funding for art performances and strip clubs.

The Elvis legs and my personal BTC support QR code on the ballet dancers point shoe is an encouragement to support the arts more than the strippers. The mother coin is raining all the main crypto logos in the form of chips on the epic code made skyline of Las Vegas. WCC, of course, has a special chip of its own as they are crafting a whole new paradigm in the world of creative conferences. Not everyone goes to Vegas to lose their minds but to work, make deals and perhaps secure multi-generational wealth. The name of the piece is a synergy between the Area 51 legends and the myth that U.F.O’s charge themselves off the pyramids in Giza. This time it is the Ether pyramid of the Luxor hotel that is charging crypto to go “Beyond Moon”. The text is written on the Star Trek font of course – for us nerds who might get off on such a thing. As a final note, almost a side note, we see Cupid shooting an arrow, perhaps through Bitcoin or the birds or both, through the heart of the operation. The symbol actually means an ego death as romance is there, for a large part, to produce children who shoot an arrow through your heart. It is about taking responsibility for life to carry on in the best possible manner. This is true for us individually as well as with our enterprises. Should you wish to support this venture with less than the full required minimum amount of 6 BTC here is how. I got approximately six months to produce something no one has ever seen before in the crypto space. Them dancing boys and girls don’t do this stuff for free. Producing a show is always a challenge but this time I’m doing it across an ocean too.

Cool if you can be part of making it a reality.