With the Dether Beta App, You Can Now Buy and Sell Crypto for Cash Locally, Anytime, With Your Phone! 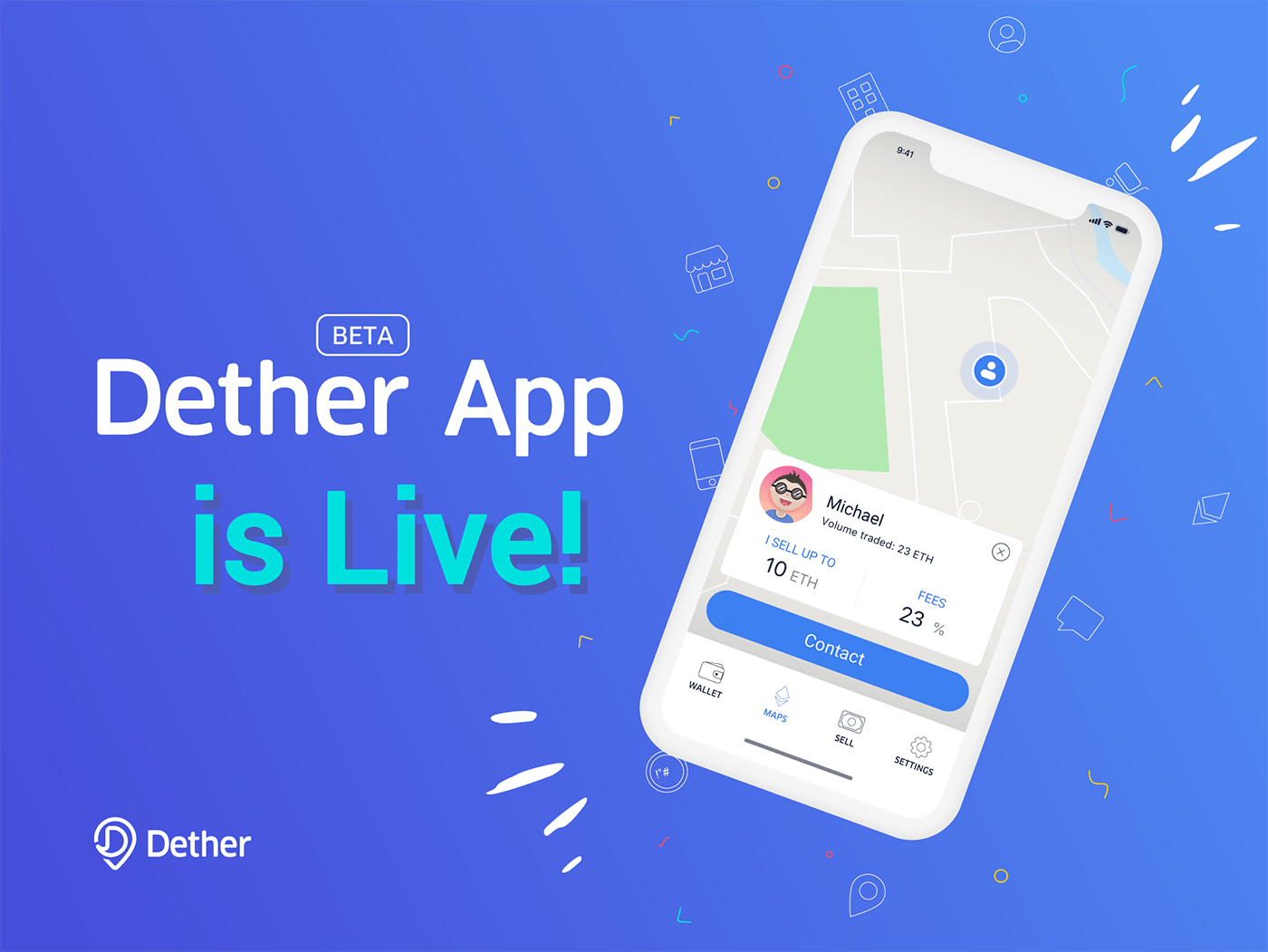 A mobile app that lets you cash-in and cash-out cryptocurrency, with no fees taken by the company

The Dether beta app is a peer-to-peer mobile application that allows you to connect and trade with crypto buyers and sellers near you on the Dether map.

As this is the beta version of the Dether app, you can currently buy and sell ether for cash, and exchange ether for a variety of ERC20 tokens, such as DAI, ETH, DTH, BNB, MKR, OMG, ZRX, AE, REP, HAV, and NUSD. You can also exchange those ERC20 tokens for ether. The next version of the app will have even more cryptocurrencies available to buy and sell. Users can currently trade up to the equivalent of 1,000 USD a day.

Dether is designed for everyone

Buying cryptocurrency presents many obstacles: fiat currency barriers, the need for a bank account, and certain geographical limitations. Individuals are often excluded from using cryptocurrency if their national currency is not accepted on a major exchange or if they don’t have a bank account or passport, leaving the world of dApps (decentralized applications) and the possibilities of blockchain technology inaccessible.

Dether (https://dether.io) addresses individuals interested in buying and selling cryptocurrency for fiat currency and finding shops where they can spend their cryptocurrency. Individuals can become an exchange by registering their point of sale on the Dether map.

The process is simple. In minutes, users can create an account, import or create a wallet, choose an avatar, and find users on the map looking to buy or sell cryptocurrency. Users can also discuss trade conditions through encrypted messaging prior to meeting.

In order to foster the development of the Dether ecosystem, the first 1,000 early access users who registered as a seller, received a free Dether seller’s license.

Setting Dether apart: a built-in wallet and exchange, plus decentralization and stablecoin integration with Dai

Decentralization is a key feature of Dether’s mission. During the peer-to-peer transaction process, no funds are held, and messages are fully encrypted. Because it’s a progressive web app, users aren’t inhibited by iOS or Android restrictions.

“We are building a decentralized, cash-in and cash-out marketplace, meaning that no central entity has any control over the user’s accounts, funds, or conversations. No funds are held. Each individual has their own private key located in their device. Conversations are peer-to-peer. The decentralized reputation system is based on the user’s number of trades and volumes. As a company, we don’t take any fees on the transactions between buyers and sellers.”

For users shying away from volatility, Dether and MakerDAO, creators of the Dai stable token, have partnered to bring the value and power of a stable token to retailers and individuals worldwide using Dether. By further breaking the barriers to blockchain and crypto adoption, they enable any individual or shop owner to easily switch from any cryptocurrency stabilized against the value of the U.S. Dollar, and vice versa.

Dether also functions as a wallet, and has its own exchange feature integrated, thanks to the AirSwap widget. This allows users to trade directly for DTH, without having to access a centralized exchange. Dether’s partnership with AirSwap will allow users to access other ERC20 tokens, acting as a bridge to other exciting blockchain projects.

Availability in over 120 countries

The Dether beta app is currently available in over 120 countries. It is currently in English, and will soon be released in Spanish, Portuguese, Russian, and Turkish, with more languages to follow.

“We are thrilled to be releasing the Dether app across countries in Africa, South America, and Asia. There are more than 2 billion adults that remain unbanked in these regions. Whether it’s for remittance, investment, or as a response to hyperinflation, we believe that these markets are in critical need of the ability to easily buy and sell cryptocurrency for cash.”

If you are interested in buying and selling crypto for cash, you can download the Dether Beta App here: https://app.dether.io