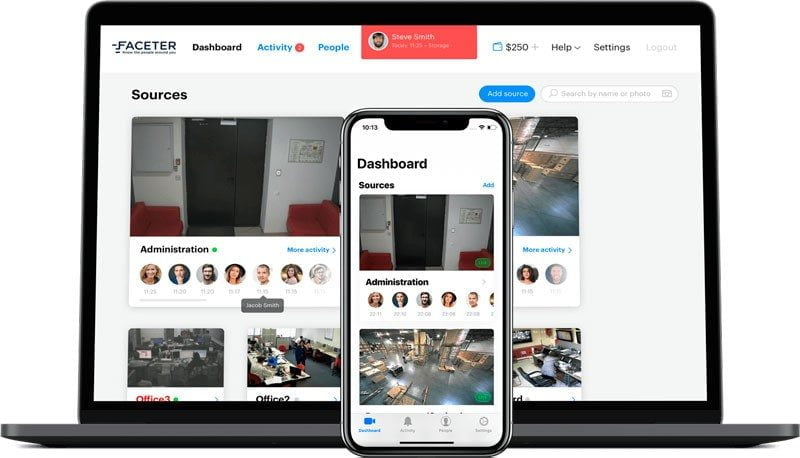 Faceter, a blockchain platform for video surveillance and video stream analysis, completed its ICO in March 2018. The project managed to reach the Hard Cap of $28 ml. thanks to the contributions of more than 80,000 investors. This is a great achievement for 2018 as the ICO market, on the whole, is experiencing a sort of recession and the only a small percentage of the projects reach the hard cap during Token Sales. This article discusses the business specifics and functions of Faceter and the problems that the platform is solving and development prospects of the video surveillance market in the near future.

To understand the importance and prospects of innovations in this market segment, it is enough to have a look at the recent numbers: the market potential is estimated to be $75 bln. while by 2019 there will be 841 mln. cameras installed across the globe.

Here are the major not yet solved problems that impede the development of the market for video surveillance solutions:

The result is that the modern video surveillance system is inefficient, works unilaterally and is unavailable to the general public.

Faceter is developing a brand new decentralized system of video surveillance and unique software for face recognition and video stream analysis. Moreover, Faceter also found the solution for processing and analyzing video data online by merging the advantages of mining and cloud computing.

In 2017 the company launched B2C alfa-version of its product, which has been successfully tested by several large companies from SAR Currently the developers of the project are working on the beta-version of SaaS-solution for the mass market. Faceter partnered with distributed computing platform SONM for research and development. The Companies will test the work of Faceter face recognition and intellectual analysis of video stream algorithms on SONM IaaS capacities.

The developers expect that the use of cloud computing will offer more than tenfold decrease of the computational infrastructure costs. Let us recall that these costs are a significant part of expenses for the implementation of complex machine vision algorithms. MVP – the product should be launched by the middle of 2018.

How does the ecosystem of the platform work?

The goal of Faceter is to develop a system that makes video surveillance smart by making it capable of “thinking” for more efficient recognition of faces, objects and online analysis of a video stream. At the mature stage of development, all these capabilities will be merged into a single one, namely, “understanding” of the situation and reacting to it. If implemented successfully, this will significantly enhance safety and reaction time if emergency actions are required.

The main functioning elements and capabilities of Faceter network:

Blockchain. Faceter uses the capabilities of smart contracts to provide flexible and transparent computational methods as well as the mechanisms of cloud computational network.

FACE Token. It is the settlements basis of the decentralized network used as a flexible, transparent, trans-border and closed settlement mechanism for all members.

Cloud computing. Using video cards miners will perform computing for recognition in the decentralized network with the opportunity to earn a higher income. The algorithm of this technology has been tested and approved by LFW and MegaFace, one of the most reliable industry experts.

Face recognition. Expands the capabilities of video surveillance systems to identify potential threats and other actions such as a smiling client or a concentrated employee etc.

Data protection. Faceter processes the source of the video signal in the safe environment while only non-personified data is transferred to the decentralized network.

As the video stream analysis requires enormous computational power, the platform developers are planning to create a decentralized network of “cloud” computations, significantly decreasing the price of the product, which will make it affordable for private consumers and business owners across the globe.

So the platform ecosystem successfully integrates the computational power of the miners, which should also positively affect the development of the project as it increases its importance for the community. Any GPU owner can join Faceter network and earn FACE tokens as rewards for contributing to the global safety.

Turnover of FACE tokens in the platform ecosystem

FACE token is a part of Faceter business model, it is the nucleus of the decentralized network used as the Proof of Recognition as well as a flexible, transparent and trans-border settlement mechanism for all members. It is a cryptocoin for payments made by clients. FACE token is also used to make payments to the members of FOG decentralized network.

In simplified form, the turnover of FACE tokens and funds in Faceter ecosystem is shown below: Also, a very important feature of the model is the fact that a part of FACE tokens will be burned by the developers, which facilitates the increase of the exchange value of the coin and motivated the holders to hold the asset, which is essential for the development of any cryptocurrency.

Development prospect and the use of video surveillance technology

Video surveillance can be useful not only to record crimes and maintain law and order (as nowadays) but also to estimate the crowd density at the stadiums and in the airports, monitor the efficiency of advertisement and showcases, analyze traffic jams, inform about accidents weather abnormalities, emergencies etc.

Moreover, “smart” cameras could independently evaluate situations potentially dangerous for a particular person and react to them. For example, if a camera noticed a theft or an attack attempt, it can call the police. In the event of health issues (i.e., loss of consciousness) it can call the emergency etc.

Naturally, intellectual video surveillance would be a perfect add-on for smart home systems. Imagine having an “invisible guard” at home that analyses the situation and can react to it.

Many experts mention that the potential of video surveillance cameras will not be fully implemented unless the cameras will provide for real bilateral interaction, instead of merely recording the reactions of people and maintain the records. Today the possibility of development of this technology is real and Faceter is doing exactly this.

ICO took place at Ethereum blockchain with the token standard ERC20, which provides for the fast integration of project tokens with the cryptocurrency exchanges to ensure the coin liquidity.

The detailed information about the structure of FACE tokens issue and the distribution of funds raised during the ICO is shown below: FACE token will be listed at several trading platforms and will become available for free trading in the nearest future.

Official resources of the platform

Please refer to the official website of the project https://tokensale.faceter.io and to the blog https://medium.com/faceter for the latest development news, new partnerships, and agreements.