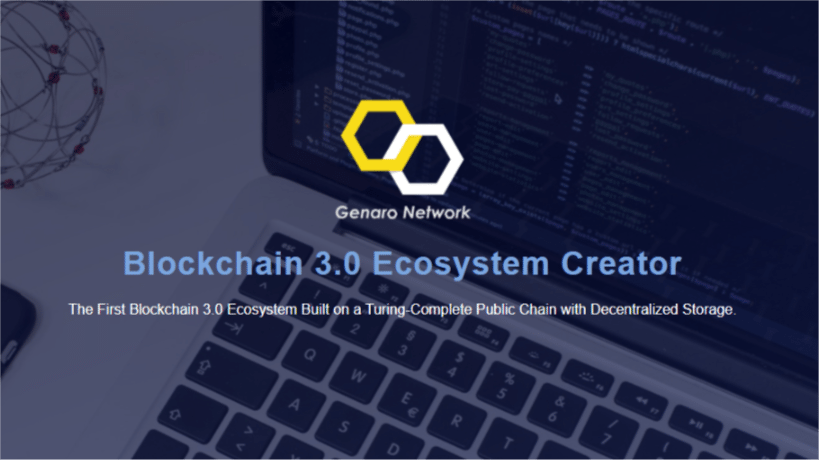 Genaro Network is the first of its kind blockchain project comprised of a Turing-complete public chain integrated with a decentralized storage network. The network runs on its own public blockchain to create an entire ecosystem on which decentralized applications (known as DAPPS)can be built. The platform offers a great deal of flexibility by allowing the deployment of smart contracts while providing a permanent and private method of storing their data, videos, documents and other file types. It is also highly secure compared to other conventional systems and can be used by other blockchain solution providers as a replacement for cloud-based storage.

The Genaro ecosystem is designed to provide a range of advantages for Internet of Things and Big Data implementations along with both added transparency of records and privacy of data for DAPPs and their users. The data is securely stored on the Genaro Network, and it can only be decrypted by using the private key belonging to the file owner.

The Genaro team has proposed to build a network on which many applications can be developed, which is the opposite approach the existing cloud network infrastructure today, which is a combination of different applications.

Technically speaking, by creating a hybrid of SPoR (Sentinel Proof of Retrievability) and PoS (Proof of Stake), the platform aims to offer a highly scalable and efficient solution that can overcome the shortcomings of the existing distributed storage and sharing solutions. A combination of smart contracts and decentralized storage makes use of unused storage space and processing power contributed by the network participants. Genaro thereby eliminates the need for high-end data centers with centralized storage, which are more prone to security breaches, not to mention the need for additional resources to set up such a system. It also ensures the almost fool-proof protection of intellectual property.

At the same time, Genaro believes in adding value to society, which it upholds by giving back to the community. This combination paves the way for Genaro to set the foundation for the future of cryptocurrency technology and its implementation – Blockchain 3.0. In doing so, the project puts the power of controlling and managing the data back into the hands of its owners rather than large media and advertising networks, for example.

The creators of Genaro believe in community development. Apart from building the first Turing-complete public chain with a decentralized storage network, they are actively involved in supporting the tech community by introducing them to the benefits of a Blockchain 3.0 paradigm.

As a part of its community initiatives, Genaro has set up its Genaro Hub and Accelerator to foster innovation in the development of decentralized applications. The real-world services offered by the Genaro Network are available for everyone irrespective of whether they belong to the Genaro community and they can even be utilized with the platform’s GNX tokens.

The Genaro Hub is designed to provide users with a range of services including food, lodging, and drinks alongside the blockchain network infrastructure, offering an ideal environment for interaction with community members. Genaro encourages a Silicon Valley-style co-living, co-creating, and co-working culture. Unlike the Genaro Network itself, which is a non-profit foundation based in Singapore, the Genaro Hub and Accelerator is set up as a social enterprise model, doing business while doing good for the ecosystem.

In addition to providing a data storage platform for DAPPs, individual users will also be able to access the Genaro Network through their personal computers or smartphones. It provides stored data and files to the users at whatever location they are in as long as they have access to a smart device. The network also allows users to share their data with others.

The GNX tokens can also be used for sharing and buying storage space on the network. The transactions on the platform are managed by smart contracts, ensuring efficiency and complete automation of the system. The platform expects its community initiative to give rise to thousands of DAPPs, and a number of other blockchain projects making use of Genaro’s infrastructure, to provide many new services to their users.

The unique community-driven initiative is the brainchild of a team of social innovators and tech entrepreneurs with experience working for companies located in Shanghai and Silicon Valley.

Genaro Network has all the hallmarks of becoming the future’s best-decentralized app development and storage platform with high reliability.  More information about the platform can be found at the platform’s official website.