indaHash Coin Is Taking The Influencer Market By Storm

indaHash, the award-winning app which connects over 300,000 influencers from 70 markets with globally recognizable brands has introduced the indaHash Coin.

To tokenize the influencer industry in order to solve major issues between brands’ influencers and their audiences. Their crypto-economics implies circulation of the indaHash Coin among said groups and creates a new and more valuable type of relationship between each part of the ecosystem.

Those are the basics, but this is about much more than just linking influencers to brands. This new crypto-payment system will give influencers the ability to create their own cryptocurrencies and use personalized tokens to reward their audiences, who can then exchange them for unique interactions and/or physical goods from influencers. This will create a completely new type of relationship between social media celebrities and their fan base, bringing their audience to a level of engagement that is yet unheard of in the world of social media marketing.

Below is a video breaking down the process by indaHash CEO Barbara Soltysinska:

“Thanks to it’s well thought out crypto economics, indaHash Coin will become the world-standard currency for settling all influencer activities reflecting the value of the growing market. With the introduction of the indaHash Coin we want to tokenize the influencer marketing world and solve a wide range of issues and challenges between influencers, brands and fan bases.”

The indaHash tokens will increase the impact of influencers by developing their power well beyond their numerical reach on social media. If a follower shares, subscribes or comments on a post, the influencer can issue rewarding tokens under their own name to said followers. Followers will have the ability to then exchange the coins for various rewards, as previously mentioned, and also participate in rankings and special events organized by influencers. Tokenization will play a huge role in the rollout of indaHash Coin, giving influencers and followers an unheard of level of engagement. As if that wasn’t enough, the company has also created a feature and coined the phrase, “PAY-WITH-FAME” which will change the way global, as well as smaller, brands cooperate with influencers by offering discounted products and services. This will, in turn, increase the chance for said companies to get reviews and have more posts made from even more desired influencers.

With that being said. It’s easy to say that business is predicted to boom even more than it has in previous years for indaHash. 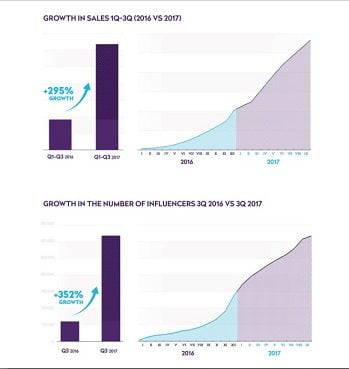 indaHash has also released a  Whitepaper with numerous illustrations (including the one above) and information covering their business model, timelines regarding the implementation and distribution of the indaHash ICO, and a detailed layout of all the ins & outs of the indaHash Coin.

Featured on CNBC and other media outlets, word of the pre-ICO release is already turning heads. The pre-ICO will begin on November 08, 2017, giving participants a chance to enjoy a bonus for early adoption. 80% (320 million IDH) of all coins (400 million IDH) will be available during the pre-ICO and the ICO. A cap of 400 000 000 indaHash Coins will be created and, depending on the time of registration, the price will vary from 4480IDH to 3200IDH for 1 ETH with a hard cap, depending on bonuses and ETH value, from $22,100,000 – $31,000,000. The main ICO will begin on November 29th, and indaHash has stated that it has envisioned the possibility of trading with tokens after finishing the process of the ICO on various trading platforms.

Big Bitcoin Investors – Who They Are: In Tesla’s Footsteps