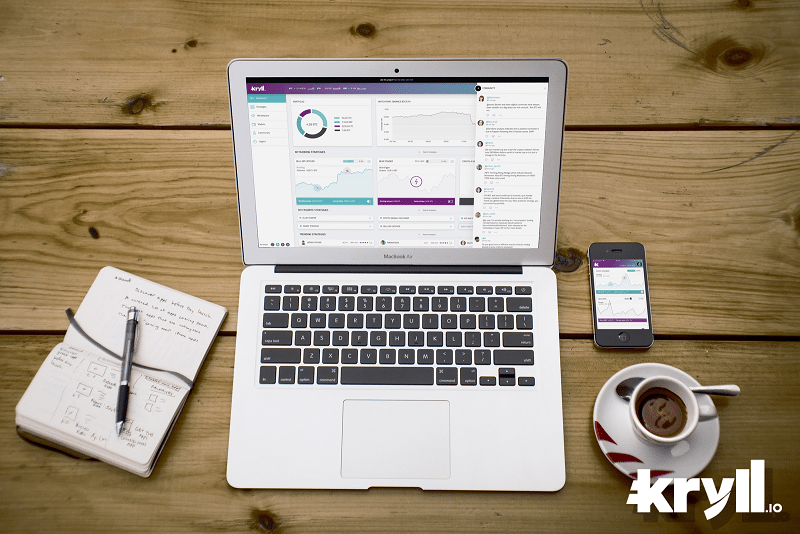 The rapid rise of cryptocurrency’s popularity left many people with the feeling that they’ve missed an opportunity to invest. This feeling hit harder when Bitcoin reached an all-time high of $20,000 at the end of last year and was projected to go up to $40,000 in 2018 and to jump up to $100,000 in 2021.

However, reality has only proved the opposite as the price of Bitcoin plunged to less than $6,000 in February stabilizing at about $9,000 a few days later. In just under a month the total market capitalization of cryptocurrencies lost almost more than half a trillion dollars of value. Not surprisingly, Citi Private Bank report described cryptocurrencies as “the most volatile asset class”.

The volatility and the unpredictability of cryptocurrencies make it hard for a beginner investor to enter the game. Checking up on tokens price every five minutes is not that someone really wants to do on a daily basis. A French startup presents Kryll.io to make it less stressful and sophisticated offering user-friendly automated trading tools.

CREATE YOUR OWN STRATEGY

Kryll gives its users an opportunity to build their own automated crypto strategies with different LEGO-like blocks such as IF, ELSE, AND etc. For example, if the market falls by 20%, an investor may set a scenario to swap bitcoins for dollars as soon as possible. Or they may wish to buy more when the market collapses. A user can simply drag and drop blocks to create a strategy that fits their investment goals.

As the company develops they want to produce more complex blocks based on machine learning and sentiment analysis. Luca Benevolo, Kryll’s CEO, says the idea is “to analyze in real time the feeling of a token and crypto in the broad sense on social networks and to be able to extract alerts”. Therefore if the algorithm detects a community goes FUD (the fear, uncertainty, and doubt) on a cryptocurrency on social media it sends alerts with “bad feelings” to a user.

“Kryll wants to create a strategy constructor, a sort of WordPress or Tilda for traders. The project offers a comprehensive multi-platform solution, and that may be its main advantage. Desktop computers, mobile phones, and websites, combined with a flow of signals and news and integrated into a user-friendly interface – it’s easy and can be used anywhere,” – says Denis Suslov, Chief Financial Officer at Finom AG.

But one doesn’t have to create their own script from scratch. They can join a strategy created by an experienced trader for a fee in KRL (tokens gained via the ICO). The price is set up by the creator of the strategy.

DON’T RUN THE SCRIPT UNTIL IT WORKS

Once a strategy is built, the first question often is whether the strategy actually works. The company hedges users’ risks allowing them to test their scenarios for free as long as needed. They will be able to try it out using the 6 months of recorded data of market changes. Or they can choose the sandboxing option as if the script were actually running on the market.

While strategy creation and real-time simulations are free, the platform will only charge users for live trading. The project won’t take commissions on profits – their business model is based on a pay-per-use mechanism. According to its whitepaper, Kryll will use a “fuel” system. The launch of a strategy will use KRL tokens as a running fuel. The price depends on the complexity of a task: the more complicated is the script – the more it costs.

During the ICO a KRL token is being sold for $0.20. The minimum purchase is 500 KRL. Last December Cryptense S.A.S, the Blockchain company that runs the Kryll project, has already received €200,000 from private investors before the token sale. Now their goal is to raise up to $29 million via the ICO that started on February 7, 2018, and will run until March 20, 2018. The ICO appears to be going well – in less than in a week Kryll have already sold tokens for more than $1.5 million USD.