A Blockchain Platform that will Confront the Problems of Gaming 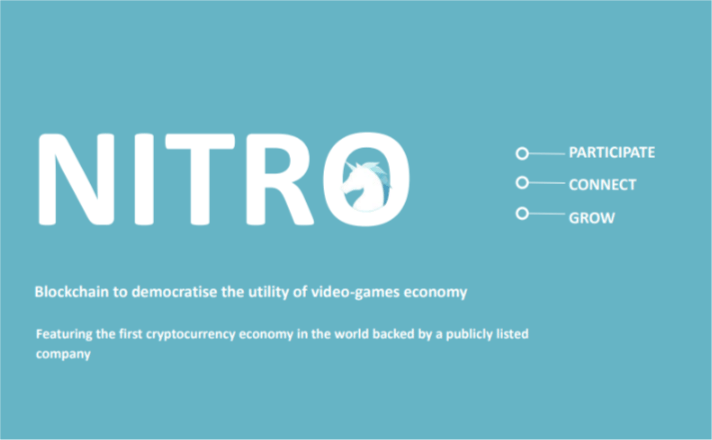 When confronted with just a 50-50 chance of getting it right or wrong in an ecosystem that is filled with so many options, it is natural for an investor’s instinct to pick a more established and balanced venture with a track record ahead of an ordinary startup whose ideas are yet to be thoroughly tested in real life.

Already backed by a publicly listed company (iCandy Interactive Ltd, ASX: ICI) that has an existing relevant business with prominent institutional shareholders. The Nitro project will tokenize the video games economy that is backed by a successful award-winning game business that has been operating for many years. Having recently acquired a game portfolio with 325 million users, the platform now boasts of 348 million users. This gives Nitro the chance to become most widespread cryptocurrency in the world, a proposition that provides a safety net against the risk of business plan execution, compared to other ICO projects have.

Simply defined, Nitro is an independent, blockchain-based online collaboration platform, which seeks to allow participation in the video-games economy, to connect various stakeholders, and to achieve growth for the overall Nitro network.

The game industry is confronted with a lot of complex challenges. Some of these challenges involve the sidelining of some supposed key players in the industry, leaving them to be ordinary stakeholders without the appropriate compensation for their inputs. This happens when the bigger financially buoyant members of the gaming community organize a dominating structure which makes it harder for smaller players to meet up with certain standards, so their rewards are determined by the few ‘whales’ in the form of game studios and institutional marketers.

A holistic approach towards a complex system

With Nitro’s thorough understanding of these situation and other complex challenges of the gaming industry, the company is building a blockchain based solution that will via a holistic approach solve end-to-end value-chain problems of the ecosystem. This approach puts into proper perspective the interests of all stakeholders of the video-game industry, i.e. gamers, game studios, publishers, and financiers.

These solutions are expected to be achieved by using the Nitro blockchain’s native token called NOX. Holders of this token will be able to participate in the economy of the video-games industry. Nitro will fund games voted in by NOX holders on the platform. Promising Game Studios will have access to much-needed funding and will be able to connect with gamers earlier on in the development cycle. This will greatly improve the quality and variety of games produced.

On the side of the gamers, they will be able to use the token as in-game currency to purchase games or in-game items. Gamers may also be eligible for incentives, in the form of NOX tokens given out by game studios, for performing actions such as trying out new games, participating in game tournaments etc.

Confidence in a booming marketplace

The gaming industry is currently booming but a lot of key players are locked out of the profiteering system. This is one of the key problems that the Nitro project is out to solve. With the Nitro project, publishers and game studios will get marketing access to the audience of gamers through an efficient and transparent manner. Gamers at this point will also be able to use one coin in all games for in-game purchases, get an incentive in engagement, participate in the game development process and ultimately get rewards from the industry as token holders. Game studios, on the other hand, will gain access to the funding and audience to trial ideas plus they will get instant revenue (instead of waiting for payment cycles that can go up to 90 days).

As it has already been mentioned above, the Nitro project offers significant confidence to adopters based on the existing backdrops from which it emanates. The project is backed by 3 established VC funds from Singapore (Fatfish Internet Fujd, Incubatefund and BB fund (blockchain fund by Life.Sreda)). iCandy’s shareholders also include industry giant such as Baidu e.g. Baidu (USD60 billion marketcap Chinese Internet company) and the Chinese Global Mobile Developer Confederation (GMGC), one of the most influential games developer network of China. The  Nitro economy is conceived and built by those with very successful business track records in the tech industry. These track records will translate into know-how that is invaluable in building a sustainable economic model that will benefit token-holders.

Part of the market advantage of Nitro tokens is that it immediately becomes applicable to Nitro funded games and other third-party games. Participants in these scenarios can use the Nitro Marketplace and its API to transact with gamers. Meanwhile, iCandy as the publisher will market Nitro-funded games to its existing international community of more than 348 million smartphone users.