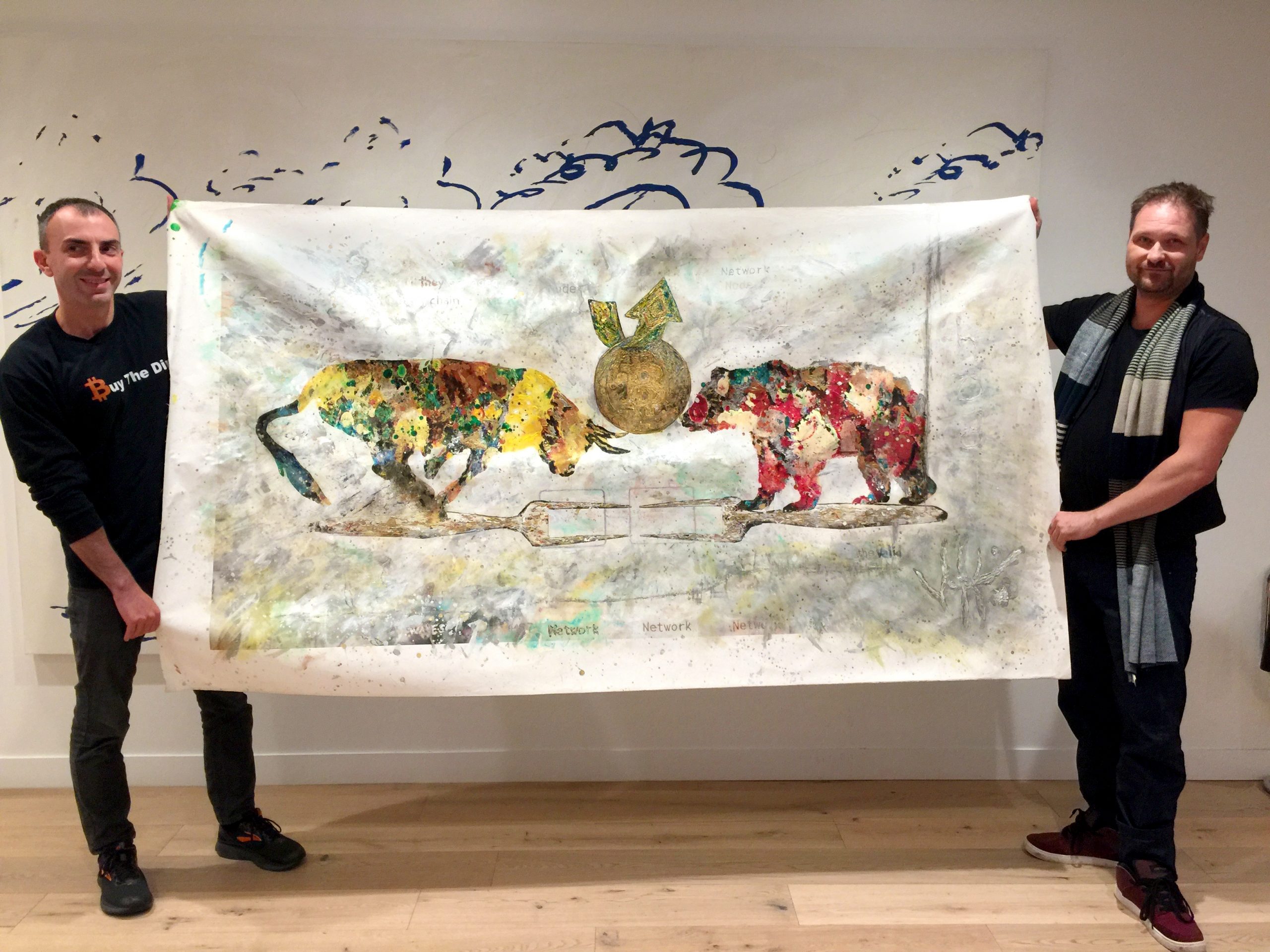 There are only 99 individual pieces made out of 33 works, baby!

Since coming into this space, starting Art For Crypto in June 2017, I’ve produced 33 works that tell the tale of crypto from many angles. They also utilize tech and certificates, as appropriate. As my works are digital originals due to the process I invented back in 2008, the most popular investment grade work has been something called a ‘re-paint. “Stereoscopic” partly made live in front of the Crypto Kingdom documentary (time 23.15) crew, hanging on the wall of Adam Williams, the co-founder of World Crypto Con in Las Vegas. He has 5 of my large works in his collection. “Compliance is the New Black” was purchased for 1 BTC by Niko De Jonghe from Blockchain Valley from Las Vegas.

What that means is that I paint, and photograph those paintings as layers, sometimes bodypaint recording the process, nature photography, etc. Those files then get printed into high-quality canvas and are then re-painted over with acrylic paint to make them unique with only three versions produced of each piece. Since I’ve now put a hard cap on the early works made between 2017-2021, only 99 will ever exist. Here is an article on this platform, which was the first ever to be written about my work. There are still some available as the 1/3, like the headlining piece here called “I Am Satoshi Nakamoto”. Soon, the more the market saturates from the thousands above thousands of artists pouring in, the early works will start to stand out as the beginner works of an important art movement.

“Vesa’s art is amongst the most integrally advanced in the history of Western abstraction – no small claim, but one backed up by the works themselves. Rather than abstraction as a fleeing from life, his works are a diving into the incarnate mystery of human being — direct celebrations of the fullness of Life.”

Already back in 2014, Professor Michael Schwartz put me in the 100MM plus category in substance and delivery. This means Picasso, Dali, Rothko, Pollock, Kahlo, and the usual suspects of every major museum and auction when real money moves. Here is proof of quote.

I also implemented a new pricing system called stable art, as the price of these pieces is steadily tied to the foundation of 1 BTC each. To some, the ‘steady’ part will come across weird to begin with but think about it. Fiat value is going steadily down. BTC value is going steadily up. There actually might come a moment, in the not too distant future, that people will refuse to convert their BTC into fiat anymore. For this, you might need something even more scarce, and higher upward trajectory – early Bitcoin art. 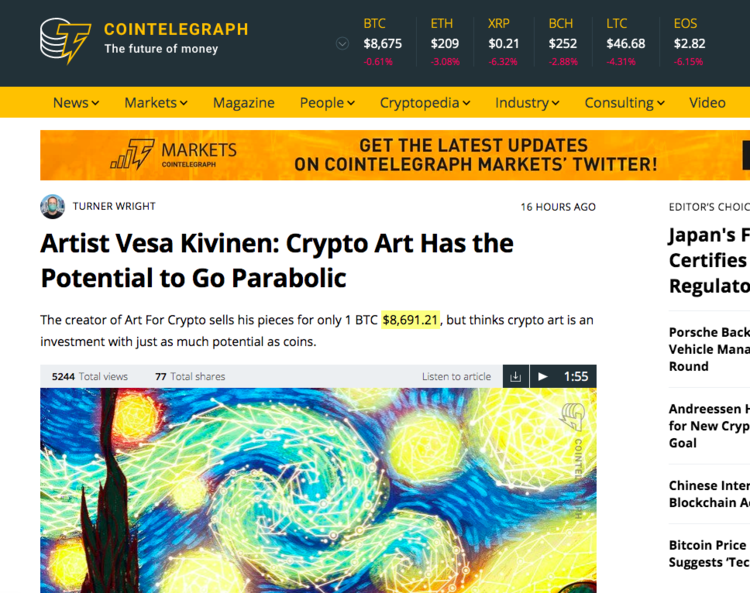 Like this 3rd version of the Forbes headlining article on the movement owned by famous OG trader Tone Vays, you can only get it on the secondary market, and Tone is unlikely to part from it for less than 1 BTC, no matter what its fiat value is. That’s if he ever will. The Tone Vays commission “Selling Banks Their Fat Asses Back” that followed the Fork & Flip collecting, is also sold out as an edition of three. This one was collected from a public auction during Unconfiscatable in 2020 by Willy Woo. Three works have now sold out. This is Fork And Flip, Beyond Moon, and Selling Banks Their Fat Asses Back. For example, INVISIBILITY, made for the Litecoin Foundation, commissioned direct by Charlie Lee, only has one version left. It is priced at 2 BTC, as some of them increase the price towards the end. Charlie Lee in Las Vegas 2018 stood next to “Truth Or Dare“, about crypto adoption in India. It still has 2/3 and 3/3 versions available. Only one of the INVISIBILITY pieces remain for 2 BTC, as some increase towards the end.

These works are available via both crypto and fiat. The next show will be in AIBC Dubai in May.

V E S A
Crypto Artist
All links to physical, NFTs, and more below
http://linktr.ee/ArtByVesa