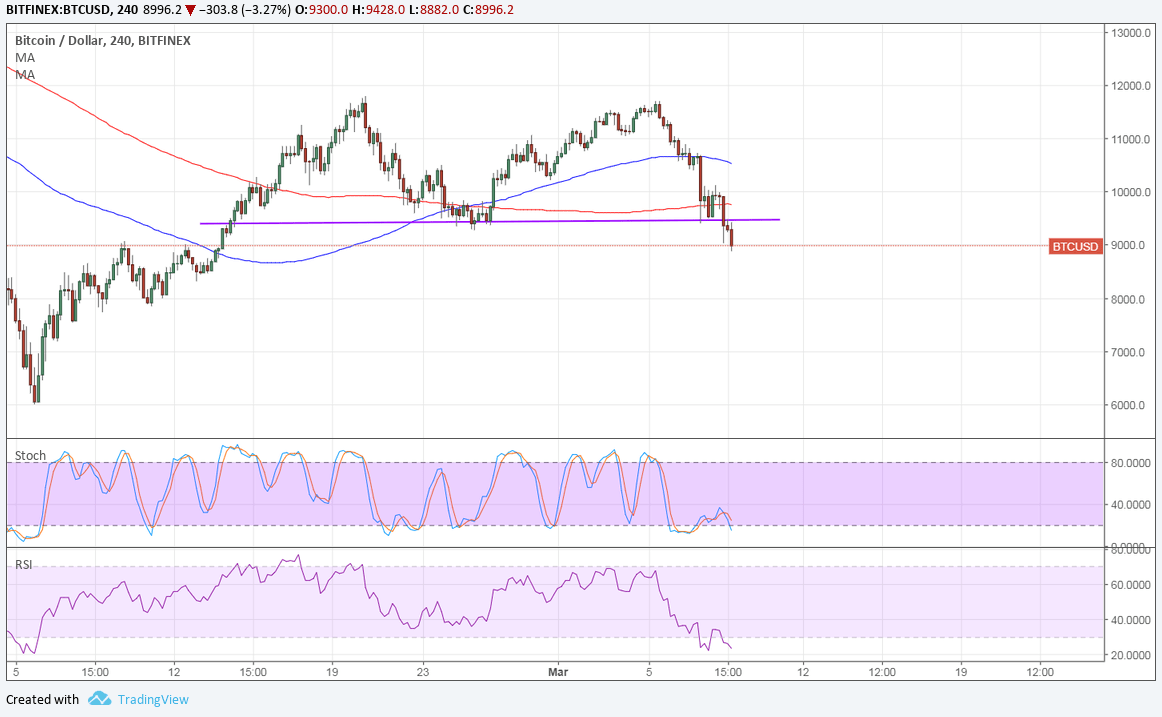 Bitcoin price confirmed the double top reversal signal, which suggests that further losses are in the cards.

The 100 SMA is above the longer-term 200 SMA so the path of least resistance might still be to the upside. This suggests that the rally is more likely to resume than to reverse.

However, the break below the 200 SMA and neckline support suggests that bitcoin price could fall by around $2,000 or the same height as the double top reversal pattern. The gap between the moving averages also appears to be narrowing to indicate a possible crossover.

Stochastic is indicating oversold conditions and looks ready to turn higher to signal a return in buying pressure. RSI is also in the oversold region, signaling that sellers are getting exhausted. Dollar demand strengthened in recent trading after Trump watered down his tough rhetoric in his tariffs plan. He said that Mexico and Canada could be exempted from these while NAFTA talks are still ongoing while other allies could also enjoy special arrangements.

This led to risk rallies in higher-yielding assets like stocks and commodities, but bitcoin price failed to benefit from this. By the looks of it, cryptocurrencies are back to taking advantage of risk-off action rather than joining riskier assets in rallies.

Besides, news that the SEC could ramp up its oversight of exchanges has also weighed on price. In Japan, the Financial Services Agency suspended operations at two relatively small exchanges, Bit Station and FSHO, for one month. According to the regulator, a manager at Bit Station used customers’ bitcoins for personal purposes.

Apart from that, there were also reports of compromised accounts on a major Hong Kong-based exchange, reviving jitters in the industry.