Because of Trump’s pressure on the Federal Reserve, the central bank could end up cutting interest rates. According to Pompliano, such a lax monetary policy could see capital flow to Bitcoin. In turn that will lift prices toward $100,000 by 2021.

There is a direct correlation between Bitcoin price expansion and global economic turmoil. A slip in the latter causes a sporadic rise in the other, and there is evidence.

With different jurisdictions applying different monetary policies fitting for the stability of their economy and fiat currencies, President Trump is concerned about the US position when it comes to protecting the greenback.

While the USD is a reserve currency influenced mostly by supply-demand forces, he claims otherwise for the Euro and the Chinese Yuan.

In a tweet, he calls for the US to “match the currency manipulation game”:

“China and Europe playing big currency manipulation game and pumping money into their system in order to compete with the USA. We should MATCH, or continue being the dummies who sit back and politely watch as other countries continue to play their games – as they have for many years.”

No doubt, should there be punitive tariffs imposed on the EU while the Federal Reserve slash fund rates, Bitcoin stands to gain as a safe haven. If anything, that would be the perfect primer for a bullish run that could see the asset blast to $100,000 by 2021 as per Pompliano projection: 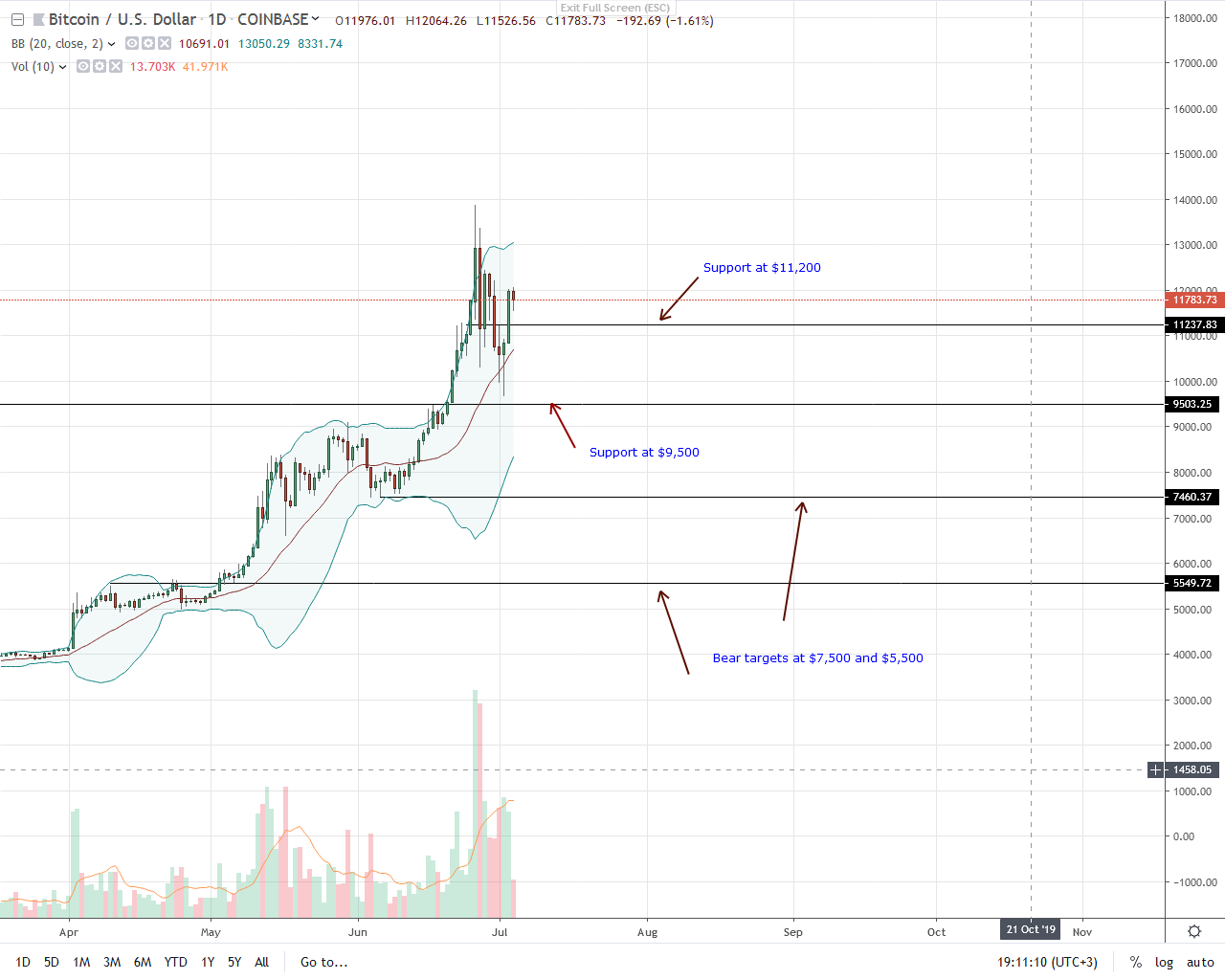 At the time of writing, BTC is down 9.2 percent from last week’s close. However, gains in the past 24 hours are modest to say the least. Building on the double bar bull reversal pattern from the middle Bollinger Band (BB), bulls have a chance.

Although a conservative approach will be to initiate long positions once prices rally above $14,000, aggressive traders can buy the dips. All this is thanks to yesterday’s upswing confirming bulls of July 1st and 2nd.

Unless otherwise there is a counter candlestick wiping out gains of July 3, buyers are in pole position to build on April through to June momentum.

Even if June 27 candlestick is visible, June 26 bull bar leads this trade plan. Any form of price volatility forcing BTC prices above $14,000 and June 26 high must be with high trade volumes exceeding 82k. Similarly, a counter candlestick wiping out gains of July 3 as BTC crumble below $9,500 must ideally be with high participation.