Even with sellers threatening to reverse gains, TRX is stable above a critical support level as it trades within a bullish breakout pattern. With BTT rising demand and astronomical volumes, TRX will be the main benefactor.

BTT is finally retracing allowing more investors as well as believers to “catch” the token at a discount. While the ride may just be starting, it is the right time for traders to get off the bull ride and re-load. That means fine-tuning entries in lower time frames and preparing for the next leg up, a reminiscent of the now distant glory of late 2017.

It will also be another opportunity to pile up profits despite BTT ballooning 1,000 percent a few days after launch. These price swings show how shrewd and ingenious the Tron Foundation and Justin Sun were when they sunk in $120 million, gambling with a law-breaking protocol.

Early—but limited adopters–are now reaping benefits. Besides, there is a contagion effect, and TRX–whose owners will receive airdrops in the next six years, will undoubtedly receive a boost as BTT demand increase. 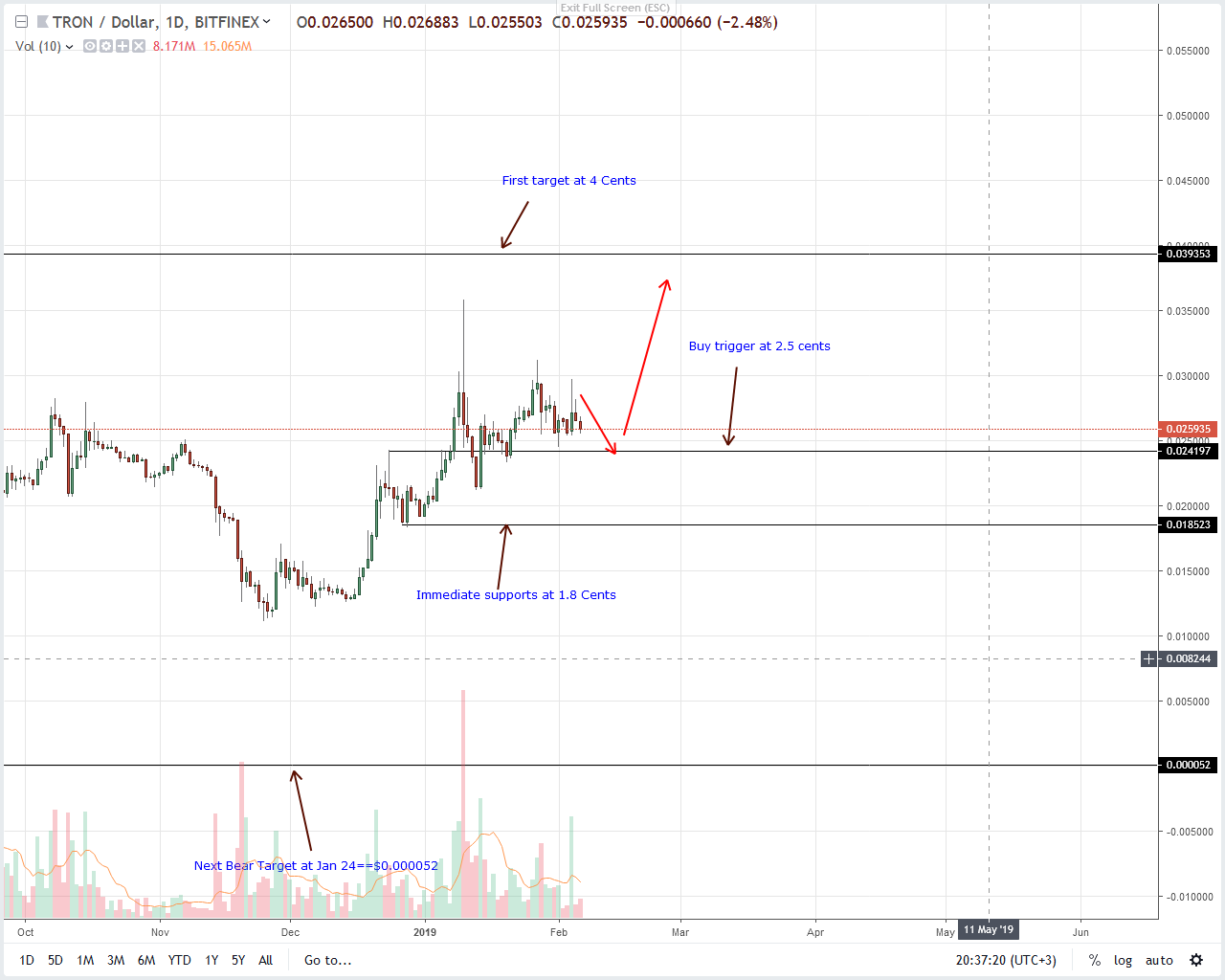 Currently, TRX is changing hands at around 26 cents, but prices are all over. Because of BTT bull injection, we expect TRX to expand. However, prices remain steady above 2.5 cents and trending below pre-ICO rates.

All the same, our medium-term trajectory has been set, and as long as bulls maintain TRX prices above 2.5 cents, every low should be a buying opportunity for risk-off traders aiming at 4 cents. If not, and TRX prices slide as dropping BTC prices weigh negatively on BTC, then traders ought to exit their longs once bears breach 2.3 cents–the lows of the double bar bull reversal pattern of Jan 20-21.

Before then, risk-averse traders should set up their trades as laid out before. Triggers remain at 3.1 cents or Jan 27 highs, and upon activation, targets will be modest at 4 cents and later 6 cents.

Volumes are thin but rising. As expected, participation levels dropped at Feb 4 upswings—42 million versus 17 million. All we need is a confirmation of this bull bar with heavy sell pressure—notice the long upper wick. Lifting prices above 3 cents confirming Feb 4 bulls should be high volumes exceeding recent averages of around 15 million and 42 million of Feb 4. Those will be the hallmark of bulls hinting of resumption.

Tags: bittorrentBTTJustin SunTRONTRX
TweetShare13
BitStarz Player Lands $2,459,124 Record Win! Could you be next big winner? Win up to $1,000,000 in One Spin at CryptoSlots