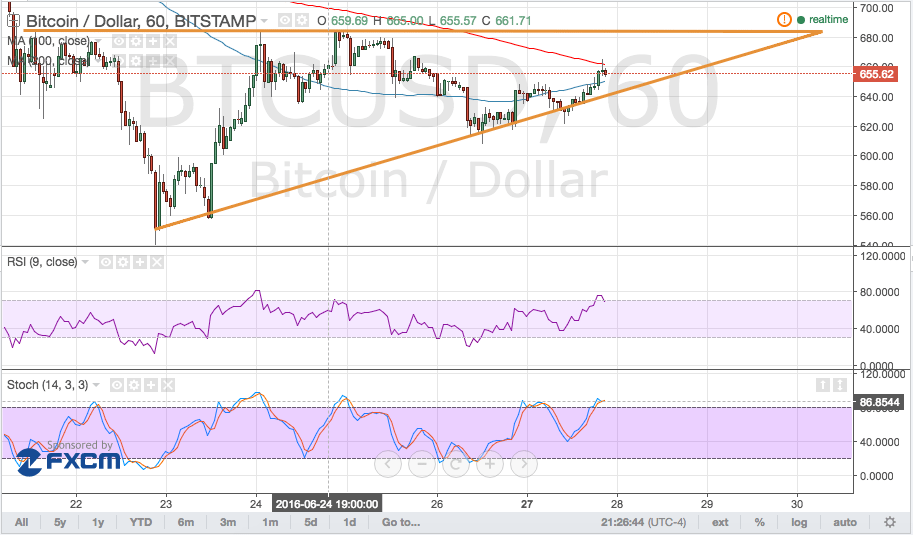 Bitcoin price is consolidating in an ascending triangle pattern while market participants wait for more catalysts.

The 100 SMA is below the 200 SMA so the path of least resistance is to the downside. However, the gap between the two moving averages is narrowing and an upward crossover seems imminent, possibly indicating that buyers are regaining control. Bitcoin price is finding resistance at the 200 SMA, which usually holds as a dynamic inflection point.

RSI is already indicating overbought conditions and is starting to turn lower, indicating that bearish pressure might return. Stochastic is still on the move up but is also near the overbought area, which means that buyers are getting exhausted and may let sellers take over.

If so, a break below the triangle support around $620 could take place and force bitcoin price to fall. The next potential support is located at the $580 level, at which several orders might be located.

Now that the main market event (EU referendum) has passed, traders are starting to book profits off their earlier bitcoin positions. In addition, market watchers are waiting for the next big catalyst before adding to their trades. So far, there is still a lot of uncertainty in the markets as UK officials and EU leaders haven’t started negotiations.

Risk aversion is still present and this might be good for bitcoin price, especially since central bankers might be considering additional stimulus or intervening in the currency markets. This could drive investors away from currencies and equities, leading them towards alternative assets like bitcoin.

The economic calendar is showing a quiet week so consolidation for the next few days could be seen unless a major announcement is made. Event risks include speeches from central bank officials such as Draghi and Yellen, along with the EU Summit set to start later today.

Tags: bitcoinbitcoin pricebitcoin signalsbitcoin tradingbtcusd price
TweetShare
BitStarz Player Lands $2,459,124 Record Win! Could you be next big winner? Win up to $1,000,000 in One Spin at CryptoSlots