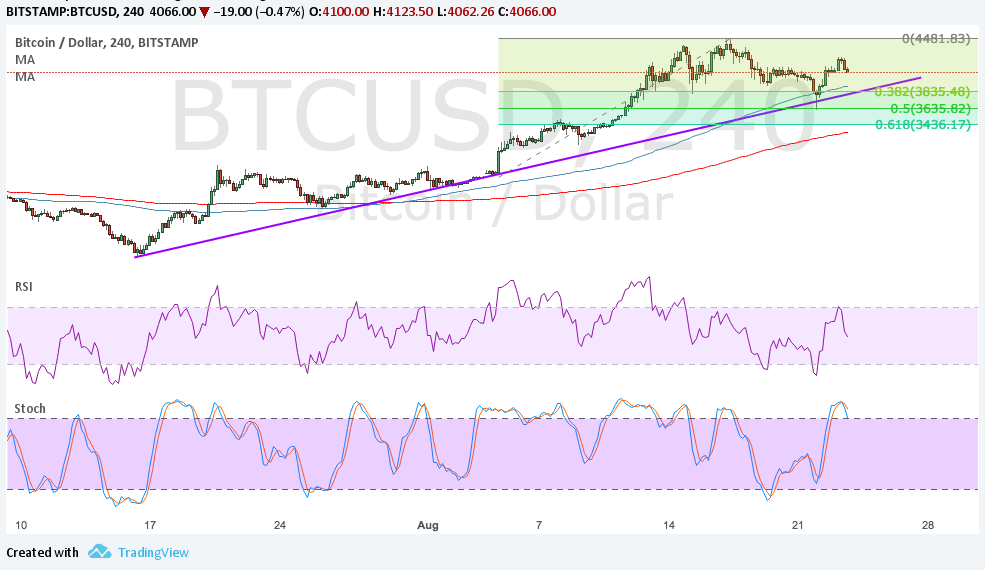 Bitcoin price is still moving above its ascending trend line that has held since mid-July but there are signs that the uptrend is weakening.

The 100 SMA is above the longer-term 200 SMA so the path of least resistance is to the upside, which means that the rally is more likely to continue than to reverse. The gap between the moving averages is widening to reflect stronger bullish momentum, possibly taking bitcoin price up to the swing high around $4480.

However, stochastic is turning down from the overbought level to signal that buyers are taking a break and letting sellers take over. RSI is also heading south so bitcoin price might follow suit. A larger correction from the climb could still find support at the 61.8% Fibonacci retracement level closer to the 200 SMA dynamic support.

The presence of geopolitical risks continues to keep bitcoin price supported against other assets like stocks and commodities, but the rising mining power for bitcoin cash threatens to keep hard fork issues in play.

There are also reports showing that miners are swapping networks as bitcoin cash has been generating new blocks at 1-2 minutes faster than the original core version. Investors are keeping close tabs on when bitcoin hits the next block on August 24.

Meanwhile, the dollar is losing ground on persistent threats from North Korea and infighting in Washington. Trump has also threatened to impose a government shutdown if he doesn’t get the funds to build the wall along the Mexican border. This comes after the political fallout from his handling of the Charlottesville violence, casting more doubts on the administration’s ability to follow through on its fiscal reform plans.