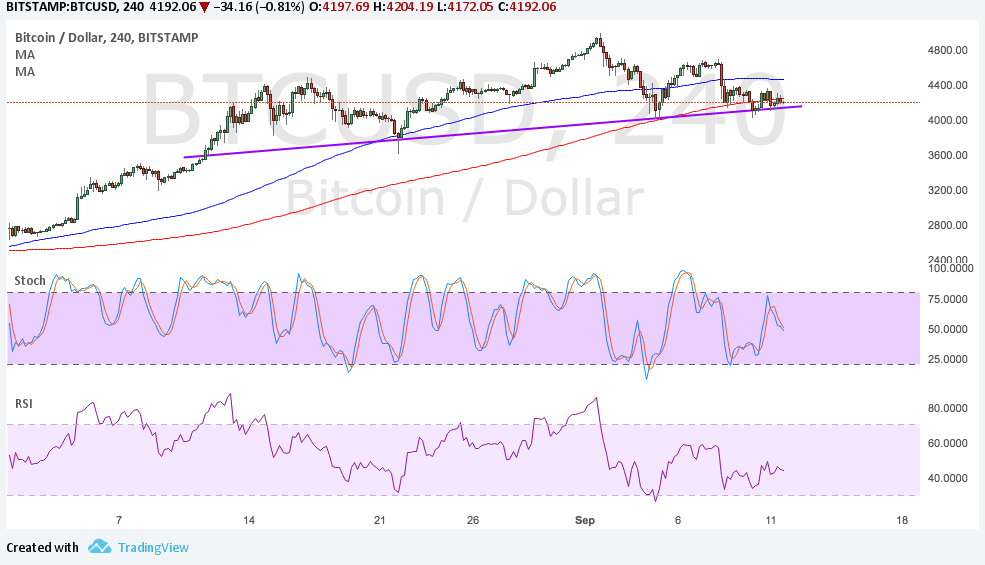 Bitcoin price could be due for a big selloff if it breaks below the head and shoulders neckline around $4200.

The 100 SMA is above the longer-term 200 SMA so the path of least resistance is still to the upside. However, the gap between the moving averages is narrowing to reflect weakening bullish momentum.

If a downward crossover materializes, selling pressure could increase and spur further losses. For now, the 200 SMA is holding as dynamic support since it lines up closely with the head and shoulders neckline.

Stochastic is pointing down without even reaching overbought conditions to indicate that bears are trying to get back in the game. RSI, on the other hand, appears to be turning higher to show that bulls are still putting up a fight. If they emerge stronger, bitcoin price could have a shot at creating new record highs.

There has been a considerable improvement in risk sentiment since the start of this trading week as there have been no new missile tests in North Korea and Hurricane Irma has weakened into a Category 2 storm. This has increased market appetite for dollars, along with the strong pickup in US equities leading up to Apple’s event this week.

Of course there’s always the chance that geopolitical risks could pick up once more as North Korea has threatened to retaliate against the proposed sanctions. The UN Security Council has yet to vote on proposals but the US has reportedly scratched its threats on an oil embargo and freezing Kim Jong-un’s assets.

The lack of any new catalysts on the bitcoin front itself has also kept investors hesitant to load up on long positions. Traders appear to be waiting for more word on China’s regulations before taking any new bitcoin trades.