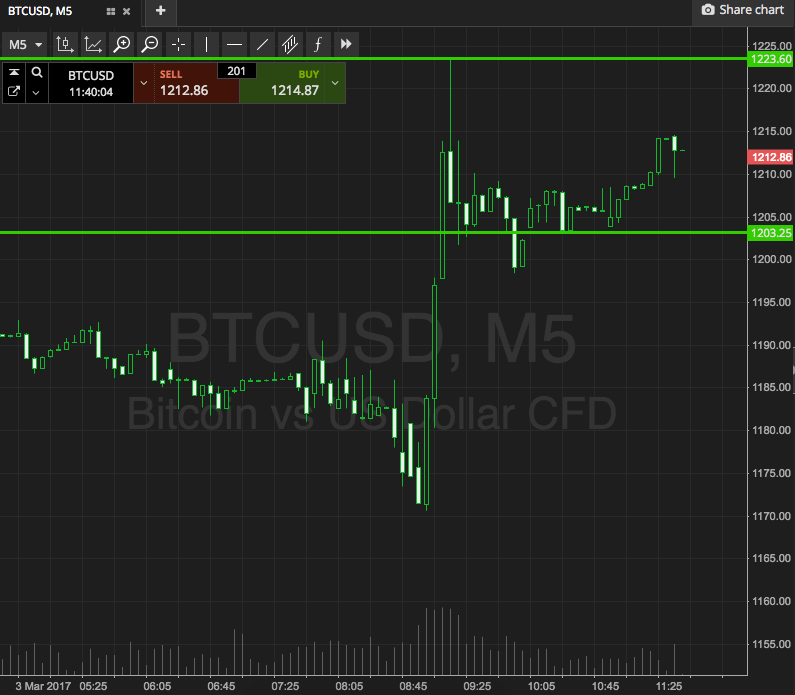 Those readers who checked in with us yesterday evening will already be familiar with the overnight strategy that we closed out the European session with. For those that missed our coverage, we basically through our standard operating procedure out of the window and decided to go at things with a new approach. Well, not new entirely, but new in the sense that we disregarded a downside entry and focused only on an upside position. The driver behind this decision was the proximity to the 1200 level that we’ve been looking at for a while. We said that if we saw a close above 1200, we would probably get a sustained momentum run to the upside (something that’s been missing over the last few weeks) and would be able to go after a reasonably aggressive target.

So, take a look at the chart below.

As it shows, we did get the break, and then the run, and we are still in an upside trade as things stand. Our initial upside target is 1225, so we’re not going to get into any more positions until this one matures to completion. It nearly did early on, but not quite, so it remains live.

For those that missed our entry call, however, there’s a range overlaid on the above chart that readers can use as a framework for the European session this morning. The range is defined by support to the downside at 1203, and resistance to the upside at 1223.

If price breaks through resistance, it will signal long towards 1235. A stop on the position at 1217 defines our risk on the trade. Conversely, a close below support will get us in short towards 1900. Again a stop is necessary, and somewhere in the region of 1207 looks good for the trade.