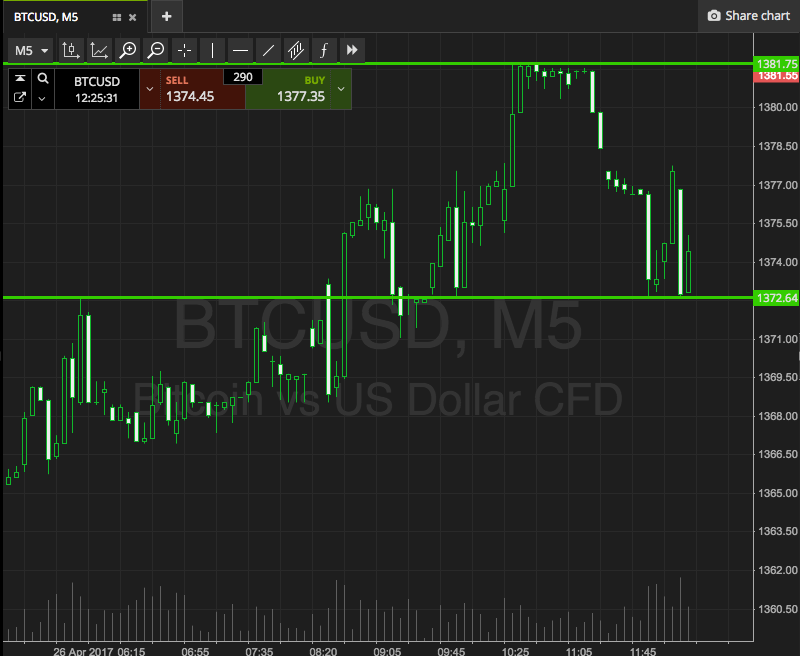 Another night’s worth of trading in the bitcoin price is now complete, and things have remained as volatile as they have been all week, heading into the midweek point. How things are going to play out during the second half of the week remains to be seen, but there’s a good chance (if volume stays high) that we’re going to see the bitcoin price test the 1400 mark. A couple of things should happen as and when we see this break. First, we should see a run (if we get a close above the 1400 threshold on the intraday charts) immediately post break. Second, we should see mainstream media start to pick up on the fact that price is logging new highs, and in turn, we should see some speculative buy volume flow in to the market.

That’s looking a little longer term, of course. From an intraday perspective there’s plenty for us to go at today, and so let’s take a look at what’s going on, and where we’re looking to get in and out of the markets.

Take a look at the chart below to get an idea of where things stand. It’s a five-minute candlestick chart and it’s got our key range overlaid in green.

As the chart shows, then, we’re looking at a range defined by support to the downside at 1372, and resistance to the upside at 1381. That’s a little too tight for an intrarange approach, so breakout only for the time being.

If we see a close above resistance, we’re going to look at getting in to a long trade towards an upside target of 1395. Conversely, a close below support will get us in to a short entry towards 1360. Stops just the other side of the entry will define risk for both positions.