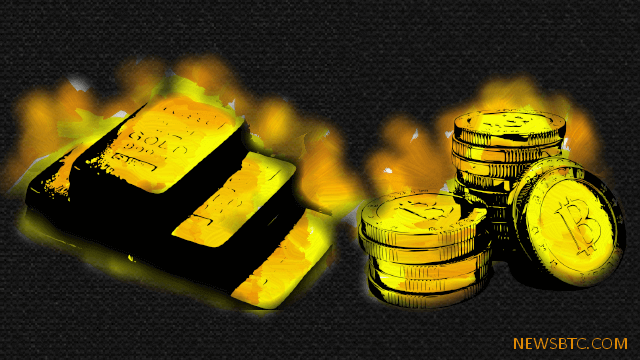 Bitcoin has had a great run this year so far and it is expected to further continue in the coming months due to various influencing factors. Faced with similar circumstances, the cryptocurrency’s physical counterpart — Gold is expected to showcase similar tendencies as well.

According to the Italian Bank — Intesa Sanpaolo, the price per troy ounce of gold is expected to climb from last week’s price of $1280.13, driven by current geopolitical tensions including the recent US airstrikes in Syria, Afghanistan, US policies on various things, escalating threats in relation to North Korea, Brexit, upcoming French elections and more.

Analysts suggest that gold’s price rise will be followed by a dip in the price sometime during mid-2017, only to rise again by the year end. One of the analysts from the bank, Daniela Corsini was quoted by a leading financial publication saying,

“Markets will surely remain nervous about this uncertainty and if economic data in the US remains strong, then gold will regain its role as an inflation hedge.”

The trend is not just limited to gold, but applicable to most of the precious metals.

The head of the commodity strategy at Saxo Bank, Ole Hansen was quoted by one of the news outlets saying,

“Short-term risk is skewed to the downside, but underlying support is there with the focus on political uncertainties. We see the yen continuing to strengthen, and a strong yen and strong gold have gone hand-in-hand since November… Also, expectations about the dollar are up for revision, the strong dollar story is fading. [US President Donald] Trump is talking it down, and we’re seeing weakness creep into US data, changing the perception of how much rates have to rise.”

Bitcoin is hailed as one of the very few assets which doesn’t have a direct correlation with conventional financial assets. In many instances, the digital currency’s performance has been completely opposite to that of the markets. The very feature of Bitcoin has gained it the recognition of being a safe haven asset, drawing the attention of many investors.

It has now become a common practice for many investors to diversify their portfolio by distributing it between conventional assets and Bitcoin. The increasing usage of Bitcoin has led to an increased demand, which is only going to increase further, in turn driving the price much higher.