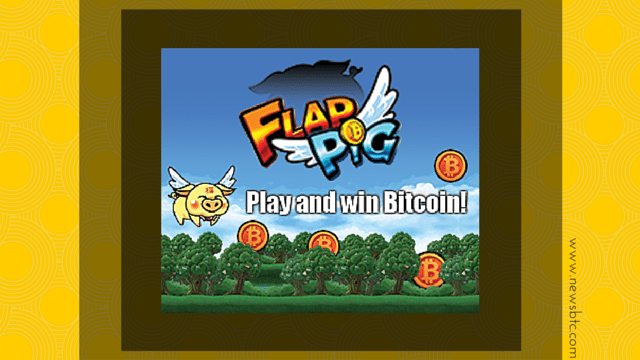 BitLanders’ FlapPig – a Flying Pig That Earns You Bitcoins

Most of us have heard about the game Flappy Bird and we have heard about Angry Birds as well, where the birds fight with the pigs. Now we have something new, which seems to be a combination of both and it’s called FlapPig. It’s a game where pigs have wings. If pigs can have wings, then gaining bitcoins for playing the game shouldn’t come as a surprise as well.

That’s what happens in FlapPig. Players can follow the story of the lead pig called Foo in this game of FlapPig created by bitLanders. The new game, launched two days ago on Google Play Store and Apple iOS app store works with the player’s bitLanders account.

The flying golden pig, Foo has a strange liking to the digital gold in this game. The pig keeps flying collecting as many bitcoins as possible, as the pig collects more bitcoins, the gamer will also get more bitcoins into his bitLanders account.

The game play of FlapPig can be related to that of Flappy Bird, where the player has to keep the pig afloat by tapping on the screen. During the beginning of the game, player will have to log-in into his bitLanders account so that the bitcoin generated can go into the gamer’s bitcoin wallet associated with his/her bitLanders account.

A game with bitcoin rewards is not new for bitLanders either. The company is built around bitcoins and social cause. It is a digital content platform where anyone can share content and earn bitcoin as rewards, depending upon the kind of interactions the content received in the hands of content consumers. While content creators can benefit by uploading and sharing content on bitLanders, content consumers also get rewards for interacting with the content and promoting it across their network. Deep down, bitLanders’ mission is to promote blockchain technology across the work and make it accessible to everyone.

bitCharities is another arm of bitLanders which acts as cause marketing platform. It introduces non-profits to bitcoins and connects them to brands and donors.

Tags: angry birdsbitCharitiesbitcoinbitcoin gameBitlandersblockchainFlapPiggameGames
Tweet123Share196ShareSend
Win up to $1,000,000 in One Spin at CryptoSlots