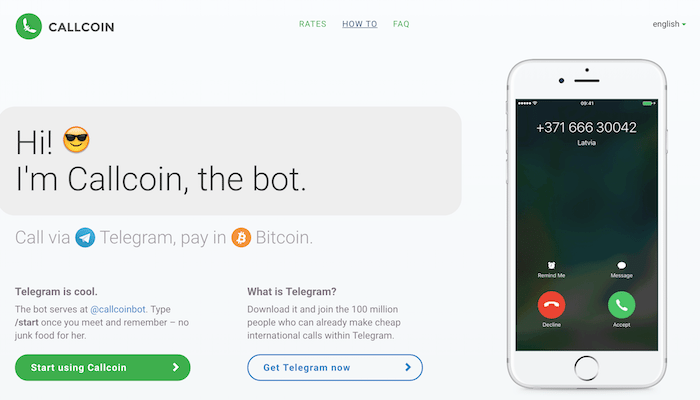 A group comprising developers from Latvia and Canada has launched a Telegram-based international calling service for Bitcoin users.

120 Minutes, the brain behind the creation of Callcoin, confirmed in its recent press release that they will be accepting Bitcoin as the only method of payment. It further explained how users will be able to access international calling feature. A translated version from the available excerpt:

In order to start using Callcoin, users will have to open their Telegram app, search for “@callcoinbot”. Upon joining the bot, they will be required to enter a phone number to receive callbacks and then they are done. First-time users will receive an EUR 0.5 credit for test calls along with an EU phone number on rent for 1 month.

In order to make a call, the user will have to either enter the number or select it from their address book. Upon selecting the number, they will receive a callback, connecting them to the number to which they wanted to call. Users can top up their Callcoin account either by paying with Bitcoin or by entering a previously purchased code. The Callcoin codes will be made available in stores selling digital goods.

The Callcoin bot on the instant messaging application of Russian origin is available in two languages; Russian and English. 120 Minutes expect at least 100,000 users to start using the bot within one year.

It is to note that Callcoin is not the first service that offers international calling for Bitcoin users. In past, there have been many companies that are working independently in offering similar calling features. But unlike Callcoin, they all rely on VoIP standards.

To name a few, VOIP Supply, Call with Us are some of the renowned calling services in Bitcoin community. Letsbrik.co has also impressed users for its ability to offer a Skype-like experience in making international and local calls.

Tags: bitcoinBitcoin Newscallcoincallinginternational callsNewstelegram bot
Tweet123Share196ShareSend
BitStarz Player Lands $2,459,124 Record Win! Could you be next big winner? Win up to $1,000,000 in One Spin at CryptoSlots