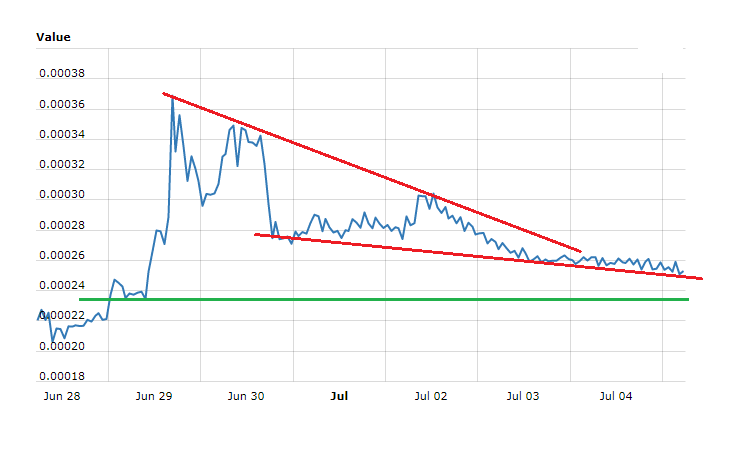 Creditbit price is again moving lower against the US Dollar and Bitcoin, and CRB/BTC could face further pressure for a test of 0.00022BTC.

Recently we saw a rise in Creditbit price towards the 0.00036BTC level against the Bitcoin. Later, the price faced resistance and started a downside move below 0.00035BTC. The move was such that the price broke the 0.00030BTC support and the 38.2% Fib retracement level of the last wave from the 0.00022BTC low to 0.00036BTC high. It ignited further losses below 0.00028BTC and the price is now remains at a risk of more declines.

On the downside, there is a support trend line forming at 0.00025BTC on the 7-day chart of CRB/BTC (data feed from Coinmarketcap). It is currently holding losses and preventing sharp losses below 0.00025BTC. However, the price remains at a risk of a break below 0.00025BTC. Once it breaks 0.00025BTC, there can be a push towards the all-important 0.00022BTC support area.

Hourly MACD – The MACD for the CRBIT/BTC pair has moved in the bearish zone.

Hourly RSI – The RSI for the CRBIT/BTC pair is below the 50 level and heading lower.