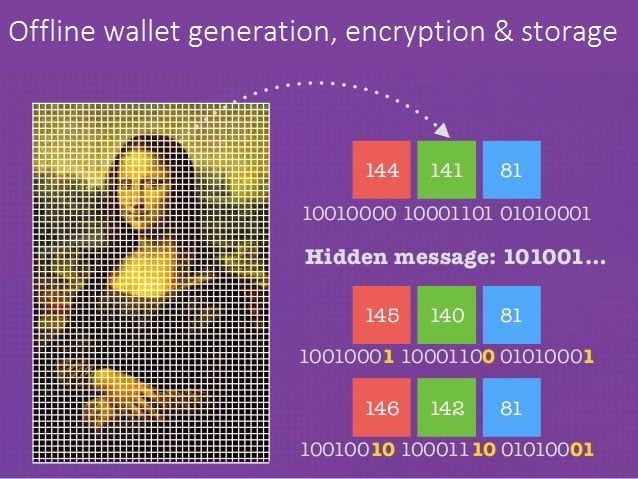 If you are a cryptographer or an avid reader of spy fiction, then you would know that data can be embedded into an image and transmitted across the internet without raising suspicions. But here, we are focusing on the security of Bitcoin wallets and effective ways of protecting the private keys and passwords.

One of the members on BitcoinTalk, Wisdom Oparaocha who goes by the screen name NyeFe has published a new open source security standard for securing Bitcoin cold wallets. The project called SSI Bitcoin Storage described by the original poster (OP) is said to use two cryptographic techniques, AES 128-bit encryption and Steganography to secure the wallet information.

According to NyeFe, the implementation of CryptoStandard SSI Bitcoin Storage Protocol involves the following steps,

Step 1 –  Creation of a Bitcoin wallet, where the wallet addresses are generated offline to prevent any leaks.

Step 3 – The encrypted wallet is then stored within the pixels of an image in the form of RGB data using Steganographic methods.

By following the steps one can create and store a secure Bitcoin wallet inside a regular image. The whole process is done using the CryptoStandard SSI Bitcoin Storage software. Anyone using the computer will just see an image without a clue about the actual worth of that image file.

NyeFe also includes a sample in the post, with two similar images of a flower. While there is nothing special about the first image, the one that follows, though identical holds a wallet with 100 cryptographic keys. In order to access it, the user has to download the CryptoStandard SSI Bitcoin Storage software and run the image through it.

Image 2 (the one with hidden wallet)

Included in the post are links to the GitHub repository where one can download the CryptoStandard SSI Bitcoin Storage software.

“CryptoStandard is mainly focused on open-source development of cross platform, offline or networked security software for established or new standards. “

While there are other players who are involved in the development of security standards software for the Cryptocurrency industry, none of them currently offers open-source software for all standards.

Those interested in trying the CryptoStandard Secure Bitcoin Storage software can do so by downloading it from GitHub at the following link.

Tags: bitcoinCryptoStandardsecuritySSIwallet
TweetShare
BitStarz Player Lands $2,459,124 Record Win! Could you be next big winner? Win up to $1,000,000 in One Spin at CryptoSlots