HelperBit Runs a Campaign Aid the Earthquake Survivors in Italy 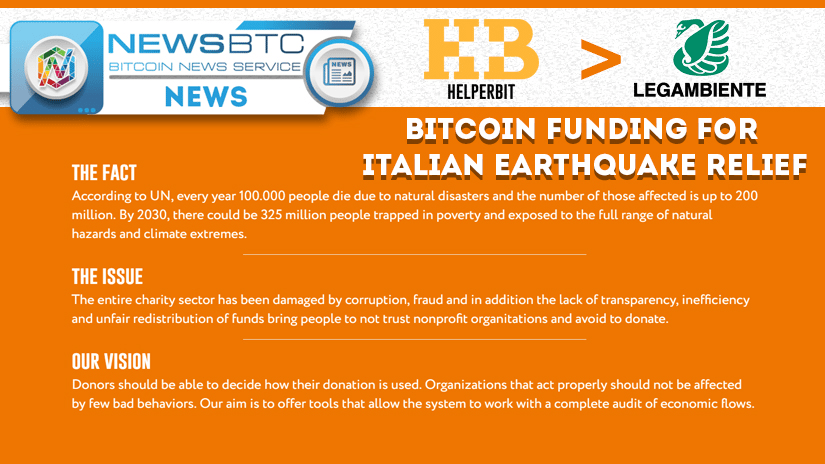 The use of Bitcoin as a currency has increased across the world. The digital currency is slowly making its way to become one of the mainstream currencies. These developments make the digital currency as an ideal asset for not just regular economic transactions, but also for charitable donations. In order to facilitate such charitable transactions, an Italian startup has created the HelperBit platform.

HelperBit has also demonstrated its effectiveness by successfully concluding a crowdfunding campaign to raise funds for the victims of the recent earthquakes that hit Italy. The Central Italian region has been affected by earthquakes since the past six months. The serious one, registering a magnitude of 6.0 on the Richter scale affected the country in August 2016 leading to loss of about 300 lives and billions of euros in damages.

Since the fateful day, the Central Italy has experienced a series of earthquakes of varying magnitudes. Every tremor has resulted in the loss of life, property or both. The agricultural and tourism industry in the region have borne the brunt of nature’s wrath, affecting the livelihood of thousands of people.

HelperBit collaborated with Legambiente to support the affected raise funds for reconstruction. The platform offered the infrastructure to create a multi-signature Bitcoin wallet and helped the organization raise money in the form of cryptocurrency from across the world. HelperBit has also helped bring transparency into the whole fundraising and disbursement process by making use of the blockchain technology.

The blockchain-based notarization service offered by HelperBit is helping Legambiente verify the authenticity of the relief requests before reimbursing the amount. In its recent blog, HelperBit gives an example of two farmers Ilaria and Lorenzo – owners of Societa Agricola Etiche Terre S.S. who suffered damages during the earthquake. They were able to benefit from “The Rebirth has a Young Heart” charity campaign by claiming relief for the expenses they incurred during the reconstruction process.

According to the blog, the farmers uploaded their invoice on HelperBit, requesting a refund for the expenditure. The authenticity of the refund request forwarded to Legambiente was verified by the organization before approving the Bitcoin transaction for reimbursement. The use of blockchain as made it possible for anyone to verify the transactions and track the usage of funds to confirm the legitimacy of the fundraising campaign.

The use of Bitcoin, multi-signature wallet systems and blockchain technology in charitable sector is clearly displayed by this initiative of HelperBit and Legambiente. It also opens doors for other charitable institutions and relief agencies from across the world to adopt cryptocurrency and its underlying technology for their operations.