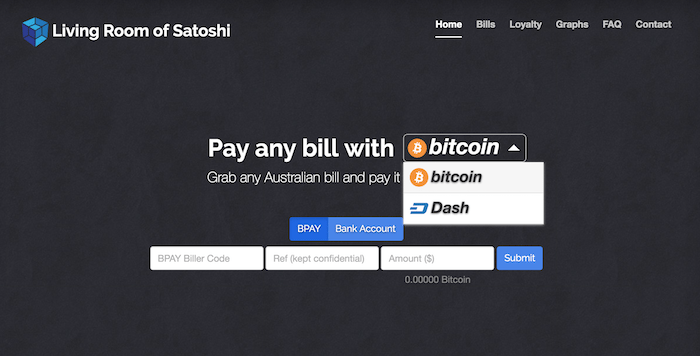 DASH on Living Room of Satoshi, Competition Heats up for BTC

Bitcoin is not the only cryptocurrency of importance anymore. The altcoin revolution that followed Bitcoin, thanks to the open source nature of Bitcoin code is slowly catching up with mainstream economy. Proving it is the recent development involving DASH — the 7th largest cryptocurrency in terms of market capitalization.

According to reports, DASH can now be used by Australian residents to directly pay their utility bills. The latest option is made available on Living Room of Satoshi platform following its integration with DASH cryptocurrency.

“We’ve tested other coins like Ethereum, but frequent hard forks and reliability issues made it unfeasible. Dash is perfectly suited as a payment system for bills and real world purchasing of goods and services. From the start, Dash was able to fill the holes Bitcoin created. Dash has the ability to effect transactions instantly, compared to prolonged bitcoin payments lagging over 10 minutes.”

Alexiuc’s statement also serves as a wake-up call for the Bitcoin developer community currently debating about the right way to scale the network instead of doing anything about. In the current scenario, DASH’s integration into Living Room of Satoshi is just a beginning of an impending shift from Bitcoin to other cryptocurrencies capable of much faster transactions for lesser fees.

Living Room of Satoshi users can now use both Bitcoin and DASH to pay rent, utility bills, insurance bills, phone bills, speeding fines, credit card debt and government tax bills through BPAY. In the past three-quarters of 2016, the platform has processed over $2 million (AUD) in cryptocurrency transactions. It may soon use DASH’s InstaSend technology to facilitate real-time bank transfers from anywhere into Australian bank accounts.

The competition is heating up for Bitcoin. It is now up to the Bitcoin developer and mining community to put their heads together and decide on a way to stay ahead in the game.

Get 110 USDT Futures Bonus for FREE!
Tags: bitcoinBitcoin Newsblockchain technologyDashliving room of satoshiNewsscaling bitcoinutility bills
Tweet123Share196ShareSend
BitStarz Player Lands $2,459,124 Record Win! Could you be next big winner? Win up to $1,000,000 in One Spin at CryptoSlots