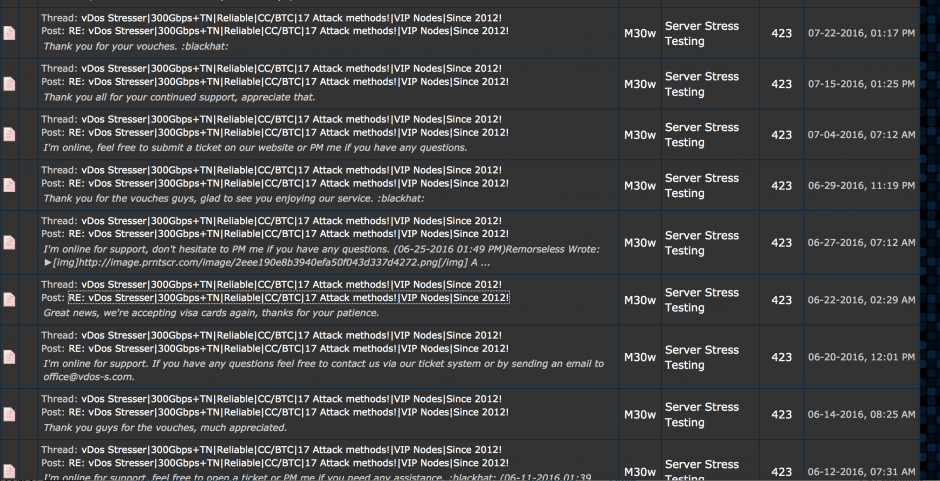 Who said it’s hard to find good help these days? If it has got anything to do with hacking or cyberattacks, darknet is the “go-to” place.  One can find many “cyberattacks for hire” listings on deepweb marketplaces and forums. While it’s hard to vouch for their effectiveness, recent arrests in Israel prove that some of those advertisements are indeed true.

According to reports, vDOS is one such attack for hire service which will not be doing business anymore. The people behind vDOS, Utay Huri and Yarden Bidani were arrested by Israeli law enforcement authorities for masterminding various DDoS attacks all over the internet. The arrests come after a well-known cybersecurity blog run by Brian Krebs unveiled their identities.

Huri and Bidani have been running vDOS booter service for over four years earning over $600,000 (in last two years) in Bitcoin and fiat currency payments through Coinbase and PayPal respectively. They had also received credit card and debit card payments from some of their customers in the past . The online service may have been responsible for over 150,000 DDoS attacks. Their identities surfaced after vDOS itself became the victim of a hacking attempt. The hackers behind vDOS attack leaked a massive database which contained information about its clientele and support services offered by other hackers from across the world.

The arrests came after US Federal Bureau of Investigation contacted the Israeli law enforcement authorities with an official request. The hacker duo have since been released after questioning. Both of them have furnished a bond of $10,000 and they continue to stay under house arrest for 10 days. They have been ordered not to use any telecommunication equipment or access internet for a period of one month.

Since running a story about vDOS and the identity of people behind it, KrebsOnSecurity has been under constant DDoS attack.  Huri and Bidani have been open about their activities with their personal information readily accessible to the public. Last month, the hackers have also published a technical paper on DDoS attack methods in Digital Whisper, an Israeli Security e-zine.

The website belonging to vDOS has been offline since Friday after being active for over 4 years to become one of the most profitable attack for hire service.

Tags: bitcoinBitcoin newscyberattacksdarknetddosdeepwebhackedhackingNewsvDOS
Tweet123Share196ShareSend
Win up to $1,000,000 in One Spin at CryptoSlots