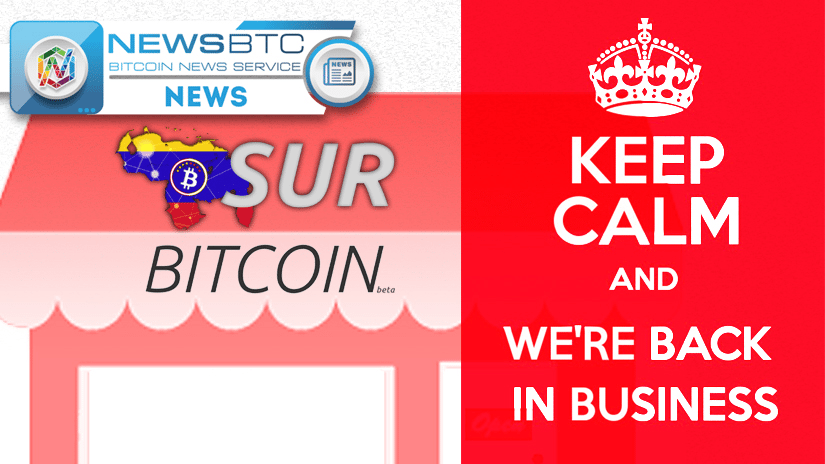 It is good news for the Bitcoin community in Venezuela. The country’s leading Bitcoin exchange, SurBitcoin will be back in business by next week.

It has been about 20 days since SurBitcoin stopped offering its service for the second time in a year. The platform, citing issues with the banking service provider, Banco Banesco had put a temporary hold on its operations. The bank had reportedly closed the exchange platform’s account, whose representatives have since been involved in discussions with Banesco to get the bank account restored. The recent status update on SurBitcoin’s Facebook page states that the operations will be reestablished in approximately one week’s time. A Spanish cryptocurrency news publication attributes the delays in resolution of banking issues to the long, bureaucratic processes of Banco Banesco. Once the issue is resolved, SurBitcoin will be able to handle fiat currency on the platform.

To minimize the inconvenience caused to the local cryptocurrency community, SurBitcoin has been offering guidance to them on using LocalBitcoins. The transaction volumes on LocalBitcoins have registered a massive increase since the beginning of this month. The development can be attributed to increased usage of the service by SurBitcoin’s customers.

It is still unclear as to what triggered the bank to close SurBitcoin’s account. The action was thought to be part of the government’s agenda to prevent Bitcoin usage in the country. The Venezuelan authorities have been cracking down on Bitcoin miners, arresting and charging them with power theft and cyber crime. So far, the law enforcement agencies have arrested about eight people involved in mining, confiscating over 11,000 mining units.

The worsening economic condition in Venezuela has pushed people to use Bitcoin instead of Bolivar for their regular usage. The increasing inflation rate predicted to cross over 1600% has affected the supply of basic goods and medicines. Many people have resorted to using Bitcoin to shop for essentials on online shopping platforms.

Once SurBitcoin gets back online, it will become easier for the bitcoin community to invest and transact in Bitcoins.

Tags: bitcoinBitcoin NewslocalbitcoinsNewsVenezuela
TweetShare
BitStarz Player Lands $2,459,124 Record Win! Could you be next big winner? Win up to $1,000,000 in One Spin at CryptoSlots