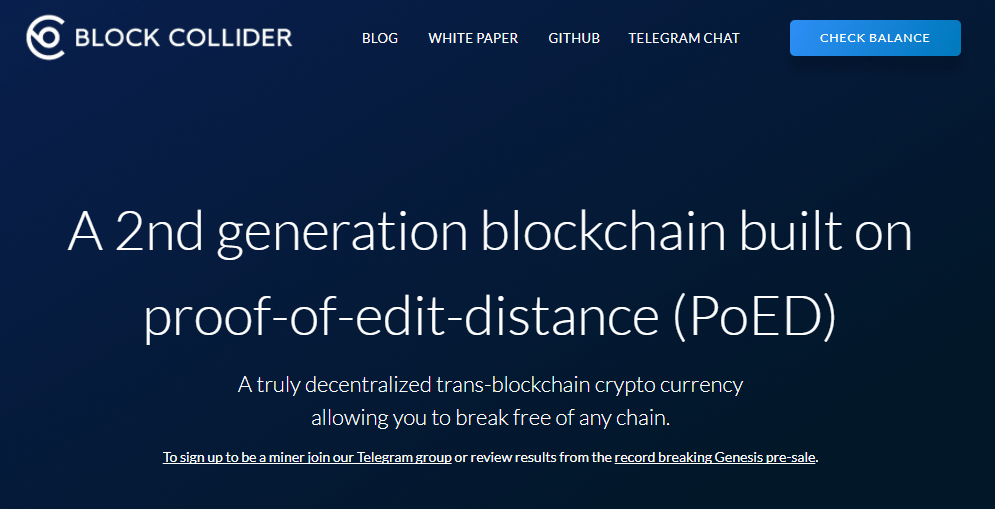 The Block Collider is the first blockchain to be built on the Financial Information eXchange (FIX) protocol which is used by hedge funds to conduct high-frequency trading. The team, ex-quants have developed a high-speed trans-blockchain cryptocurrency called Emblems which when coupled with a new mining algorithm called “proof-of-edit-distance” (PoED) which enables live swaps between blockchains, inter-block time trading, and most importantly the ability to schedule transactions to execute on their own.

To complement the complex technology and help with exploring the functionality of the protocol the team has developed a series of flagship applications built on the Block Collider. Leading these applications a chatbot named Avon. With Avon users can execute trades, send money, and manage their wallets across cryptocurrencies with simple back and forth messages. Currently Avon is integrated with Amazon Alexa and Telegram with 7 more integrations planned in 2018.

From a humanitarian side the team has also created Bleed which according to Co-Founder Patrick McConlogue is “what Wikileaks will look like in 5 years”. With Bleed individuals can encrypt secrets on multiple blockchains which reveal themselves unless the user executes a transaction only known by the user.

Bleed is useful immediately for whistleblowers who can state that if they are “silenced” all they know will be automatically decrypted and broadcast to the world. The somber name comes from the concept that if you hurt someone in the real world, you never know if the truths/secrets they carry will bleed online.

The Block Collider team is currently seeking interested miners looking to run software on the testnet and are hiring developers with experience in low latency networking, distributed systems, and cryptography.