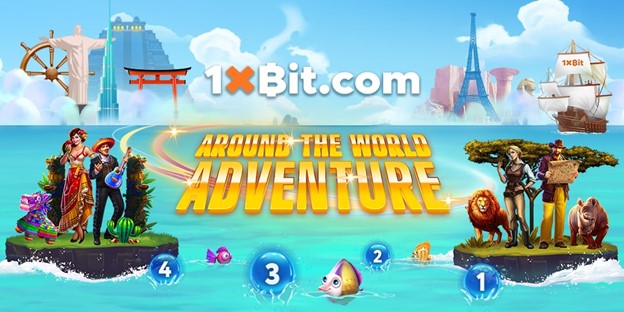 Press Release: For anyone stuck in the house, the 1xBit Around the World Adventure Tournament offers a classic treasure hunt with a chance to win big.

16th August 2022, Limassol, Cyprus — 1xBit has created clues on how to go around the world with players’ favorite slots and win a share of the 0.5 BTC prize fund. So it is time for the summer adventure as history will be around you and some lucky players; join the adventure to locate your treasure.

How to Join the Tournament

This summer, everyone has the opportunity to see the world and find crypto treasures when they join the Around the World Adventure Tournament. Around the World Adventure is a slot tournament held by1xBit in a bid to reward both the new and old players on the platform. As seen in this tournament, most crypto betting sites have never been this generous, with a high stake reward that multiple participants will share.

Around the World Adventure Tournament

The Around the World Adventure Tournament is made for everyone. Those interested just need to register on the 1xBit website, while registered players simply log in. The onboarding phase to take part in the offer starts with selecting a currency account and then clicking the “Take Part” button from the offer page – yes, it is that simple.

The currency account chosen will be used to fund a player’s journey in the tournament but clicking the take part button opens a new world where all can play any slot game from any providers and earn points on the way. Here is where it gets more interesting; the tournament was curated to reward the most consistent players. Thus, the more points earned, the higher the level players get in the tournament – obviously, going further on the leaderboard also increases the potential prize

When to Join the Adventure

The treasure hunt intends to be around for a while but only for a limited period. Anyone can join the Around the World Adventure Tournament from the 9th of August 2022. The hunt will continue until midnight on 8th September 2022, when the winners will be announced and rewarded with stash from the prize fund.

1xBit has mapped out a 0.5 mBTC prize fund for the Around the World Adventure Tournament. 1xBit will share the prize fund among the players with the most points. Most tournaments reward only about 10-12 players, but 1xBit has changed the narrative and intends to share the reward between 30 players. The player with the highest number of points will get 120 mBTC, while the second and third place will get 65 and 50 mBTC, respectively – the least amount to be won stands at 5 mBTC.

You Stand to Earn More With 1xBit

The uniqueness of 1xBit is linked to the different features, and solutions the crypto betting site provides; for instance, registration on the platform is easy because all players need is an email, and you get to enjoy a Welcome Bonus of up to 7 BTC for your first four deposits. There is also a chance to earn rewards from the regular tournaments and promotions on 1xBit.

Choice has never been a problem for the online sportsbook. All members have access to over 40 cryptocurrencies and a wide range of top game providers.

Other benefits like light-speed payouts and zero fees for every transaction make 1xBit more endearing to bettors. You will be amazed to hear that all your transactions on 1xBit are anonymous and secured by blockchain technology.

1xBit has unveiled tips on locating the most rewarding treasures, joining the hunt, playing consistently, and coming home with amazing rewards. Now is the time to lift your hands and get a piece of the adventure cake.

1xBit is the source of this content. This Press Release is for informational purposes only. The information does not constitute investment advice or an offer to invest