HIPE – ecosystem for business and life successfully conducts the pre-ICO 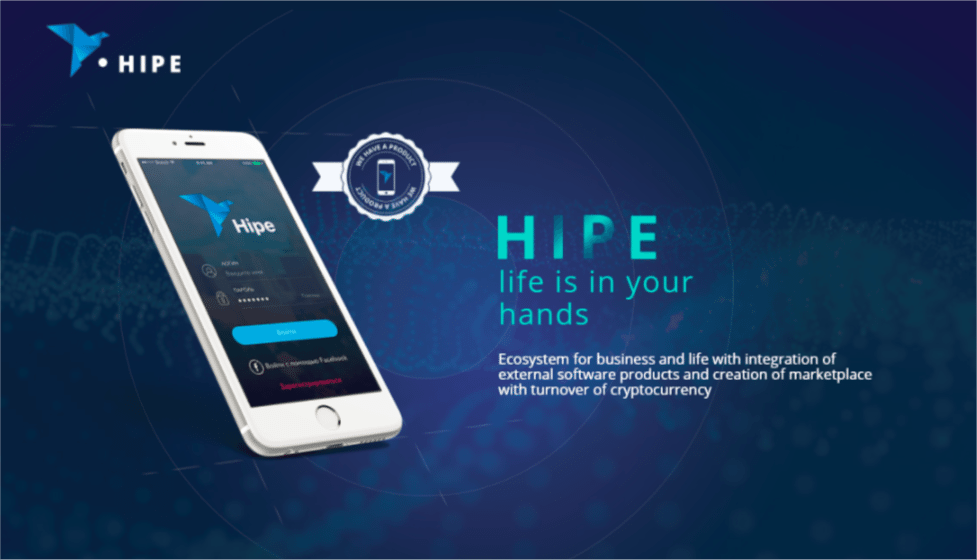 A lot of people today use many different applications, which have such disadvantages as a small number of functions, the inability to integrate with third-party services that the user needs, the lack of multipurpose solutions for business and personal communication, interaction of B2B and B2C companies with customers, the use of generally outdated approaches to business and private communication disregarding the globalization and the need to erase language and other barriers.

And the number of users of such imperfect applications constantly grows. For example, the target audience of the largest messengers is estimated at billions and hundreds of millions of users, and how many people and companies use calendars and maps, social networks and CRM systems, online translators and chats are not exactly known. All these functions are scattered across different applications that are not related to each other. During the day, we make dozens and hundreds of transitions from the application to the application to perform a particular function. How long does it take, no one has counted yet. But each of us understands that this time has been wasted.

How can one avoid wasting this extremely valuable resource when using gadgets? The number of applications that solve a particular problem is constantly growing, and there are no integrated approaches, especially for business, in the application market.

Introduction to the HIPE

With this problem in mind, a group of enthusiasts and experts have set out to build an efficient solution that can break down barriers in this field. This solution is called the HIPE – an innovative ecosystem for business and personal interaction with many useful functions for business and ordinary users. The HIPE platform – a new generation of applications for business and life with an integration of external software products and availability of marketplace with a turnover of cryptocurrency.

What is the HIPE and how does it work?

The desire to collect as many useful functions as possible on a convenient platform was the beginning of HIPE. The wish to reduce a wasted time to a minimum was the driving force of the project. The idea of creating a unique innovative eco-environment for business and personal interaction, for the ordinary man and business, overwhelmed the minds of developers.

Creators of the HIPE pragmatically included in the ecosystem all the functions that people are already accustomed to using daily. Besides, they added a lot of unique innovations in it. While the production of ideas and their implementation continues all the time. And it is easy to integrate such new ideas into the HIPE ecosystem due to the open API with a visual designer. So the possibilities for expanding the functions of the application and integration with external resources are unlimited. The HIPE platform opens the way for all users who have created their own unique services and applications. For the first time, the benefits of blockchain are used in the ecosystem. Also, the ecosystem has its own cloud storage. For mutual settlements of users, the system utilizes the internal currency – HIT tokens and the system of smart contracts.

The application already has a working version. The product works in a closed test mode so far. Selected subscribers who will send an application on the official website can become its users and take part in HIPE testing.

The HIPE platform features its own HIT token. It based on the Ethereum. The exchange rate of HIT token – 1 000 HIT = 1 ETH. The number of issued tokens – 35 850 000 HIT tokens. Distributed during its ongoing pre-ICO (from September 29, 2017, to October 13, 2017) and in its upcoming ICO, the HIT token will allow the project to become self-sufficient while making the HIPE a community-driven project that its user base can support. The advantages of HIT tokens:

– HIT tokens will provide their weight due to its turnover inside the ecosystem/marketplace, because payment for goods and services can be produced with their help;

– start trading on the exchange 30 days after the completion of ICO;

– potential rapid growth of the exchange value of HIT tokens on the open market due to the ability of integration any services through an open API with a visual designer;

– availability of a ready-made base version of the platform and a clear Roadmap with the release calendar of the next versions.

It should be noted that in the conditions of the HIPE’s ongoing fundraising interesting is the fact that the earlier the investor purchases the project’s tokens, the greater will be the size of the bonus provided to him. During the pre-ICO investors will be at once accrued bonuses at a rate of 40% to the amount of the purchased HIT tokens.  The company will also continue to provide a bonus for buying tokens in the first few weeks of the ICO, however, the bonus size will be several times smaller. Bonuses are calculated immediately when you buy.

During the first week of the pre-sale, there has already been successfully sold to 212 270 HIT tokens, attracted more than 67 thousand $ investment and about 56 investors. After the preliminary sale starts the first stage of the HIPE’s ICO.

The reasons for taking part in HIPE’s ICO

First of all the ability to integrate any services through an open API with a visual constructor provides a powerful growth potential for profitability and ecosystem development for the benefit of users and investors. Besides its own cryptocurrency will become a means of payment for goods and services within the ecosystem. It can be converted through stock exchanges with transfer to a bank card. Given all of the above, and also due to the lack of similar applications in the market, it can be assumed that after the ICO the exchange value of the HIT tokens will increase. Thus, participation in the HIPE’s crowdsale will allow you not only to join an interesting and advanced project in the field of mobile applications but also to receive a considerable profit in the future by selling HIT tokens on the open market.

More information about the HIPE can be found on their official website, where whitepaper, greenpaper, and other important documents are placed, in which there are presented the details of pre-ICO, ICO and the platform itself, or on the pages of the project on all popular social networks.