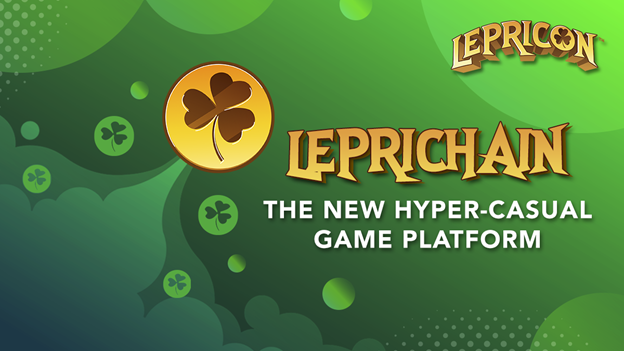 The hyper-casual gaming company, Lepricon, has launched a gas-less Ethereum side chain explicitly designed for their utility token, L3P.

Leprichain is compatible with all ERC-20 wallets and can be added to a wallet the same way a user adds Binance Smart Chain to a MetaMask Wallet.

“The trouble with Ethereum is that it is slow and expensive, two issues that make it almost impossible to develop hyper-casual games that would run on it,” explains Josh Galloway, Founder & CEO of Lepricon. “With Leprichain, players can connect their wallet to any web 3 compatible website that accepts L3P. As it is a private side chain for holders of L3P, there are no gas fees for transactions, and it is much faster than the usual Ethereum experience.”

Leprichain will form the basis of Lepricon’s hyper-casual gaming platform. Given that it is entirely compatible with Ethereum’s solidity contracts and uses a standard Web 3 connection, developers can easily incorporate L3P into their blockchain applications using readily available tools.

To onboard, users simply stake their L3P to Leprichain, where it becomes sL3P. While their L3P is on Leprichain, it earns a yield but remains a fully liquid token with any dApp they connect to with their wallet. “They simply need to change the network from Mainnet to Leprichain,” Galloway notes.

“Given that you would be using staked L3P that is earning a yield for transactions on Leprichain and that you can instantly unstake and transfer your L3P back to Mainnet with no gas fee or penalty, I think this might be the most liquid staking solution ever created for commercial use.”

The team at Lepricon, which has suffered some delays in product delivery since their original token launch in March, believe that Leprichain, and the ease with which it can be implemented, will usher in a resurgence of interest in the company and revitalize interest and demand for its token, L3P.

Game companies have often proven to be survivors in tough market conditions. Lepricon’s gas-less blockchain could be a game-changer for any blockchain games that are stifled by the high costs and low speed of operating on the Ethereum network.