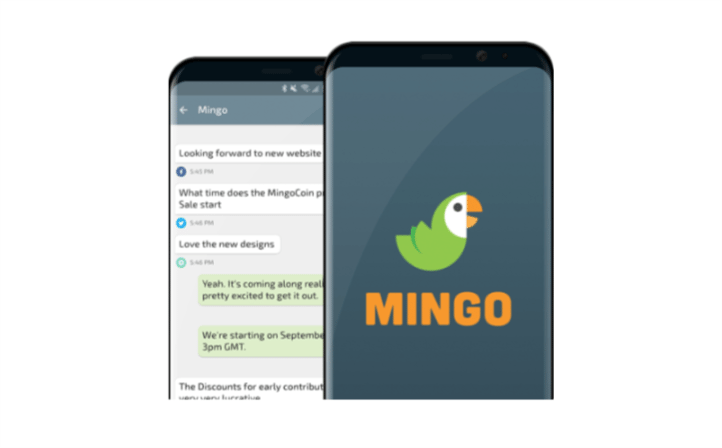 Mingo, the innovative cryptocurrency ecosystem backing the MingoMessenger – messaging application recently announced the launch of its pre-sale that started on 25, September 2017. The crowdsale, offering MingoTokens (MGT), the precursor token of MingoCoin (MGC) to the participants against ETH payments. The token sale received a great response from the community, attracting over EUR 650,000 worth of contribution within the first hour.

MingoCoin’s Presale event began with a big success, raising over 650,000 Euro in the first hour alone, with a target to raise 2,000,000 Euro until its completion. In order to encourage participation, the platform is offing early bird discounts to those joining the crowdsale. The discount slabs are as follows:

It means the sooner one joins, more tokens they stand to receive the same amount of ETH.

The math alone should make you contribute as soon as possible!

MingoCoin has an easy, straightforward process in place to facilitate participation in the token sale. Those willing to purchase the tokens can do so by visiting https://mingocoin.com/ and clicking on the “Contribute” button under the countdown timer. Following these actions, the user will be presented with a smart contract address to which the ETH transaction can be made. The platform recommends participants to set the gas limit at 200,000 and use a token-compatible wallet such as MyEtherWallet, Parity, or Mist. ETH from exchanges such as Coinbase will not be accepted.”

MingoCoin is a platform set to educate those who haven’t had any contact with the world of cryptocurrency until now. At the same time, it offers a host of features for advanced cryptocurrency users for added convenience and reliability. Apart from MingoCoin, the MingoWallet also supports other major cryptocurrencies like Bitcoin, Ethereum, Litecoin, Ripple or other altcoins.

MingoMessenger is a messaging platform that unifies users various messenger apps, to provide a single interface which can also support cryptocurrency transactions. Once joined, the user will receive 10 MGT tokens, and asked to invite ten friends by sending them 1 MGT token each. Once all ten users connect to the platform, they each receive 10 MGT for the same reason, and the original sender will be rewarded with 20 more MGT. This is called gamification, one of the core concepts of Mingo to reward users for executing easy and healthy activities, like sending 1 MGT to a friend (which is as easy as sending a message) and onboarding a new user.

The Pre-Sale will be followed by MingoWallet beta release in the 1st quarter of 2018, and also the ICO around the same period. To check more of the company’s future plans, visit the Roadmap on https://mingocoin.com/

Don’t forget to contribute as fast as possible so that you will get the most out of your contribution!

Tags: crowdsaleETHMGCmingocoin
TweetShare
BitStarz Player Lands $2,459,124 Record Win! Could you be next big winner? Win up to $1,000,000 in One Spin at CryptoSlots