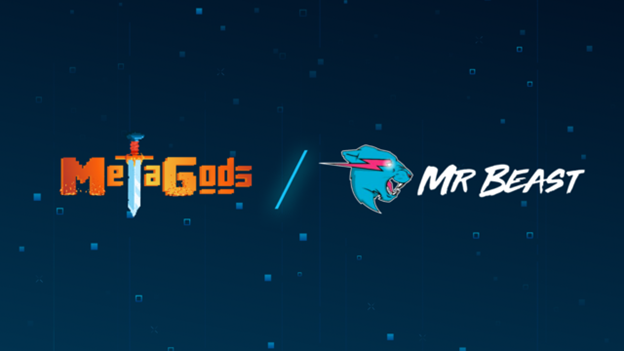 MetaGods, the first 8-bit play-to-earn action RPG built on the blockchain, has received a personal investment from popular content creator and YouTuber Mr. Beast. This marks a huge milestone in the development of MetaGods and the metaverse gaming world as a whole. The investment also comes very early in the project’s life, a sign of confidence in the future of MetaGods.

This is a huge boost to the team behind MetaGods and great news for the community.

MetaGods is an 8-bit action RPG, the first of such genre to use the play-to-earn model. In a new twist, some of the areas in MetaGods are so dangerous that characters who die there are lost forever. Yet, these areas have the best loot and provide the most experience per encounter.

It is this novel game mechanic that has attracted the attention of Mr Beast, one of the largest YouTubers on earth with 75.8 million subscribers and a public passion for video games. He has decided to back MetaGods and give the project his blessings. GameFi is clearly the future of the gaming industry and blockchain investing.

By partnering with Mr. Beast, MetaGods has the backing and the exposure of one of gaming’s most recognised names. A megaphone that can engage a huge audience, and grow the player user base organically.

MetaGods is well on its way to reach its intended audience. The community has been expanding quickly, and the MetaGods game shows no signs of stopping anytime soon.

What’s Next for MetaGods?

MetaGods is quickly preparing for its whitelist event. Players will soon be able to purchase their adventure packs for the game ahead of a public sale. MetaGods will be listed on GameFi Launchpad, and is looking to launch sometime in the near future.

MetaGods is the first action RPG on the blockchain where players compete alongside each other to attain godhood. It’s a play-to-earn metaverse that allows for two main game modes. First, casual mode… where players are able to experience the world and earn rewards slowly by staking their tokens accumulating XP and $RELIC tokens passively.

The more challenging mode introduces permadeath into the mix, but increases rewards both in APY and in legendary gear to create the most valuable characters. Users will have to enter these challenging areas using the $MGOD token and face the most dangerous areas of MetaGods for legendary loot and fame.