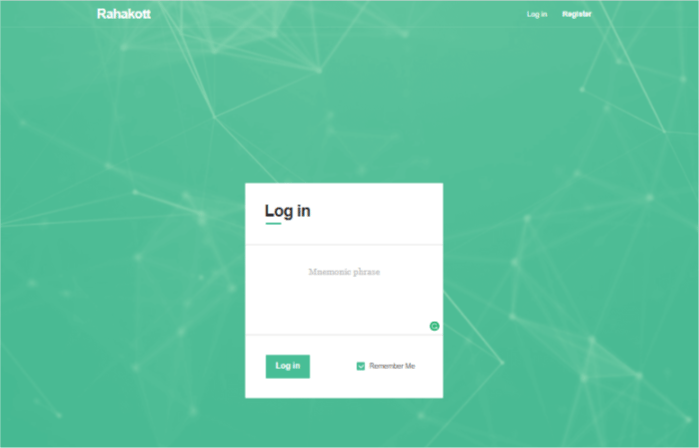 On November 12, 2017, a new project, Rahakott, was launched. Rahakott is a crytocurrency wallet that allows anyone to send or receive digital currencies and to monitor their balance. The surge in demand for cryptocurrencies drives demand for solutions that are more convenient and simpler to implement.

Digital currencies do not exist in physical form and are not stored in a single place. All that actually exist are transaction records in a blockchain. Therefore, when Bitcoin or other cryptocurrencies are transferred, the ownership rights to a certain amount are simply rewritten to your wallet’s address. However, to take control of that currency, the private key for your wallet has to match the public address to which the currency has been allocated. If they match, a withdrawal happens at one wallet and a deposit at the other. And all of this is just a record in the blockchain.

“The market does not currently offer that many choices of suitable, easy to use wallets that would give both security and speed in processing transactions,” comments Akke Svenson, the wallet’s founder. “We have had the audacity to address all the existing issues with the Rahakott wallet.”

The key issue is registration. It is on this step that some users simply cannot make sense of the system and go on to look elsewhere. The Rahakott service offers simple registration without email or phone, with just a mnemonic phrase.
Despite the simplicity of registration, the waller is well-protected from hacking by two-factor authentication. In addition, users that conduct business using cryptocurrency can set up subaccounts for their clients and generate requests for payment. Rahakott has functionality that allows batch generation of a large number of addresses. Miners have the ability to set a wallet address as to where they would like to receive their reward for mining.

The wallets are algoristic, meaning that a new address is generated for each transaction, which increases user anonymity. The existence of an API allows for the wallet’s functionality to be integrated into external web services and software.

“Rahakott went live on November 12,” says Akke Svenson. “We plan to keep perfecting the service’s functionality as we go. Our next step is to integrate currency exchanges, so that clients can choose the best exchange rates when converting to other cryptocurrencies and fiat currencies (P2P exchange). Our service serves to disrupt the status quo in the modern financial system, which is riddled with limitations, fees, and difficulties in processing transactions. We find ourselves at the starting point of a new, independent, and transparent financial future. And we’re building that world together!”

Akke Svenson, Rahakott.io cryptocurrency wallet founder
Entrepreneur, IT specialist, blockchain enthusiast. Graduated from the Royal Institute of Technology in Sweden and Stanford University in the US. He began his career at Ericsson, then worked on developing services for financial companies in Europe. For a few years, he served as CTO at a Silicon Valley fintech startup. After that, he returned to Sweden and founded his own company, specializing in IT consulting. He became interested in blockchain in 2013, believing that modern technology will help build new economic relationships in the world.

Maksim Shreyder, Rahakott.io cryptocurrency wallet cofounder
IT expert. Graduated from the Moscow Institute of Physics and Technology and the University of London. He began his career as a programmer, developed projects in the e-commerce sector, and headed IT departments at Russian and English companies. In 2015 he became interested in cryptocurrencies and mining.