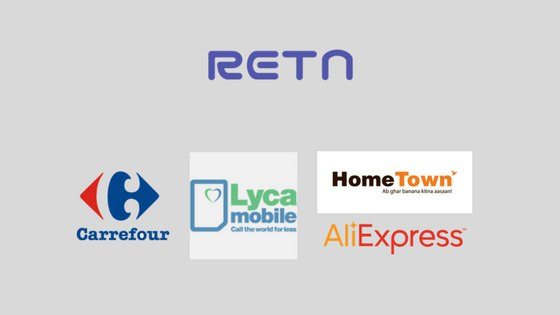 Retainly has been prompt in building its Blockchain based Distributed App and its Loyalty & Rewards Cryptocurrency RETN. While the Retainly DApp can allow businesses to create a crypto cashback for its loyal customers, the RETN deals network is proactive to partner with the world’s largest businesses. Applications from online businesses for early access to RETN DApp is open along with a deal sweetener of RETN 5000 as rewards to qualified businesses.

Among the recent partnerships announced by Retainly, Carrefour Brazil, Aliexpress, LycaMobile Australia, US based online ticketing OneTravel, India based Furniture & Home décor retailer Home Town, and South Korean online pharmacy Bodyguard Apotheke, are just a few. RETN deals will be able to extend significant discounts from these retailers from their online eCommerce stores and in addition to those discounts, consumers will get additional Cashback from RETN Deals.

While there are a couple of businesses that claim to offer cashback, most of such business do not give actual cash redemption option. Rather they allow consumers to redeem their cashback for discount vouchers or mobile recharge coupons. RETN deals will be the first business to offer cash with its cryptocurrency RETN.

More than 2 Million RETN Coins are already into circulation mostly held by crypto enthusiasts. Retainly ICO Presales Sprint 2 will open on 22nd January, 2018. However, RETN Deals will be able to allow mainstream consumers to receive cryptocurrency as rewards. That will be a significant contribution in increasing awareness and trust on cryptocurrencies.

The RETN DApp need not be used by e-Commerce companies alone, but any online business that considers loyalty to be the #1 marketing tactic to retain customers. SaaS platforms that are targeting to incentivize their users for platform usage, alternative fintech companies who want to reward customers for cross-sell and up-sell, and media publishers who intend to significantly increase audience engagement, can all effectively use the powerful APIs from RETN DApp.

Carrefour S.A. is a French multinational retailer headquartered in Boulogne, France. It is one of the largest hypermarket chains in the world.

Launched in 2010, AliExpress.com is an online retail service made up of small businesses in China and elsewhere offering products to international online buyers.