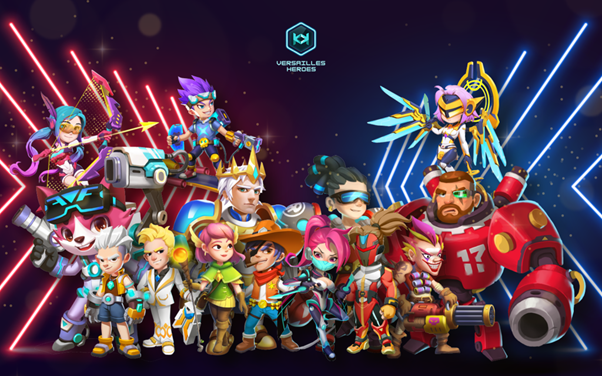 “Play-to-Earn” is a popular concept in the gaming industry that allows players to earn rewards for their time and effort. This model has been successful for many games but is particularly popular in NFT-based games, where players can earn various rewards like tokens.

The rise in popularity of “Play-to-Earn” games is attributed to the advantage of offering players a way to earn rewards that have real-world value. This is in contrast to traditional games, which only offer in-game rewards that are worthless outside of the game itself. For many players, the opportunity to earn real-world rewards is a major incentive to play these games.

More excitement and entertainment than ever before

Versailles Heroes is a multi-player online battle arena game in which players (solo or in teams) compete for possession of the map. To succeed, players must outmaneuver their opponents and gain control of the battlefield using their brains and strategic skills. The game employs blockchain technology to maintain an immutable record of in-game behaviors, allowing players to receive prizes for their accomplishments.

Versailles Heroes emphasizes teamwork and strategy. The game’s NFT heroes are masterfully developed for seamless combat and matching, with their unique abilities and capabilities utilized throughout the game. The NFT heroes can be found in the marketplace as well as from their unique mystery boxes which contain different rarity of heroes.

Users gain digital ownership of the NFT heroes they purchase, allowing them to sell the asset for digital currencies.

Taking the game to the next level

“Play-to-Earn” games have been gaining popularity over the past few years as a way for gamers to earn rewards for their gameplay. These rewards can come in the form of in-game items, digital currency, or even real-world prizes. Versailles Heroes is one of the hottest upcoming games in 2022, thanks to its unique NFT game art and innovative blockchain technology.

Versailles Heroes is a multiplayer online battle arena game managed by smart contracts for DAO administration and operates in the GameFi and Metaverse sectors. Versailles Heroes’ purpose is to develop a blockchain game that its users fully govern, placing its trading and governance rules onto the blockchain to achieve the ultimate open, unbiased, and decentralized governance model.

Versailles Heroes has caught the interest of the blockchain community with its recent whitelist event. The event, which was meant to span a month, filled 10,000 slots in just 48 hours. Furthermore, the project has reached over 100,000 followers on social media in just one month, while the Versailles Heroes Discord channel has over 46,000 members.

The success of the whitelist event and the project’s popularity on social media show that Versailles Heroes is attracting many interested parties. The project has captured the blockchain community’s attention and is well on its way to becoming a leading player in the blockchain gaming space.

Gamers are encouraged to check out games that offer the chance to earn real-world rewards and are transparent and fair, starting with “Play-to-Earn” games like Versailles Heroes.