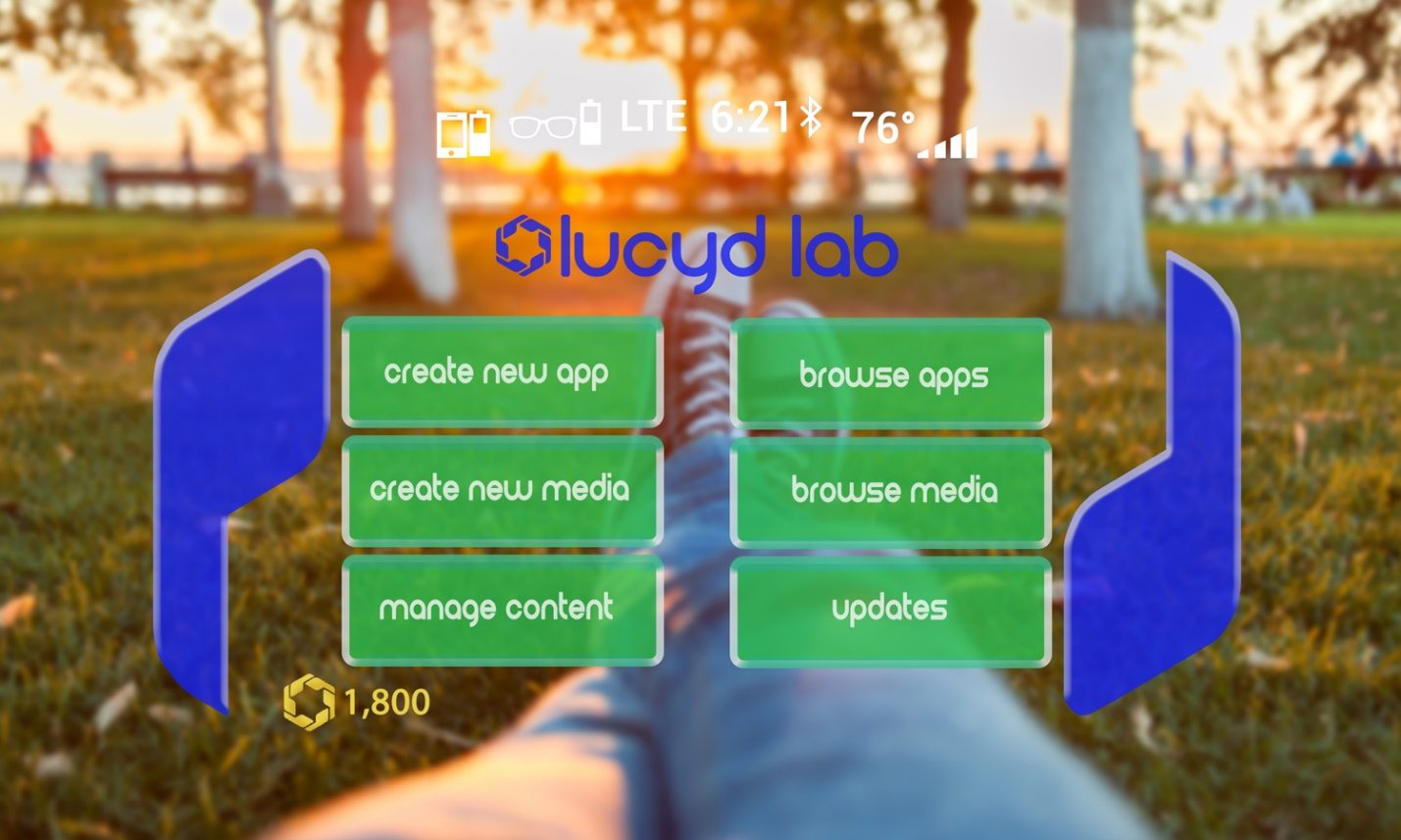 Augmented reality has the ability to power a handsfree computing revolution, enhancing the visual experience with seamless virtual interfaces. What that amounts to in practical terms is that smartglasses can eventually replace many hand-held computing platforms, by converging their essential functions into a single wearable display device. In the future, smartglasses can potentially perform all functions currently done by smartphones, PCs, tablets, and stand-alone consumer electronics like televisions and radios. Therefore, it seems not only logical but likely that AR displays will become the standard for many tasks in the future.

Lucyd has exclusively licensed 13 AR patents, and assembled a team of thought leaders in optics and AR to help realize their mission to build Lucyd Lens, the first blockchain-fueled smartglasses. Lucyd is developing a next-gen pair of smartglasses that can become truly mainstream, since they will address many issues in currently available AR products, like prescription lens incompatibility and narrow EFV (enhanced field of view). Lucyd will seek to bolster their smartglasses with a blockchain app store and LCD utility token to unify AR content and its users on a single, peer-to-peer financial network. Lucyd believes the Lucyd Lab blockchain will enable rapid in-AR transactions, and organically reward app developers based on community feedback. This brief article is going to explore some potential applications of Lucyd Lens hardware, and how blockchain has the potential to greatly enhance and accelerate the development of an AR content ecosystem.

Truly user-friendly smartglasses will have an unlimited number of useful applications, from work to home, around town and on the road. Essentially, the purpose of AR is to port everything we currently need computing devices for into a comfortable, wearable, handsfree device. That’s what Lucyd Lens is trying to do, to free users from the constraint of having to look away from the world for information, with an adaptive interface that spans a spectrum of immersion from none to complete. Our goal is when you don’t need the Lens, it will revert to ordinary glasses. When you do, it will provide an interface with a wide range of AR applications to assist you in almost any task. Lucyd believes this dynamic nature is necessary for ergonomic all-day wear of smartglasses.

Perhaps one of the most important application of smartglasses is to help prevent distracted driving. By having a customizable, heads-up AR display, Lucyd Lens could help keep your eyes on the road. Need directions, but don’t want to look at a phone or GPS? No problem, the Lens will be able to show you or read out your next turn to you. Want to see your gauges in a bright digital display, so you don’t have to look down at your dashboard? Lens could connect to your car via Bluetooth to relay information from the onboard computer. Want to control your music faster and with a more natural interface? Certainly possible with AR. Lucyd believes all of these features, if executed properly, will add up to a safer driving experience. Similar interfaces can assist with use of other vehicles, and while walking around town, running or cycling. In fact, many air force pilots are already using monocular AR displays for real time guidance and vital information. The Elbit Systems Targo II helmet-mounted system relays real-time avionics to a pilot’s helmet, displaying them in an AR lens. If AR can assist military pilots in navigation, then it follows that it can do the same for the average driver.

Shopping is another daily task that can be greatly enhanced by AR. By simply looking at a QR code for a second, one could pull up any amount of information and user reviews on a product. Lens can also provide easy tracking of your to-do and grocery lists, so you never miss a beat. Instant price comparisons with similar products online is also possible, thanks to sophisticated AI image recognition algorithms. Finally, smartglasses can integrate all of your wallets into one, for rapid payments with any currency through Apple Pay-style RFID payments in person, and fiat, crypto and LCD payments online. Lucyd believes that in the near future, you could potentially look at a point-of-sale card reader with the Lens, get an AR prompt about the purchase, and vocally confirm payment. A number of security measures will could be implemented, such as voice pattern recognition, or retina scanning to help prevent unauthorized use of the Lens, making your transactions safer than ever before. In the future, not only can smartglasses potentially replace your phone, they can also replace your wallet.

Lucyd has formed a strategic alliance with ROAR, an innovative AR app developer and dev kit producer. ROAR has a number of shopping apps already released, and Lucyd has teamed up with them to make their products available on Lucyd Lens from the get-go. Both virtual and real-world shopping experiences could be greatly improved by adding ROAR AR-native software to Lucyd hardware.

Gaming is another area headed for a major revolution thanks to AR. Nothing is more elaborate and beautiful than the real world, and AR opens a huge canvas of possibilities for layering gaming content onto reality. Imagine, at any moment in time you can drop into the action. Just a walk through the woods can become a quest for glory—and thanks to Lucyd’s blockchain, in-app purchases with the LCD token could be seamlessly integrated into any game. Lucyd believes this will both improve the user experience and enhance app developer revenues. As AR technology improves, the gaming experiences can potentially expand way beyond Pokémon GO™, into richly-textured, dynamic overlays adding highly interactive virtual elements to the real world. At the same time, traditional 2D and VR games can also be displayed by the Lens, offering a full gamut of gaming options from simple AR Tetris to a “real” World of Warcraft™. Lucyd Lens could make it so that anywhere, anytime can be game time.

Augmented reality also offers tremendous potential in the world of communication, and assisting with audiovisual impairments. Real-time recognition and translation between text and speech is possible with AR technology, potentially opening up much faster communication between speakers of different languages and those with hearing impairments. A use case for this might be a conversation with a colleague that prefers a different language from your own, and having their words spoken or displayed to you in your primary tongue. For a hearing-impaired individual, they could have the Lens display anything that is spoken to them in text format, and indicate proximity of potential hazards based on their sound. For example, the Lens could create a visual alert to indicate a car is approaching from behind. For a sight-impaired individual, AR technology has the potential to enhance brightness, enable digital zoom for easy reading, or turn visual cues captured by the onboard camera into audio alerts, such as sounding a tone when there is a hazard immediately in front of the wearer. With sound localization and various lengths and types of tones, a significant amount of visual information could be relayed to the sight-impaired. Sight-impaired individuals have responded positively to existing AR devices such as NuEyesTM, demonstrating real potential for AR to help those with sensory impairment.

Integration with blockchain technology offers a number of key functions to Lucyd’s proposed AR app ecosystem, greatly enhancing the developer environment for the Lens. By creating the LCD token, Lucyd seeks to create an engaged and well-connected userbase to develop, distribute and experience new AR content. Unlike existing smartphone ecosystems that charge developers high fees for quality control and management of content, the Lucyd platform decentralizes this oversight to the user community. All revenues on the Lucyd platform will be paid in the LCD token, based on community impact. The more positive reviews and downloads an app receives, the more LCD is “mined” from the blockchain, naturally encouraging developers to create high-quality content. Users can also be rewarded for engagement with in-app actions like referrals, beta testing, bug reporting, ratings and so forth, giving developers the opportunity to drive specific user actions with LCD. Lucyd believes the blockchain also enables rapid peer-to-peer transactions in AR with the LCD token, with the Lens potentially acting as a secure hardware wallet for LCD.

By empowering their smartglass hardware with blockchain, Lucyd wants to create a borderless community around the Lens, where open exchange of apps, media and value occur on an unrestricted basis around the LCD token. This level of connectivity in the userbase, and ease of transactions, Lucyd believes is only possible by uniting AR with blockchain technology. As a result, Lucyd Lens is positioning itself to become the world’s first blockchain-fueled smartglasses.